Star Of Epix’s “From,” Harold Perrineau, Talks Monsters And Human Connections In The Series 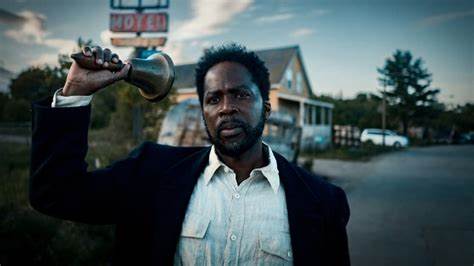 One of the best new series of the year, Epix’s “From” is headed your way this February. Ahead of its premiere, I sat down with talented actor and series star Harold Perrineau, who you’ll recognize from his role in films like the Matrix franchise, and series such as “Criminal Minds,” “Z Nation”, “Claws,” and “OZ” in which he gave a brilliant performance.

Harold stars as Sheriff Boyd Stevens in “From,” which sees a family is stuck in a time loop and forced to acclimate to a town made up of stranded travelers. Just when they think things couldn’t get any worse, they discover that when the sun goes down and terrifying monsters come out to hunt.

Kelli McNeely: “So tell me about this Sheriff. What kind of man is he?”

Harold Perrineau: “Boyd Stevens, he’s a complicated guy, he is a man of service. I think that is first and foremost where he lands or where he lives. And he finds himself like everybody else in this town in what is considered a desperate situation. And so he’s got an agenda in his service, which is to make sure that everyone stays protected while he finds their way out. And he is going to do that, and nobody is going to stop him from keeping everyone safe. He can be quite complicated, though. He simply, I think, wants to be of service.”

Kelli McNeely: “I think he’s a great character. He’s going through so much. There are a lot of moments where he is just in emotional turmoil. What is going through your mind when he’s experiencing those things?”

Harold Perrineau: “I’m usually thinking about lunch or maybe when I’m going to have dinner [laughter]. No. One of the things that I try hard to do when we’re doing this is trying to ground the characters in things that are real. Do you know what I mean? You could go off on a tangent thinking about, like, the monsters of it all or what kind of town it is. But that isn’t the thing that the audience is going to connect to. They’re going to connect to whatever the reality of this human being, whatever the circumstances that this human being finds themselves in. And how did they deal with those circumstances? So in those moments that when you find Boyd in terrible turmoil, I think that in those moments, I’m in quite a bit of terrible turmoil. Whatever the things I can consider, there’s an episode, and I don’t think it’s giving away too much since you’ve seen it all. When he’s considering the box that he’s built for this town and his actual purpose and the actual use of it for its purpose, those are hard decisions to make, and he’s the only one that can make them. And so whenever I have those kind of things, I put myself in a place where I have to make choices that feel like life and death, and then I try to be in that kind of turmoil so that hopefully the audience can resonate with that feeling because often we have to make really terrible choices, and there’s no good way to end some things, but you have to choose.”

Kelli McNeely: “Right. And that thing was actually what kind of inspired that question. You can tell that he’s in so much pain and regret.  What do you find is the most frightening aspect of the series? Is it the creatures? Is it the being stuck? What is it to you?”

Harold Perrineau: “This is an interesting question to answer because, for me, part of it is the most frightening thing about it is that my son is stuck. But that’s for me. But I think for the audience, the most frightening thing about it is whatever they can imagine. And that’s the thing I think that’s really great about the show. There’s some blood and guts and stuff in there and there are scary moments, but I think a lot of what’s scary is what the audience anticipates could be happening or might happen or what they would do if they were there. That’s the scariest part of the show for me. When you start thinking, ‘Oh, God.’ if you go into what’s going to whatever your imagination is doing, that’s the bit that’s scary for me, Harold, looking at it or for me as Boyd looking at it, then I’m stuck and my son is stuck. Here is the scariest part for me as the dad. When you have circumstances and no matter how you try, you cannot change them for your children. And if they still could be in peril, that is frightening for me. And it makes me feel a bit like a caged lion in that I will do whatever it takes to protect them.”

Kelli McNeely: “And I have to say his decision kind of caught me by surprise. I wasn’t expecting that. ”

Harold Perrineau: “Yeah. And I think it catches him sideways, too. I think he thought he wouldn’t have to make a decision. And then I think he feels like, ‘Well, I didn’t make the decision. Someone else did.’ That’s what I love about the show. It’s really complex. It’s not like this or that. It’s like this and a little bit of that and a lot of that and some of this over here, that’s when it gets really interesting.”

Kelli McNeely: “Yes, exactly. Andhe monsters are so creepy, but it seems that show is more about family and the characters’ struggles to me than it is about them.”

Harold Perrineau: “Exactly. And that’s what I mean. Like, this is a show really about people and their families and their connections in the world. And when there are dire circumstances. What becomes really important is your family is your friends, your community, and the protection and safety thereof when there are scary moments. And that’s what I think the show is about. It is the connections that we all have to each other. Our chosen family or our blood-related family, we start really digging into those connections, especially during trauma.”

Kelli McNeely: “Right, it’s the human element. And when it comes to the monsters, what part kind of gets under your skin about them the most? They look so normal, but they are definitely not.”

Harold Perrineau: “They do it first, but when you get to see them, they’re creepy. They are scary. I know in the first couple of episodes, you get a flash of it, but they’re frightening and they’re based on a bunch of different things. And I guess if you and I get to talk again, and I hope we do after the show has been on, we’ll talk about the creation of those monsters and where they come from. But where they come from really are things that people think are icky. Anyway, if you see a smaller version of any of the things that are part of this composite that makes the monsters, you’d be like, oh, that’s so icky. That’s where the monsters are. They’re scary and they’re gross and they’re creepy and they slowly walk to devour you. It’s like everything that you hate.”

Kelli McNeely: “It’s like the classic killers from horror movies. None of them run. They all walk.”

Harold Perrineau: “They just walk because you know why? You’ve got nowhere to go. That’s scary.”

Kelli McNeely: “Was there a moment during filming for the first few episodes that you got freaked out?”

Harold Perrineau: “The monsters freak me out bad. And there’s a sequence in the second episode where the nurse, Christie has a bad dream about the monsters, and it involves Simon, who plays Ethan, the little boy, we have to sort of confront the monster. And aside from the monster being creepy for us, when he’s confronted by the monster for the very first time, the young actor Simon, yelled ‘cut’. And he goes, ‘Oh, wow, Harold, that was really scary.’ As you can see in the episode, hews on the verge of tears. And for me, that freaked me out. And so I was like, ‘I know, bud, but we’re just pretending, right?’ He’s like, ‘Yeah, it was scary.’ And I thought, ‘Yeah, I know.’ I asked ‘What do you think? You can do it again?’ And he said ‘I think so.’ And then we do it again. And you just see the tears are flowing. So things like that, that still creep me out. It still makes me feel really bad. He was so scared, trying so hard to be brave because he knew we were just on a film set. But it’s scary out as a dad, as a grown-up actor on the set, and the monster is creepy.”

Kelli McNeely: “Oh, poor kid. I have to say, he does an amazing job though. It brings realism to the series, which I think is fantastic. It’s so intense.”

Be sure to catch Harold Perrineau in “From”, premiering exclusively on Epix on February 20, 2022. It’s a fantastic series that is unnerving, and somehow touching all at once. This is a series you do not want to miss!

← Prev: Trailer Arrives For Irish Legend Inspired Horror 'You're Not My Mother' Next: Taye Diggs Conjures A Demon This February In 'Incarnation' (Trailer) →