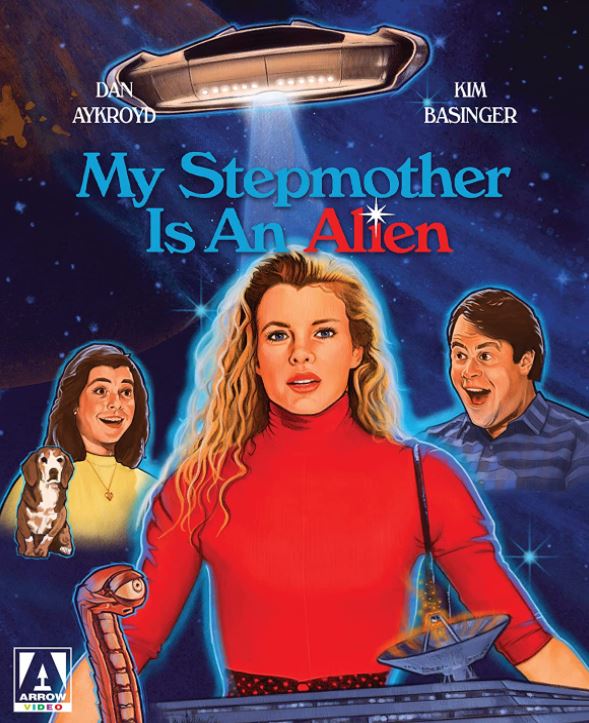 My Stepmother is an Alien begins with Tom Jones’ cover of Prince’s Kiss, and every woman over the age of 65 within a mile from my dread dwelling spontaneously came.

Once that was mopped up, I could carry on with my sinister synopsis…

Widowed scientist Steven Mills (Dan Aykroyd) accidentally shoots a beam into space that effects the gravity of a planet light years away.

While being a cheerleader for her Dad’s sex-life, Mills’ daughter Jessie (Buffy alum/band camp story generator Alyson Hannigan, albeit in child format) becomes suspicious of Celeste when she sees her doing weird alien shit like chuggin’ batteries… but not because she appears to be completely insane and immediately married her fool of a father.

Will Mills be able to prove his innocence in decimating an entire planet, or will he cause Earth’s destruction… and will he get laid again?!!

If there’s one thing the Richard Benjamin directed My Stepmother is an Alien is it’s covered in mounds of ’80s cheese. Glorious, tasty cheese. The jokes are corny, the situations overdone, there’s a weird fetishism of Jimmy Durante… but the cast is fantastic, and the film has gobs of heart, so it’s a win/win in my beastly book!

About that cast, we get the ever-charming Aykroyd playing his typical lovable nerd (if it ain’t broke, don’t fix it!), and Basinger giving a wonderfully screwball turn… add into that strong supporting turns from Hannigan and SNL alum Jon Lovitz… not to mention an early turn from Natural Born Killers‘ Juliette Lewis, and a scene stealing performance from Joseph Maher as Mills’ uptight and clueless boss, Budlong and you got solid chops right there boils n’ ghouls!

Also of note are the top-shelf flying saucer effects courtesy of John Dykstra (Star Wars to name just one among many) and his crew; it’s beautifully realized practical effects wizardry and it’s the total shit!

Speaking of total shit from the opposite end of the spectrum, Arrow’s new 2K restoration from the original camera negative is so crisp that there are some serious matte lines visible during some of the optical effects sequences that weren’t so egregious when we watched this flick on dogshit quality VHS… so win some you lose some…

Fret not, dear readers as the pendulum swings the other way with the special features present on this Blu-ray from Arrow Video, with a fantastic informative audio commentary track courtesy of author and critic Bryan Reesman, an audio interview with Benjamin, the film’s trailer, and a brief image gallery comprising the offerings at hand.

Also included are a reversible sleeve featuring new artwork by Colin Murdoch, and if you grab this one in it’s first printing, you get an illustrated collector’s booklet featuring new writing on the film by author Amanda Reyes.

Funny, flaky, and fuckin’ ridiculous, My Stepmother is an Alien is a sure fire taste treat for those that crave far out ’80s cheese mixed with sci-fi flick shenanigans!