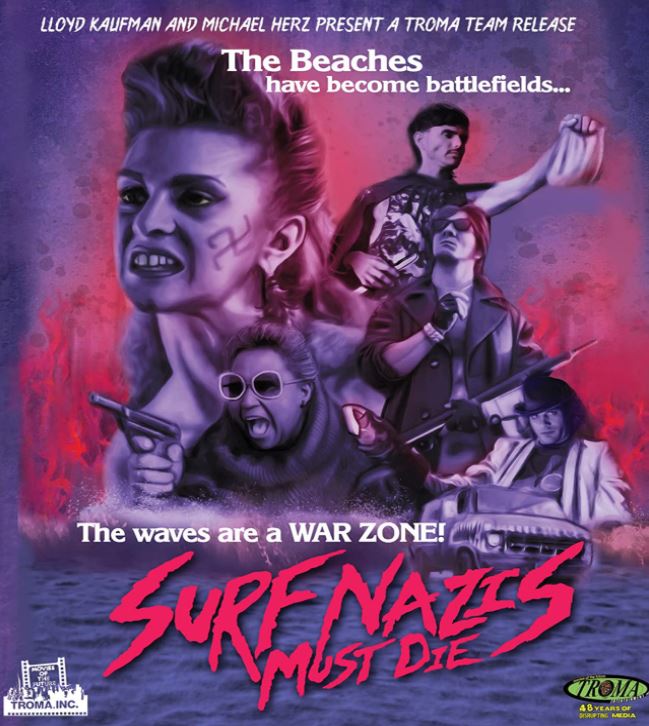 After a suitably bananas intro featuring Troma Team head honcho Lloyd Kaufman we are whisked away to “sometime in the near future”, and thus begins the Blu-ray edition of 1987’s Surf Nazis Must Die!

After a cataclysmic earthquake, California’s beaches are run by rival gangs, but all are ruled by the Surf Nazi’s fronted by egomaniacal psychopath/former economics major Adolf (a completely scene devouring Barry Brenner) and his second-in-command, Mengele (Michael Sonye, a.k.a. Dukey Flyswatter; punk singer and ’80s exploitation flick regular).

Things don’t remain aces for that ghoulish gang for long as they soon take their mischief up a notch when they murder an oil worker named Leroy (Robert Harden)… which sets his mother Elanor (Gail Neely) on a revenge-filled rampage… after she escapes her nursing home!

Even if you have never seen Surf Nazis Must Die! I can guarantee that if you stepped foot in any half-way decent Mom and Pop video store in the late ’80s, you saw the box for this badass bitch starring out at you from those sinister shelves… and if you had any common sense (and a love for the delights only the finest of cinematic insanity can provide) you actually rented that motherfucker!

Director Peter George (who came up with the film’s story along with Jon Ayre who wrote the screenplay as well) creates a truly surreal universe here where smoky beaches are populated by aimless folks that make easy prey for the titular maniacs… and the fact that every line delivery is completely bonkers gives this even more of an off-kilter vibe, not to mention that it’s a film about fucking post-apocalyptic surfer gangs which is admittedly a tad weird as well… So yeah, it’s unique, that’s for damn sure!

A thing Surf Nazis Must Die! is not is politically correct (as the best of sleazy cinema should always be), and I bet the smarter of you lot guessed that just by reading the title, didn’t ya? But yeah, Nazi imagery is everywhere here, but those displaying it are definitely a bunch of no good bastards… and that may lead to a problem for some viewers, as besides the all too few sequences featuring Eleanor, most of our screen time is spent with these fiendish folks (though admittedly some are a trace more sympathetic than others, none of them are great guys and gals to put it mildly), but I’ll be damned if they aren’t an entertaining group of cartoon-level villains!

The only part of Surf Nazis Must Die! that I could do with less of is the surfing footage used to pad this puppy out. Look, I get that George digs on surfing, and probably had a blast filming it, but when it’s just there for no good reason, it should not be there at all… okay, it can be there, just less of it.

As for special features on this release we get the aforementioned new intro from Uncle Lloyd along with archival interviews with George and producer Robert Tinnell, a ton of random (and old as fuck) Troma nonsense (mostly) unrelated to the feature, an archival intro from Kaufman, and a collection of deleted scenes (with commentary from George).

Also present is a (nearly feature length) pseudo-audio commentary provided by an episode of The Projection Booth podcast reminiscing on the film from a fan’s perspective while providing details of the flick’s production.

I also have to mention that the picture on this release is pretty damn solid; it isn’t some laboriously rescanned and cleaned up 4k transfer, but it looks nice and clear, with good color… you know, everything the VHS version that some of us are familiar with didn’t posses, especially after hundreds of viewings.

Delightfully absurd, completely wrong, and undeniably enjoyable, Surf Nazis Must Die! is a must-see for those that like to take it sleazy!

← Prev: The Expedition Bigfoot Team Heads To Wondercon For The First Time Next: Blu-ray Review: The Long Night (2022) →