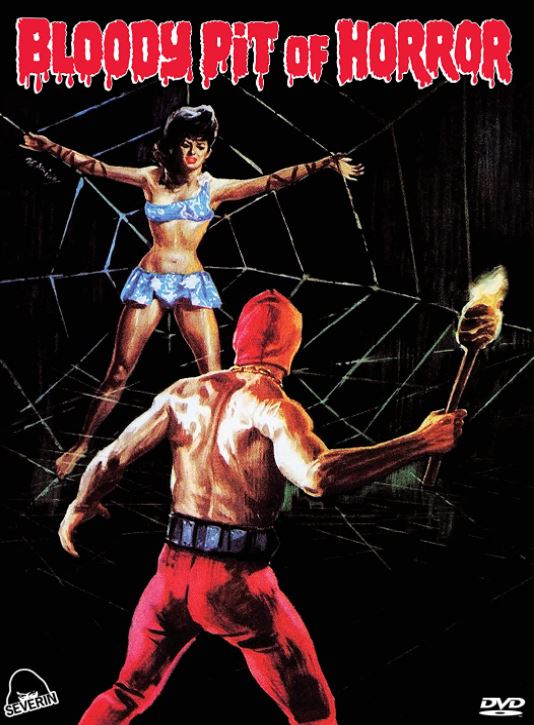 In ye olden times, muscle-bound, hooded, scarlet aficionado the Crimson Executioner is thrown in the iron maiden (so fuckin’ metal!) for operating a personal torture dungeon where he passed judgment on anyone that stuck in his crazy craw!

Flash forward to the fantastic modern year of 1965, where a gaggle of goofs arrive at a remote castle to shoot some hot pics for an upcoming horror photo-novel to be written by a dude named Rick (Walter Brandi). The only problem with that is, said dread domicile is inhabited by ex-actor/full-time psycho Travis Anderson (Mickey Hargitay), as well as his tight-pants wearing man-servant.

You know what else, Anderson believes he actually is the Crimson Executioner, so it’s really little fuckin’ surprise when the casts numbers begin to dwindle thanks to all manner of tricky traps!

Speaking of said “traps”, the reason Bloody Pit of Horror is so much damn fun is because of those exact set-pieces… well those and a bit more… but yeah, those traps are tops, with the stand-out being the woman, Kinojo (Moa Tahi) by name, who finds herself ensnarled in a large spider-web who’s strands are connected to bows which will send deadly arrows straight at the helpless victim… but just incase that doesn’t work, there’s a giant mechanical spider tipped with razor-sharp poisoned talons that slowly advances towards our heroine as well. It’s overkill to the max, and it’s sublime in it’s nonsense!

Causing all that murder and mayhem, body-builder/former Hercules (1960’s The Loves of Hercules to be precise) Hargitay (former husband of Jayne Mansfield, and father of Law & Order: S.V.U.‘s Mariska Hargitay) eats the scenery in a manner a story such as this demands… he’s all muscle, sweat, and supervillain soliloquies and he dances gleefully around the screen in a manner befitting an opponent of Adam West’s portrayal of Batman rather than the monstrous menace he’s intended to be, but fuck it, the performance is a delight!

Speaking of audio, the special features on this Blu-ray release from Severin include an uproarious and lively (not to mention info packed) with filmmaker David DeCoteau and film historian David Del Valle, along with an alternate opening sequence, and a trailer.

I can also safely tell you, the transfer Severin has used on this puppy (a 2K version culled from the original uncut negative recently discovered in a lab vault in Rome) is gorgeous, with vivid color and clarity (with some light grain here and there present)… but man, after the dog-squeeze versions of this I’ve seen before, this print looks like a brand-new film, and it’s good to see this lurid comic inspired classic get it’s visual due!

Just like the Italian fumetti (photo based comics often with horror themes) that inspired it’s creation, Bloody Pit of Horror is a kaleidoscope of demented amped-up villainy, torture, bright colors, and scads of light titillation and shouldn’t be missed!