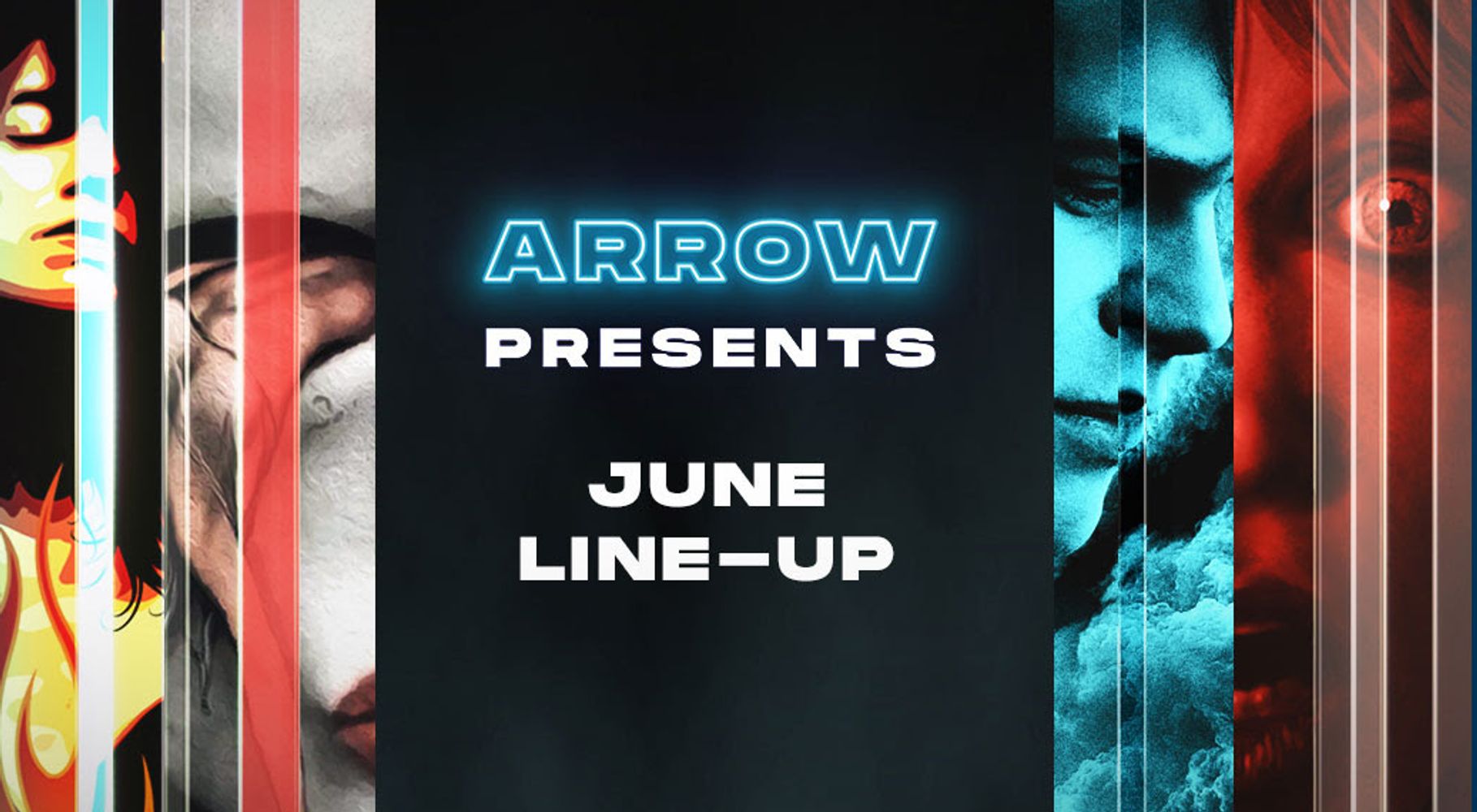 Arrow is turning up the heat this July with many new releases, and we’ve got the schedule, so you don’t miss anything. 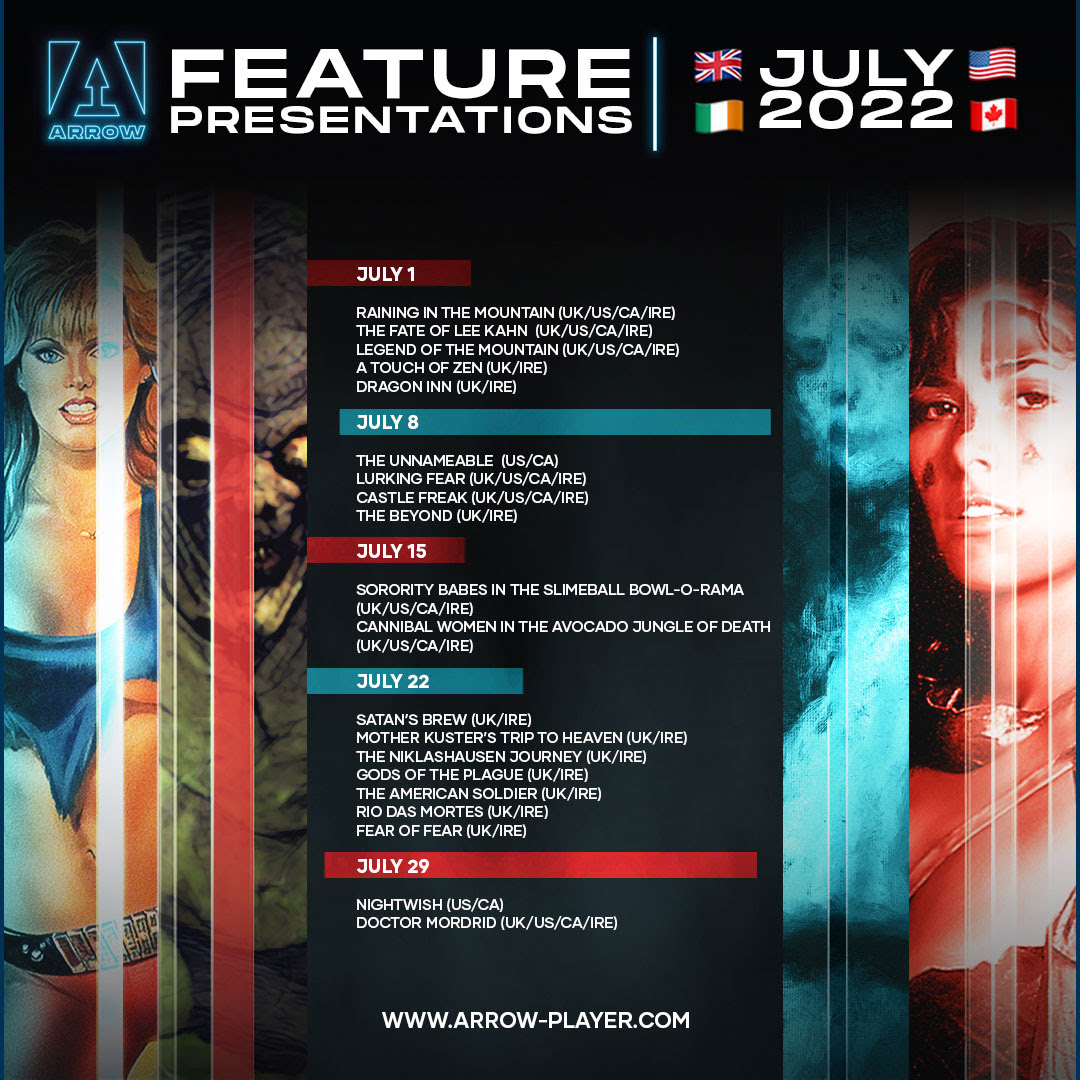 July 1 starts the month with The King Hu Collection, a quartet of films from the library of director/actor King Hu, available on ARROW in the US, UK, Canada, and Ireland.

Stories of honorable heroes battling the forces of evil with stunning swordplay and high-flying martial arts that laugh in the faces of physics and gravity, King Hu’s work in the 60s and 70s elevated the spectacular martial arts film genre to new technical and artistic heights.

On July 8, demons and monsters reign supreme, with a trio of titles pitting hapless humans against beasts out of a nightmare. Enjoy Castle Freak with Barbara Crampton and Jeffrey Combs (US/UK/CA/IRE), Lurking Fear (US/UK/CA/IRE), and The Unnameable (US/CA).

Also, on July 8, ARROW invites audiences to Lovecraftian (US/UK/CA/IRE), a season of films found scrawled on a post-it note in the back of a Necronomicon holding open a fire exit at the Miskatonic University. All within are based on or take inspiration from the Rhode Island writer who was christened “Howard Phillips” – but is known across the cosmos by genre lovers as “HP” Lovecraft.
If it’s gothic horror, fantasy, and science fiction stories that will fill you with cosmic dread and the sense that ordinary life is but a thin shell over reality so alien and abstract that merely contemplating it will damage your sanity, then you’ve come to the right place!

July 15 is ladies’ night, with a pair of beauties designed to thrill and terrify. Sorority Babes in the Slimeball Bowl-O-Rama (UK/US/CA/IRE): They are no freshmen in the college of love, and they’re about to graduate to madcap mayhem when a sorority prank goes crazy. Out to steal a trophy from a local bowling alley, the kids accidentally unleash The Imp – a sadistic little spirit with a wicked sense of humor. He creates demons and loves sexy women. He’s inviting you to come along and die laughing like everybody else.

Cannibal Women in the Avocado Jungle of Death (UK/US/CA/IRE): The U.S. government, eager to protect the nation’s avocado supplies, recruits feminist professor Margo Hunt to make contact with the Piranha Women, an all-female tribe who believe men are only good as a source of food.

On July 18, ARROW takes subscribers under the sea with Bodies of Water (UK/US/CA/IRE): a Season of aquatic horror that will give you second thoughts about escaping the summer heat by taking a dip.

Titles include the Island of Death, Lake of Dracula, Dark Water, and Blood Tide.

On July 28, pack your bags and head to Camp ARROW (UK/US/CA/IRE), a definitely-safe camping ground for Cult film fans that is 100% is not haunted or stalked by a wronged and possibly hideously deformed former camper or counselor, where nothing can go wrong. So pitch your tent or pick your bunk in one of our flimsy luxury cabins, kick off your gore-encrusted hiking boots, take a seat around the campfire, and hit play on one of our tales of youngsters getting into deadly trouble by bedding down somewhere they shouldn’t – this is most probably not foreshadowing of any kind.

Titles include: The Prey, The Hills Have Eyes, Girls Nite Out, and Trapped Alive.

July 28 closes the lineup with a pair of out-of-this-world films that will leave you shaken until August starts. Nightwish (US/CA): Using sensory deprivation techniques, a doctor of parapsychology provokes his students to examine their deaths in ever more horrifying circumstances. Roles are exchanged and shuffled as reality and fantasy become indistinguishable, and each new dreadful death proves more terrifying than the last. Their paranormal explorations lead them to an abandoned mansion in a desolate area that natives call the “Valley of Fear,” were years of drinking chemically tainted water have led to a genetically damaged population and mutant wildlife. Local legends also tell stranger stories of extraterrestrials that the students attempt to explore.
Doctor Mordrid (UK/US/CA/IRE): They are two beings from another dimension; two sorcerers with immeasurable powers. One has sworn to destroy the Earth; the other has vowed to protect it. Bound by hate and a mystical amulet that holds the forces of life and death, the immortal wizards will meet for the last time. Their battle takes on majestic proportions as Mordrid and Kabal begin their final conflict…to the end!

ARROW is available in the US, Canada, the UK, and Ireland on the following Apps/devices: Roku (all Roku sticks, boxes, devices, etc.), Apple TV & iOS devices, Samsung TVs, Android TV and mobile devices, Fire TV (all Amazon Fire TV Sticks, boxes, etc.), and on all web browsers at https://www.arrow-player.com.

ARROW Essentials curates collections based on genre, decades, and themes, and ARROW Stories takes a fresh look at the world of film and TV with exclusive documentaries, interviews, and video essays diving deeper into the many curated seasons and titles on the platform for a more prosperous and more profound viewing experience.

With a slickly designed and user-friendly interface and an unparalleled roster of quality content from westerns to giallo to Asian cinema, trailers, Midnight Movies, filmmaker picks, and much more, ARROW is the place to go for the very best in on-demand entertainment.

← Prev: Guests Get More Than They Bargained For In The 'Neon Lights' Trailer Next: Nick Chinlund & Danny Trejo Reunite In New Action-Packed Monster Movie →