Along with the release date announcement, we’ve got a new exclusive clip from the noir thriller Find Her, out this October from director Nick McCallum.

In the film, “When an ex-cop arrives in a small town searching for answers to a murdered ranch owner and his missing daughter, it slowly becomes clear he has his own personal agenda to finding the truth.”

Find Her, filmed in Louisiana and Florida, is both written and directed by actor/filmmaker Nick McCallum who also produces along with Stelio Savante, and Kelly Knox. G. Andrew Ahrens executive produces.

“Finding a good noir film is rare, and what is extremely rare, is finding one that delivers the intrigue, mystery, production esthetic and classic acting we’ve grown to expect, said Kyle Kaczmarek, CEO and managing director of KDMG, Inc. “This film delivers and is a perfect fit for KDMG’s family of titles. We are excited about its release and bringing it to audiences.”

Find Her will be available on most major streaming and cable platforms across the U.S. on October 1, 2022,  followed by its release on  DVD, from Kaczmarek Digital Media Group, Inc. 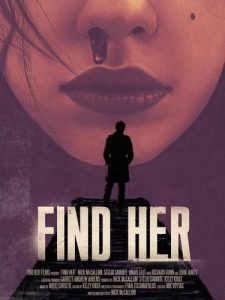