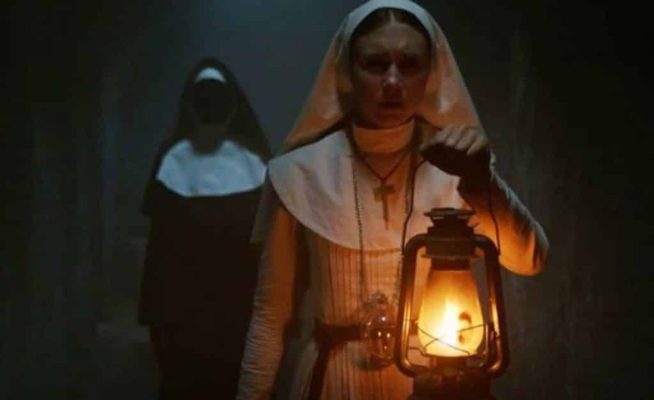 Since the moment The Conjuring franchise’s The Nun was released there has been rumors of a sequel. It’s no longer a rumor, but a fact. Warner Bros. has just announced a 2023 release date.

Michael Chaves (The Curse of La Llorona, The Conjuring: The Devil Made Me Do It) is set to direct with Bonnie Aarons returning as Valek. Taissa Farmiga is also returning to reprise her role as Sister Irene. Akela Cooper (Malignant) is writing The Nun 2.

The Nun 2 picks up four years after the original. “A priest is murdered. An evil is spreading. The sequel to the worldwide smash hit The Nun follows Sister Irene as she once again comes face to face with the demonic force Valek – the demon nun.”

The Nun 2 opens in theaters on September 8, 2023. We’ll update you when we know more. In the meantime, here’s a look back at the trailer for The Nun which followed a priest and a soon-to-be nun investigating the suicide of a nun at a remote convent. The movie connects back to The Conjuring 2 where the Warrens first come in contact with the evil entity.

← Prev: 'The Gravedigger', A New Twist On Frankenstein's Monster's Story, Is Out This Week Next: First Look: Exclusive New Clip From The Noir Thriller 'Find Her' →