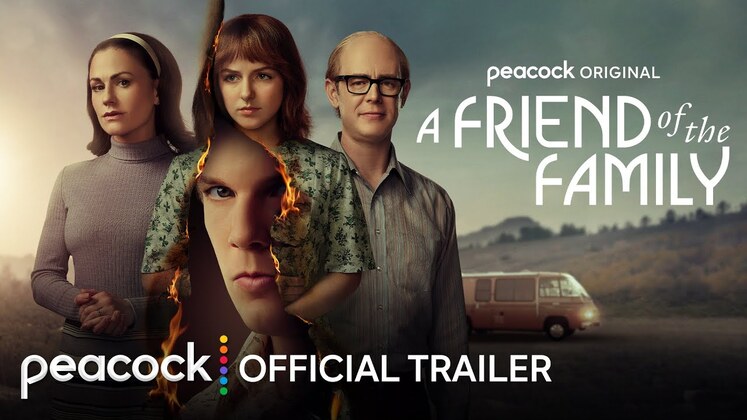 Back in 2019, viewers went through a gambit of emotions, mostly disgust and confusion, after watching the documentary Abducted in Plain Sight which explored the real-life story of Jan Broberg. Now, Broberg’s story has inspired the new limited Peacock series, “A Friend of the Family,” from showrunner, writer, and executive producer Nick Antosca (Brand New Cherry Flavor, The Act, Channel Zero)

The series will walk us through the shocking relationship between the Broberg family and the man who kidnapped Jan not once, but twice.

“It’s easy to judge the Broberg family’s story from the outside. Sometimes when people first hear it, they get defensive: ‘How could these parents have let this happen? I’m not like them,’ Nick Antosca said in a statement. “That’s understandable. It’s a surreal story. When I first heard it, I empathized with the family’s vulnerability, and I felt like I understood their story from the outside. But it stayed with me, and I wanted to understand from the inside—to know what their lives felt like, to live in each family member’s experience, to see how they were caught in such a bizarre web, and help audiences understand too.”

The first three episodes of “A Friend of the Family” premiered on Peacock last night, with one episode to be released each week for a total of nine twisted episodes.

It all began when the family met Robert at church in 1972. The family became fast friends with the man, not knowing that he was a pedophile.  He wove a spell on the family and began brainwashing them. In 1974 Robert kidnapped Jan for the first time, taking her to Mexico for five weeks. He was arrested in spent just 10 days in jail before being released. But the family brought him back into the fold.

When Jan was 14 he kidnapped her again, relocated, and even enrolled her in school as his own daughter. It wasn’t long before the FBI found them. Robert ended up in a mental hospital for just six months. How could any parents be so blind and gullible? That’s what people asked when the full story came out.

So where is Jan today? She’s doing well and is now an actress, author, and mother. She’s been in series such as “Criminal Minds,” “Colony,” and movies such as In Plain Sight, Maniac, The Devil’s Door, and Behind You. In all, she has a total of 53 film and series credits. She wrote about her life in the book The Jan Broberg Story: The True Crime Story of a Young Girl Abducted and Brainwashed by a Family Friend. Her mother, Mary Ann also wrote a book, one with a much shorter title, Stolen Innocence: The Jan Broberg Story.

In case you are wondering where Robert Berchtold is now, he died in 2005.

← Prev: Venezuela’s Official Oscar Submission, 'The Box,' Getting US Release Next: This October The Director Of 'The Descent' Is Back With 'The Lair' (Trailer) →