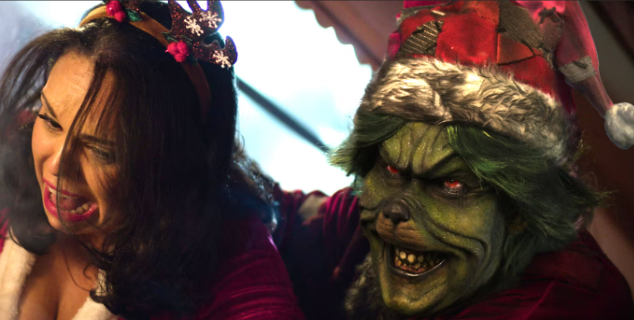 He’s a mean one, Mr. Grinch…the beloved character, created by Dr. Seuss, is getting a new take in the horror film The Mean One. This time the Grinch isn’t out to steal presents and Christmas trees, he’s out for blood.

The official synopsis goes like this: “The Mean One (David Howard Thornton) is a hairy, green-skinned grump in a Santa suit, living on a mountain high above the town of Newville, despising the holiday season. Young Cindy You-Know-Who (Krystle Martin), whose parents were butchered by The Mean One 20 Christmases earlier, is returning to town to seek closure… but is about to discover that this fiend with a heart two sizes too small is still quite eager to carve the roast beast.”

The Grinch is being played by none other than  David Howard Thorton, who plays Art the Clown in the Terrifier franchise. He is joined by Krystle Martin, Chase Mullins, Rachel Winfree, Amy Schumacher, Allyson Sereboff, and more.

Alex Williams, the manager of acquisitions at XYZ films released a personal statement about the film.

“As a passionate fan of seasonal horror (and the ‘Terrifier’ franchise), ‘The Mean One’ is exactly the kind of film that lands on my personal ‘nice list.’ This movie is a stunningly great time with a ferociously subversive turn from David Howard Thornton — and XYZ Films is so proud to be bringing this soon-to-be iconic Christmas slasher to audiences this holiday season.”

The Mean One is set to arrive just before Christmas, on December 15, 2022. Hoepfully, the trailer will be released soon. We’ll keep you posted.