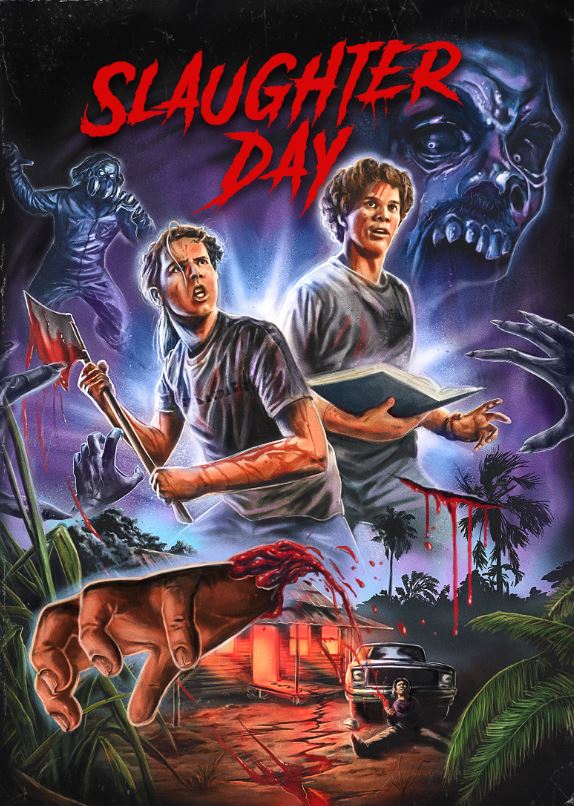 Two pals buy a lunch and bitch bout booze money as they head out for a hard day working construction at a remote cabin in Hawaii (didn’t see that one coming did ya?). Once on-site they witness one of their peers blasting geysers of blood from a wound inflicted from machete wielding psycho/amateur occultist John Jones (Sam Bluestone).

Our heroes don’t stand for this kind of maiming and proceed to beat Jones’ ass before escorting him by truck where the battle continues in the bed of a moving truck… and let me just stop this sinister synopsis to commend the absolutely absurd danger of filming this, and the result is at times nail-biting indeed!

Anyway, the chase continues until Jones huffs some sort of gas from a respirator mask and disappears into thin air which slightly rattles our heroes, but not as much as it would say, any normal-ass mother fucker that would bear witness to that David Copperfield shit.

Before long, Jones is sucked into the Necronomicon (but not any version you would expect, rather he is sucked into H.R. Geiger’s artbook The Necronomicon) before emerging as a pseudo-Deadite because Sam Raimi is awesome, and we all want to be him in the no-budget horror biz… well a lot of us do…

What follows is a wicked whirlwind of of fist fights, possessed construction workers, bullying, guitar noodling, and absolute mayhem performed by people with no credentials to be doing any of what is on screen… you know, just the way all of us cats n’ creeps dig!

This is definitely warts n’ all filmmaking with every damn seem showing (including constant calls of “Go” before action takes place, and other mistakes being left right the fuck in) but it is entertaining as hell… and why wouldn’t it be?

Slaughter Day is jam-packed with copious (and impressive) no budget gore-packed special effects, jangly guitar rock, stunt work that easily could have gotten someone severely injured…. but most importantly you can tell the filmmakers and cast were absolutely giving this material their absolute all, and heart is the most important part of D.Y.I. horror if you ask your’s cruelly.

Speaking of “heart” the film’s creators, brothers Blake and Brent Cousins were definitely committed to this universe as the special features present on this Blu-ray release from Visual Vengeance well-prove!

The Cousins brothers kick off the special features with an audio commentary that takes us through the creation of the film in fascinating detail including the innovative way they achieved their dynamic camera angles, the danger in their stunt-work (no fucking kidding), and what life was like in Hawaii at the time.

Following that comes a second audio commentary featuring Matt Desiderio and Rob Hauschild of Visual Vengeance in an upbeat conversation focusing on the film from a fan’s perspective, a small selection of alternate takes, and a new interview with the Cousin’s brothers.

Best of all are the collection of short films included by the Cousins brothers which include the backyard, child-starring ‘Nam epic Full Metal Platoon, as well as three Slaughter Day shorts that pre-date the feature… and in my opinion may be even better than the main event as shit gets even more out of hand and the effects actually are more ambitious while being more primitive… it’s mind-bending and deliriously entertaining at the same time… plus it’s filled with indoor fireworks, a rockin’, if familiar, soundtrack, fun creature design, and a ton of that good ol’ absurd nonsense that’s all the rage with Tiny Tim impersonators between the ages of 23 and 47, oh and me… okay mostly me, possibly only me…

Where in the fuck were we? Oh yeah, special features… there are more of them including that absolute fucking banger of a theme song, as well as a collection of trailers, both for this film as well as upcoming Visual Vengeance releases.

Also included are a slipcover and reversible sleeve (all with different artwork), a mini-poster, a sheet of retro ’80s video store stickers and liner notes courtesy of author Tony Strauss.

Lightning paced, full of glorious splatter, and supremely entertaining, Slaughter Day is a true diamond in the creepy crown of S.O.V. horror and should not be missed!

← Prev: Box Set Review: The Incredibly Strange Films of Ray Dennis Steckler (1962 - 1986) Next: This December The Grinch Is Out For Blood In 'The Mean One' →