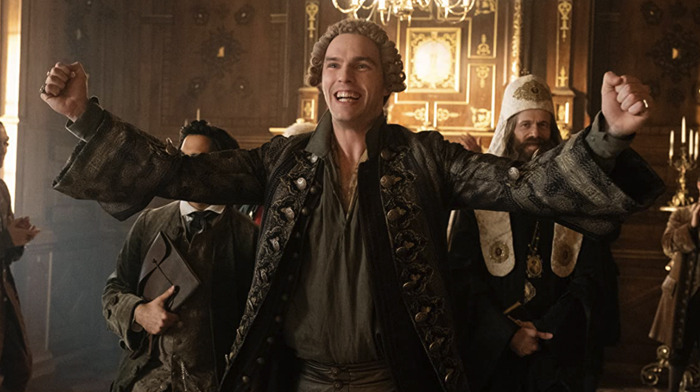 This April, you can sink your fangs into Universal’s upcoming Dracula-inspired movie Renfield, starring Nicholas Hoult (“The Great,” Mad Max: Fury Road, Warm Bodies) as Renfield and the one and only Nicolas Cage (Ghost Rider, The Unbearable Weight of Massive Talent) as the infamous vampire Count Dracula.

During a recent talk with THR, Hoult teases the film’s take on Dracula, describing it as an “action-comedy.”

“I’m excited for people to see what he’s done,” Hoult tells the outlet. “It’s original, but it’s steeped in a lot of history, Dracula history and folklore. So it’s exciting, even though it’s a very bizarre, elevated tone for an action-comedy. So I’m excited for it.”

“I don’t think there’s two more iconic things than Dracula and Nic Cage,” Hoult also tells THR. “So, to put those together and be in scenes with him and just watch all the inspiration and all the things that he brings to the character, the fun of it, the dedication, his love for acting, I just loved every single moment. As a person, he’s such a pure soul to be around.”

Nicolas Cage recently described his portrait of Count Dracula, saying that the character’s movements are inspired by horror films like Ringu and even James Wan’s Malignant. Needless to say, I think it’s safe to say that we’re in for a wild ride.

Renfield is based on an original story by “The Walking Dead” creator Robert Kirkman and was written by “Rick and Morty’s” Ryan Ridley. Chris McKay (The Tomorrow War) is in the director’s chair for the movie.

“The film centers on Renfield (Hoult), who has grown sick and tired of his centuries as Dracula’s (Cage) lackey. The henchman finds a new lease on life and maybe even redemption when he falls for a feisty, perennially angry traffic cop, Rebecca Quincy (Awkwafina).”

Renfield comes to theaters on April 14, 2023. Check out the first on-the-set images of Cage in costume here.

← Prev: Sink Your Teeth Into The New Clip From 'Bones And All" From The Director Of Suspiria Next: Hemsworth Replaces Cavill: First Look At The New "Witcher" →