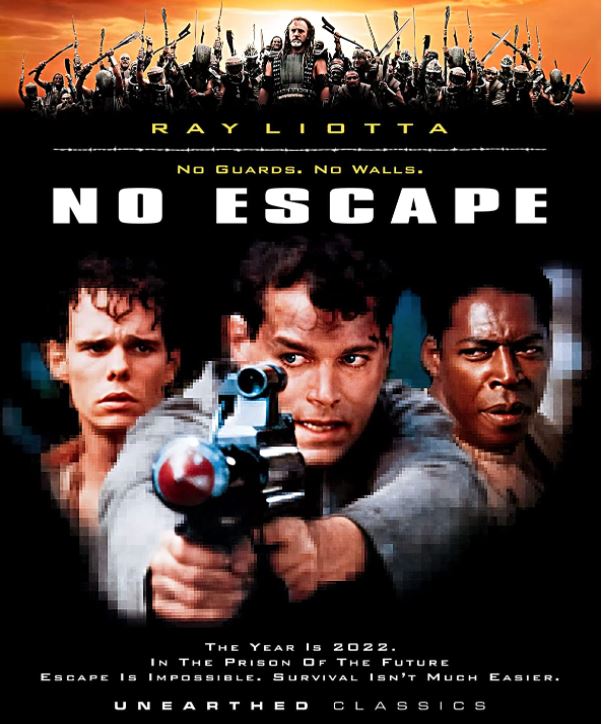 In the fantastic future year of 2022, big biz owns the world’s prisons and they love nothing more than exiling problem prisoners to a remote island known as Absolom, a piece of land populated entirely by convicts, cannibals and other assorted wacky-ass chaps!

This is something Marine John Robbins (Ray Liotta) learns about intimately as his ass is thrown there almost immediately after being incarcerated for the murder of the commanding officer who demanded our hero murder innocent civilians.

Before long, Robbins finds himself caught between the neo-primitive Outsiders who rule the jungle with violence from a base located in an abandoned resort, and the Insiders, a group of more peaceful folk who form a small tribe that try to keep to themselves far removed from the Outsider’s jungle… though not so far that the gang’s leader, the absolutely off-the-wall Walter Marek (Stuart Wilson), doesn’t launch frequent pillaging sessions, much to the chagrin of the Insider’s leader, Father (the legendary Lance Henriksen).

Guess what? Our man John really wants nothing to do with either of them for the most part, he just wants to be off the damn island at any cost, though relationships are formed so you know that’ll complicate shit…

I admit, I saw No Escape once, in the theater (and read the DC Comics adaptation), and totally forgot about it for decades, and I’m kind of glad I did… because rediscovering this action-packed gem has been a complete blast!

Directed by Martin Campbell (who would go on to direct James Bond flicks Goldeneye (1995) and Casino Royale (2006) to name but a few… but you lascivious lot should know his name from his 1990 HBO flick Cast a Deadly Spell, an irresistible blend of L.A. based Noir and H.P. Lovecraft that absolutely should not be missed) and written by Michael Gaylin and Joel Gross (based on the novel The Penal Colony by Richard Herley), No Escape is filled with explosions, a few blasts of gore, and a surprising amount of heart… and that last bit sets it apart from most of the sci-fi-seasoned punch-your-balls-off blockbusters that were very much the rage at the time…

A lot of this is the result of some great performances from not only Liotta who remains the grim anti-hero throughout, but does have many layers as to why he “is as he is” so to speak… and those layers really begin to appear as he inadvertently takes the most innocent man on the island, Casey (a youthful Johnny Drama himself, Kevin Dillon… but most of our crowd will recognize him from Chuck Russell’s superlative 1988 remake of 1958’s The Blob), a young dude who was basically an accessory to a botched kidnapping, under his wing forming an off-beat father/son duo that presents us with much of the film’s emotional content, though much of the Insider’s have rather complicated reasons as to why they are there.

While we are speaking of acting, we also get some solid performances from the aforementioned Henriksen (naturally), Ernie Hudson (Ghostbusters franchise, The Crow, and the vastly underrated Spacehunter: Adventures in the Forbidden Zone), and Kevin J. O’Connor (whom you may remember from most of Stephen Sommers oeuvre including good ol’ meme-tastic Mummy)… but there’s an unsung hero hiding in this cast my cats n’ creeps…

I’m going to go right ahead and say it, Stuart Wilson (Hot Fuzz, Teenage Mutant Ninja Turtles III) absolutely owns this film.  his portrayal of Marek is a wicked whirlwind of smart-assery, over-the-top craziness, and super villain posturing that is as wildly entertaining as it is hilarious!

Speaking of “entertaining”, Unearthed films have included a great selection of bonus material to enhance your viewing of this punchy picture including: interviews with producer Gale Anne Hurd (Terminator, Aliens, and many more), Campbell, and co-writer Joel Gross, an alternate opening sequence (featuring the film’s alternate title Escape from Absolom, a retrospective “making of”, an archival featurette, and a promotional gallery.

Though it has been somewhat forgotten, No Escape is ready for rediscovery; it’s action-packed, funny, has an absolutely top-shelf cast, and shouldn’t be missed, especially with the extras Unearthed has included here!