You would think that a film giving away its body count in its title and told by way of nonlinear fashion in which the fate of its characters are shown early on would be lacking in suspense, but 8 Found Dead defies the odds. Director Travis Greene, working from a screenplay by Jonathan Buchanan, wrings tension from an initially awkward situation that escalates to chilling, thanks in large part to characters that create highly uncomfortable edginess throughout.

Four twenty-something friends with uncomfortable ties in both the present and the past plan a weekend retreat so that social influencer Sam (Alisha Soper) can make a big announcement to her boyfriend Dwayne (William Gabriel Grier) and couple Carrie (Aly Trasher) and Ricky (Eddy Acosta). The group books a short-term rental house only to find, as they arrive in separate pairs, that older couple Richard (Tim Simek) and Liz (Roseanna Limeres) are already ensconced and have no plans to leave.

As the younger couples and Richard and Liz try to figure out what to do, with no one giving an inch about giving up their reservations, matters go from unpleasant — as the older couple spout politically incorrect opinions and make sexual advances — to deadly.

8 Found Dead starts off seeming like it might be a horror comedy, but the film soon turns much more serious — though viewers will find plenty of dark humor throughout. The nonlinear, parallel style of unveiling its proceedings may take the mystery out of whodunit, but Greene and Buchanan make it clear from the beginning that whodunit was never the point.

The ensemble cast — which includes  Laura Buckles as Blake and Patrick Joseph Rieger as Bobby, a pair of cops on the verge of divorce — is superb, with all of the actors nailing their characters marvelously. Simek and Limeres dole out the creeps immediately, while the other actors portray the personal dramas of their characters in an engaging manner.

Horror films about short-term rental properties are becoming a proper subgenre with such entries as Exit, Superhost, and Barbarian. Greene’s 8 Found Dead is a solid, highly entertaining entry into that group. 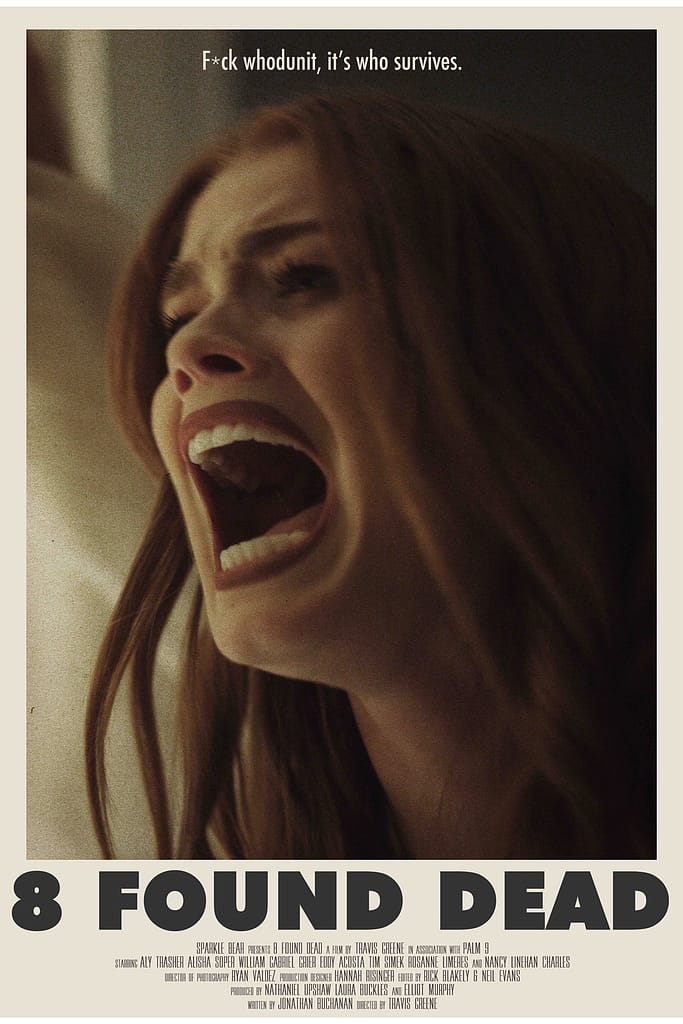 ← Prev: New Scare-Filled Trailer Arrives For 'Bed Rest' - From The Producers Of Scream Next: Shorts Reviews: RINGWORMS, SHADOWBAN, and FAMILIAR (Another Hole in the Head Film Festival) →