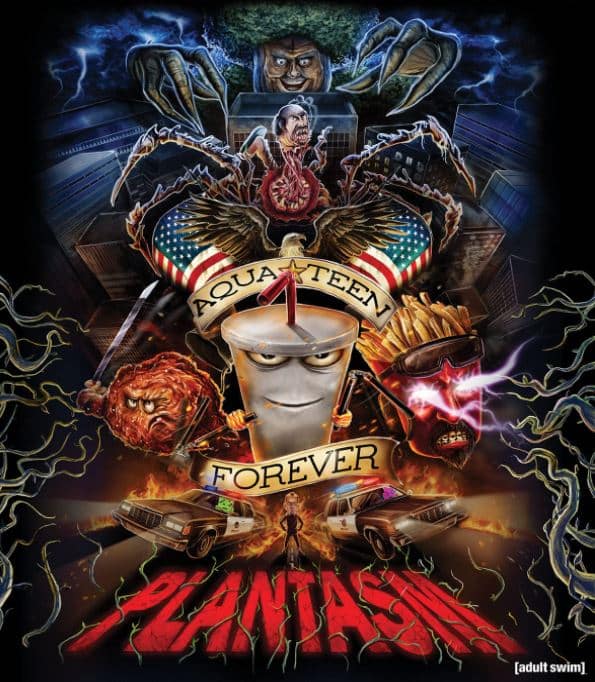 Warner Bros. Home Entertainment provided me with a free copy of the DVD I reviewed in this blog post. The opinions I share are my own.

Running from 2000 to 2015, Adult Swim’s Aqua Teen Hunger Force concerned the adventures of three fast food items, none of whom are teens, that gather together to solve crimes which they never do.

Aqua Teen Forever: Plantasm is a direct-to-video film sequel to all that.

On the job Frylock works with a scientist named Elmer (Paul Walter Hauser) who is working on both a machine to stretch Neil out, and intelligent plants, and neither are going well.

Before you know it, Frylock and Neil get chummy after the former suggests using DNA splicing to solve Neil’s shortcomings… but that just results in Big Neil and before long the Neils and Elmer fix the troubles with those pesky plants  and immediately begin shipping seeds out in the form of Amazin boxes that grow into violent green killing machines… killers that do their best to kill the now homeless Shake, Meatwad, and their long suffering neighbor Carl (Willis as well).

Will the gang get back together in time to actually get of their collective asses and actually save the world?

Let me just say this up front; if you loved the series, you are going to love this…

With series creators Matt Maiellaro and Willis returning to write and direct, and the original voice cast involved, that should come as no surprise… and thankfully the characters have aged well, with the expected surreal humor retained perfectly which makes the entire affair seem like an extended episode of the original show itself… mostly.

With a feature length run-time and an actual structured plot (unlike the stream of consciousness first feature starring these freaky foods; 2007’s Aqua Teen Hunger Force Colon Movie Film for Theaters) on their hands,  Maiellaro and Willis stumble a bit in the narrative’s pacing, and the usual bizarre comedy sometimes takes a back to seat to more conventional jokes that seem shoehorned in to appeal to the broadest common denominator… which this series has seemed to never give a singular fuck about before this point…

That being said, the animation here, provided this go-around by Bento Box Entertainment is a step-up from the series as well as the first film, and it’s nice seeing these characters get that kind of attention, but some may feel a bit of the charm of the series was it’s somewhat crude animation.

As for special features, Disc One (the 4K UHD version if you’re keeping score at home) contains an audio commentary from cast and crew that detail the film’s production in a lively manor.

Disc Two is a Blu-ray version of the film containing the aforementioned commentary along with a brief doc on the film’s creation, a collection of deleted scenes, an early animatic version of the film with text-bot accompaniment,  and a slow motion recreation of the end credits of Buckaroo Banzai of all things…

Bottom line; if you loved the series you will dig on Aqua Teen Forever: Plantasm; while it’s a tad more mainstream… and barely a tad at that… it’s nevertheless business as unusual!

← Prev: Season Two Of "Wednesday" Announced With Two New Clips Next: M3GAN Scores The Title "Certified Fresh" On Its First Day In Theaters →