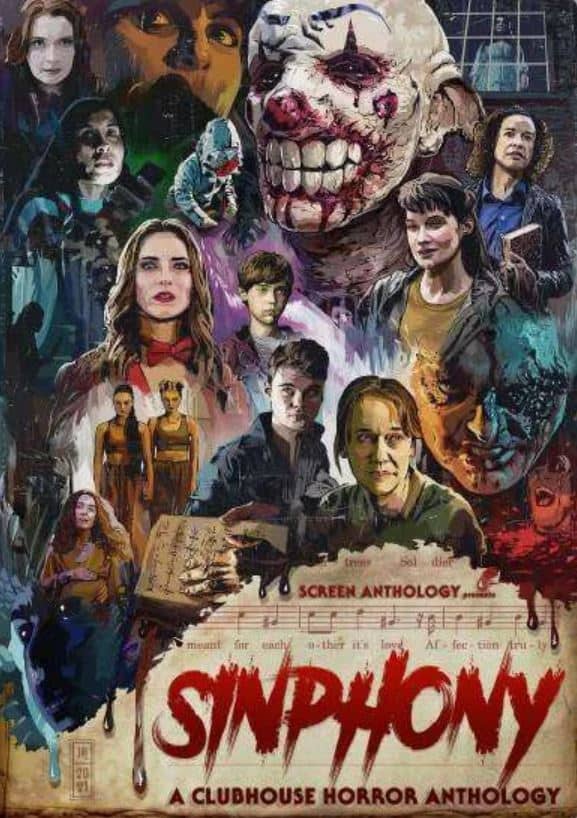 Sinphony is a new entry in the ever popular genre of horror anthologies; so let’s set our putrid peepers on each tale for a brief sinister synopsis:

Things kick off  with a wrap-around segment, Sebastien Bazile and Michael Galvanwith’s Symphony of Horror which details a woman delivering a demon baby and were off to the races my cats n’ creeps!

Following that we get Jason Ragosta’s Mother Love; an effective stalk n’ slay number with a woman and her young son being accosted by a creepy clown… but there may be more to the situation than first appears!

Next is  Steven Keller’s Ear Worm; a putrid parable about a father and son mold abatement crew coming up a rather nasty new strain.

After that comes Haley Bishop contributes Forever Young which concerns a woman’s attempts to beat the perceived ravages of Father Time via a social media app with expected unexpected results!

As a breather we get to see the grizzly goings-on of a kid who’s toddler years are a true terror in Wes Driver and Greg Greene’s The Keeper.

Next we get Mark A. Pritchard’s Limited Edition in which a woman attempts to recapture past events with murderously magical results!

Following that lil’ noxious number we get Kimberley Elizabeth’s Do Us Part? which concerns the misadventures of a married couple gone oh so wrong!

Jason Williams’ Tabitha comes next, and lays out the story of a lady who fucked up a robbery but good and is now facing a preternatural presence in the cramped confines of her car!

The last of the stories proper is Nicole Carson’s Maternally Damned which details pregnancy gone to hell and a handbasket… and the cravings are just murder!

After that the wrap-around ends and the credits roll!

Sinphony is listed as “A Clubhouse Horror Anthology”(which countless seconds of searching online revealed was an audio only social media app), so if you like whatever the hell that is you’re probably already sold on this thing, but if you are like me (read: completely clueless) I can tell you that this is worth a wicked whirl whether you know what the fuck the Clubhouse is or not!

Every segment presented here is pretty damn solid (my favorites being Forever Young with it’s willingness to get weird as fuck, Mother Love with it’s fun twist on the slasher genre, and Tabitha with it’s effective use of a claustrophobic locale) and feature strong casts, excellent usage of limited resources, and some great scares… and each is well worth your time if you love brief jaunts into the dark-side!

As for special features on this DVD from Dark Sky Films, we get a poster gallery, an additional segment, and the film’s trailer.

At the end of the day, if you love arcane anthologies, Sinphony will definitely be your cup of terror tea!

← Prev: M3GAN Scores The Title "Certified Fresh" On Its First Day In Theaters Next: A Fight To Survive A Blood-Thirsty Cult Unfolds In 'Night Of The Bastard' (Trailer) →