The epic conclusion to the Primetime Emmy®-winning TV series, “The Walking Dead,” comes to Blu-ray, DVD, and Digital from Lionsgate this March.

What Forbes calls “the most in-demand show in the world,” “The Walking Dead” Season 11 features Norman Reedus (The Boondock Saints franchise, Triple 9, Blade II) and Melissa McBride (The Reconstruction of William Zero, TV’s “Dawson’sCreek”) on a risky mission. At the same time, the rest of the group contacts the Commonwealth, a seemingly civilized community with a dark secret lurking just beneath the surface.

“In the epic final season of “The Walking Dead,” Daryl and Maggie embark on a risky mission with Negan to root out the shadowy Reapers. At the same time, Eugene and Ezekiel make contact with the sprawling Commonwealth. To secure aid for Alexandria–their goal–they must assimilate…a tough ask for people who’ve seen no end of deceit, betrayal, and loss. Stunned by the Commonwealth’s resources, the group slowly adjusts to their new home, but they can’t ignore what lurks beneath its seemingly civilized surface. Soon, threats abound, loyalties are tested, and shocking fates await. But the fight for the future, threatened by an ever-growing population of walkers, means the walking dead will live on…” 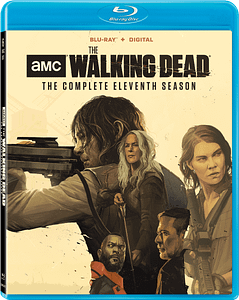 ← Prev: First Image From Horror-Western 'Ghost Town' Puts The Dead On Display Next: This February 'Viking Wolf' Bares Its Teeth On Netflix →