Based on the iconic cult movie franchise, the all-new revenge thriller television series Wolf Creek: Season One arrives on DVD March 21 from Lionsgate.  The Season is currently available on Digital DV.  John Jarratt reprises his role as the murdering psychopath of the Australian Outback, Mick Taylor.  One of the most exciting new shows on cable network Pop, the series also stars Lucy Fry as an American college student who hunts down Mick Taylor to avenge the murder of her family.

The series tagline “It’s not justice she wants…it’s revenge” promises a very exciting ride through this series.  And will stay true to the original with the guidance of creator Greg McLean back in the writing/producing/directing seat.

The dvd set also boasts tons of special features and including featurettes, interviews, and looks behind the scenes.

Check out Wolf Creek: the TV Mini Series right away on Digital DV or on DVD March 21.

← Prev: Devour The Two New Clips From The French Cannibal Film 'Raw' Next: Check Out This Crazy New Clip From The Series 'Snatchers' → 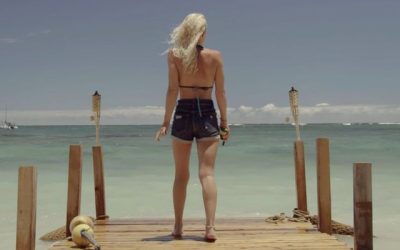 This August, dive into Saban Films’ shark thriller Maneater, from writer-director Justin Lee, which follows a group of...