In the 18th century, England set its sights on colonizing India. India was prosperous in its own ways and would enter the modern age on its own time but England viewed it differently that they were backwater savages that needed to be forced into the present and to grovel thankfully for it. Obviously, this did not sit well with many of the country’s inhabitants leading to deep seeded resentment at the time (and still felt today somewhat). Nothing illustrates this more than the hand-cranked automaton known as Tipu’s Tiger.
The machine depicts a tiger on top of a British soldier biting his neck as the soldier lies with a look of horror on his face. That’s not the end of it, the soldier moves; well his arm does in a flailing motion making the hand uncover the mouth where a metal pipe is and allows air to come out making a dull wailing sound as if the man is screaming. Not only does the man “scream” but the tiger makes a growling noise as well. This only works as someone crank the handle causing a suction that pulls air into bellows-like air bladders that fill and empty as the internal mechanisms work. The side of the tiger can be opened revealing organ pipes and a set of buttons acting at a keyboard, yes, the tiger is also an organ. 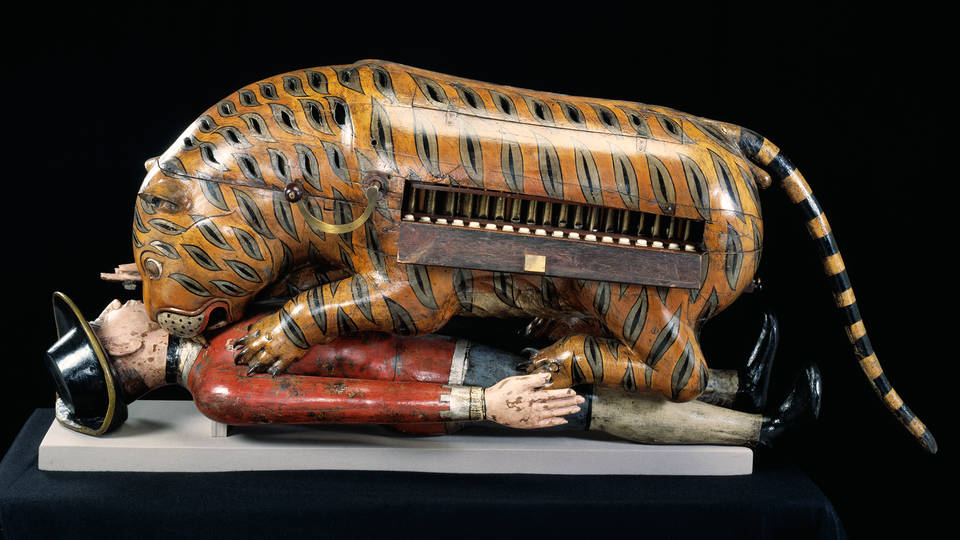 Side view of the organ and keyboards. vam.ac.uk

Legend says that Tipu Sultan, ordered the creation of this organ and others like it that depicts a British soldier being trampled by an elephant, and a British soldier being beheaded. The tiger organ is the only known Tipu automaton to be in existence after it was recovered from his summer palace after it was raided by British troops after the Siege of Seringapatam 1799 and brought back to England as a trophy of war; Tipu Sultan was killed in battle. Legend also says that the man being attacked by the tiger was 17-year-old Hector Sutherland Munro who was a cadet in the fame East India Company, son of General Sir Hector Munro. 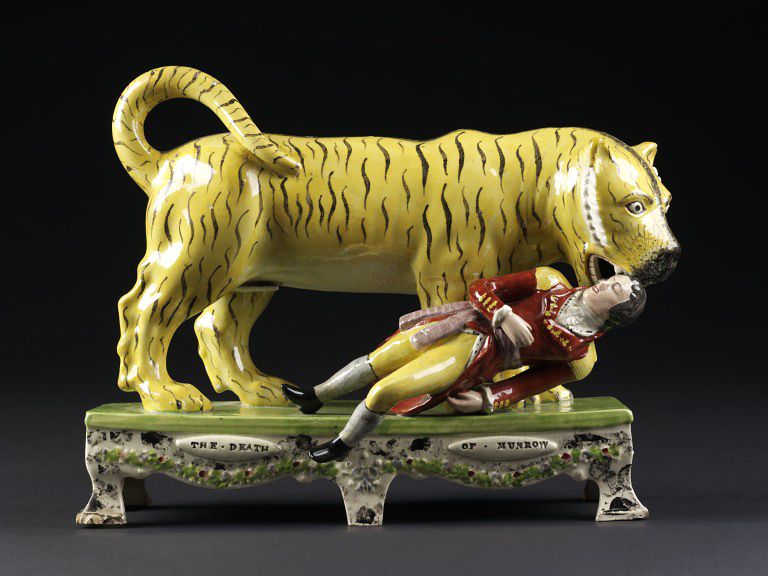 Young Munro was killed by a Bengal tiger in December 1792 while hunting. Tipu’s Tiger is often referred as The Death of Munrow, possibly mistaking it for a ceramic statuette that depicted a young man who was said to be picnicking before being mauled to death. This theory that the soldier being attacked was the General’s son was later disproved as a mount made of silver for a gun that was made for Tipu in 1787 showed the same scene. The tiger automaton was not just an image to entertain Tipu Sultan, it was a political statement. Tipu was associated with tigers, he was a leader as well as a soldier, and the most feared animal in India is tigers. So it only would be fitting showing the symbolic representation of a leader killing his enemy, the automaton was a propaganda tool. The automaton is on display in the Victoria and Albert Museum (A&E for short) in London.
You can hear the organ here, honestly, I thought he should have played “Eye of the Tiger”!