Human Hibachi: Mario Cerrito III Talks About His New Film In An Interview

Writer-director Mario Cerrito III has a new upcoming horror film, Human Hibachi, and he sat down to talk with us, giving our readers a little taste of what they can expect. 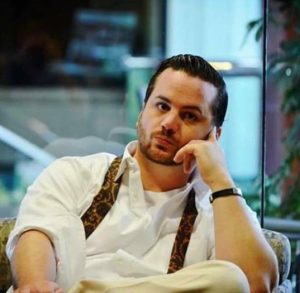 Horror Fuel: “We shared the first batch of images from Human Hibachi when they were released. They seem to be teasing cannibalistic aspect of the film.”

Horror Fuel: “How did the story come to be?”

Mario Cerrito III: “I was at a hibachi restaurant with my wife and brother-in-law and we were drinking and one of them said ‘Wouldn’t it be crazy if it was human meat?’ You hear stories about how some eat cats and all and that myth? Well, we wondered if a place was shady and late at night opened up for people who came to eat it, like rich cannibals and paid good money for the restaurant to cook them human meat after hours.  That’s where the idea came from. I know cannibalism has a bit of a cult following in the genre. I took elements from my favorite movie, Hostel, and made it original.”

Horror Fuel: “Here’s an interesting question, if you were stranded on a mountaintop with a few friends. Could you commit cannibalism to survive?”

Mario Cerrito III: “Yes, absolutely. I think I could because I believe that it is something that would just kick in. I believe fighting to survive is something that just comes down to us at our core. I feel like it would be instinctive, which is crazy to think about.”

Horror Fuel: “I agree with you. I think if it was eaten or die, I would do it.
Tell us more about Human Hibachi?”

Mario Cerrito III: “It has a lot of dark humor in it and intense situations.”

Horror Fuel: “I’m not sure if you heard, but something similar to your film happened in real life in India not long ago. They shut a restaurant down for serving human meat.”

Mario Cerrito III: “I read about that. It’s crazy that that stuff happens.”

Mario Cerrito III: “Ewww. I’ll stick to Italian.
The film is going to be considered horror with everything I’ve put in it. It’s gross. I do have one more scene to do. I wrapped principal photography about a month ago and then my mind started going again so I’m adding a scene. There may end up being a Human Hibachi 2. We’ll see.”

Horror Fuel: “Do you have a release date yet?”

Mario Cerrito III: “I’m looking to a screening for cast and crew in or around May, but then I’m going to submit it to festivals. I’m thinking mid-2019 it will start hitting festivals. We’ll be doing some horror conventions as well.”

Horror Fuel: “If you had to describe Human Hibachi in three words what would they be?”

Mario Cerrito III: “Creepy, for sure, grotesque, and I would say mysteriously.”

Horror Fuel: “What made you want to be a filmmaker?”

Mario Cerrito III: “I’ve always been a storyteller. Nothing really made me want to get into it, it kind of just happened. I wrote a horror script in 2007 but had no idea what to do with it. My now wife found it in 2011 and read it and told me I needed to get it made. I had no idea how to get it made. I started reaching out to people on Facebook and one thing led to another. I shadowed a producer but we had a falling out. I learned so much from him though. I then wrote ‘Deadly Gamble’ in 2013 and it was released worldwide. That’s kind of how it all happened. It’s weird. I love entertaining and I love how dreams can go from your head to the screen. I’m also thinking about going more into writing, but to be a writer you almost have to have some credit behind you. If this movie gets signed it will be my third to get a distribution deal and I’ll have some credit behind me.”

Horror Fuel: “The world could use more horror writers.”

Mario Cerrito III: “I won’t do something that’s been done a hundred times. There’s no point. If someone has already done it doesn’t get my creative juices flowing. When I do something it has to be original.”

Horror Fuel: “It’s nice to hear a writer/filmmaker say that. We’re all so sick of remakes and reboots.”

Be sure to follow Mario Cerrito III and Human Hibachi on Facebook, Twitter, and Instagram for updates, behind the scene, looks, and more. As soon as a release date is announced we will let you know. In the meantime, check out his previous films The Listing, Philly Offensive, and Deadly Gamble.