Writer-director Taylor Chien’s new horror film The Resort is headed your way this April. I sat down with actor, model, and genuinely nice guy, Brock O’Hurn to talk about his role as Chris in this paranormal horror that follows four friends as they head to Hawaii to investigate reports of a haunting at an abandoned resort in hopes of finding the infamous Half-Faced Girl. When they arrive, they soon learn you should be careful what you wish for.

O’Hurn, who has long been a model and actor discusses everything from The Resort, his past, and upcoming roles, his passion for acting, and staying fit in our interview. Check it out.

HorrorFuel: “I watched The Resort last night. I really enjoyed it and the effects are great. Let’s not forget about the scenery. The location is stunning. Can you tell us about it?”

Brock O’Hurn: “Yeah, I mean it was incredible. The location was actually an abandoned resort in Maui. We heard it was really haunted, according to locals. We were told we should have gotten a shaman to bless the land. It was a little creepy, a little eerie. People had a lot of stories about what had happened there, but at the end of the day, we got to look out and see the beautiful ocean and we were in the middle of this incredible place. I couldn’t have complained if I tried.”

Brock O’Hurn: “Taylor Chien has such a great eye for locations. It was breathtaking, I kept thinking, ‘I can’t believe I’m at work right now.’

HorrorFuel: “I imagine. Did you experience anything strange or paranormal while on location?”

Brock O’Hurn: “I didn’t see anything, but I definitely heard a lot of stories from the crew and things they had seen there during weird hours when they were by themselves. I even saw a picture of this dark figure that someone took. Someone told me they saw a figure that looked like he was dragging a rope or something. You add that stuff up and you get these feelings that somethings around you, regardless if you see it or not, it will get to you.”

HorrorFuel: “That had to be spooky.”

HorrorFuel: “I’m trying not to give anything away but, there’s a certain scene where you have some trauma, how did they accomplish that?”

Broch O’Hurn: “I know exactly what you are talking about. I spent a lot of time in the hospital after that [laughter].”

Brock O’Hurn: “No, but that was one of the cool things about the movie is that there is a lot of practical effects. Most of the stuff you see is practical. There was blood splattering all over the place. I feel like it is pretty cool, right? When I saw it, I was like, ‘Wow! [whistles]’.

HorrorFuel: “I’m a huge fan of practical effects. There were a lot of great moments, like that scene where Michael Vlamis’ head gets peeled like an orange. It actually caused me to go,’ Whoow.’ And that’s rare these days.”

Broch O’Hurn: “The conception, the idea of it, the execution of it was great. To see it happening in front of your own eyes, it was one of those – like we knew we’ve got this. It was great. It was very exciting to be on set.”

HorrorFuel: “Oh, I’m sure it was. What was the biggest challenge while filming?”

Brock O’Hurn: “The biggest challenge was our time constraints. The place we were filming was a beautiful, but remote location. We got to create a film in a location that no longer exists. We were the last ones to film there before it was demolished.”

HorrorFuel: “I have to ask, are you a big believer in the paranormal/supernatural?”

Broch O’Hurn: “I am. I’m not going to beat around the bush on that one [laughter]. I’ve seen some things myself and there are so many stories, so many things in this world that we can’t explain. Not to get preachy or spiritual, but I don’t think this life is our only existence. Regardless of if it’s good or bad, I do think there are spirits or something out there. Now that I’ve made a film in this genre and with all the things I’ve seen, I really do think it does bring things more to light. What if? What if there really is a half-faced girl. There is that possibility in the back of my mind. Take something like that and it makes this film that much more fun and exciting, and maybe scary.”

HorrorFuel: “I get it. I’m a believer myself. You being a believer had to help in your role, you told me how creepy the location was.”

Broch O’Hurn: “As long as they [ghosts] stay the heck away from me, we’re good.”

HorrorFuel: “Speaking of roles, you were also in another sort of horror franchise, Tyler Perry’s Boo movies.”

HorrorFuel: “I saw those when they came out. I love Madea!”

Brock O’Hurn: “Oh, you did? Thank you. We had a lot of fun with those. The first one was my first role. Working with Tyler Perry was the first time I really acted in anything. I am so grateful for having that opportunity. Acting is exactly what I want to do. I learned so much from that man and everything that he does. We filmed the first movie I think in five days. And it came out great.”

HorrorFuel: “Five days is quick. I have almost every movie and play he’s ever made, and the book.
By the way, you nailed your frat boy role. “Horse” is funny.”

Broch O’Hurn: “Yeah? We had a bunch of fun. I made a couple of friends from that movie. It was like we really were a bunch of frat guys. We’d crack jokes, everyone there would and we all just had fun. When you’re doing something that you love and are passionate about, and you have fun doing it, it makes it all rewarding. It’s not like you’re pouring concrete for fifteen hours straight, I get to tell stories and have fun. There’s a lot of interesting personalities that come out of the woodwork that you get to meet. There are so many talented people. I’m just grateful, that’s all I can say.”

HorrorFuel: “It sounds amazing. Would you be interested in doing more horror movies?”

Broch O’Hurn: “Oh, definitely! I do enjoy horror. If it gets you on the edge of your seat and can entertain you, I’m on board. At the end of the day, no matter what genre. I’d like to do more.”

HorrorFuel: “And we’d like to see you in more horror, any genre. I’m sure you having that massive Instagram following wouldn’t hurt your chances of getting a role either. What is it? Like 2.4 million? ”

Brock O’Hurn: “I feel like that is a hit or miss, to be honest. I do feel like, yes, it could open a lot of doors, but I also think if you really want to go in business – I’m so passionate about acting, behind-the-scenes, distribution, the front of and behind-the-camera – you have to put in the work no matter what. It takes work, it takes time, and yes, I got lucky and made a lot of great friends and collaborators. I can’t say that it hurt me, technically.”

HorrorFuel: “I’m sure it doesn’t hurt, that you’re talented, and let’s be honest, you won the genetic lottery.  I know that doesn’t hurt [laughter].”

Broch O’Hurn: “You’ve got to talk to my mom about that one [laughter]. Yeah, I’m not complaining about my size or my height or anything like that. As far as my physique, that’s taken years and years of hard work and educating myself, because I am actually a very, very skinny guy. I’m “blow away in the wind” skinny. I have photo proof [laughter], so it’s just something that it’s just working out and staying healthy in general. I’ve never found a bad thing about working out. I fell in love with it from an early age. I’ve never had a time where I regretted going to the gym and working out and staying healthy. It’s always been a positive in my life and I try to share that as much as I can, to be honest with you.”

HorrorFuel: “Any time you can find something positive to do in life, it can’t be a bad thing. You are a fitness model too, right?” 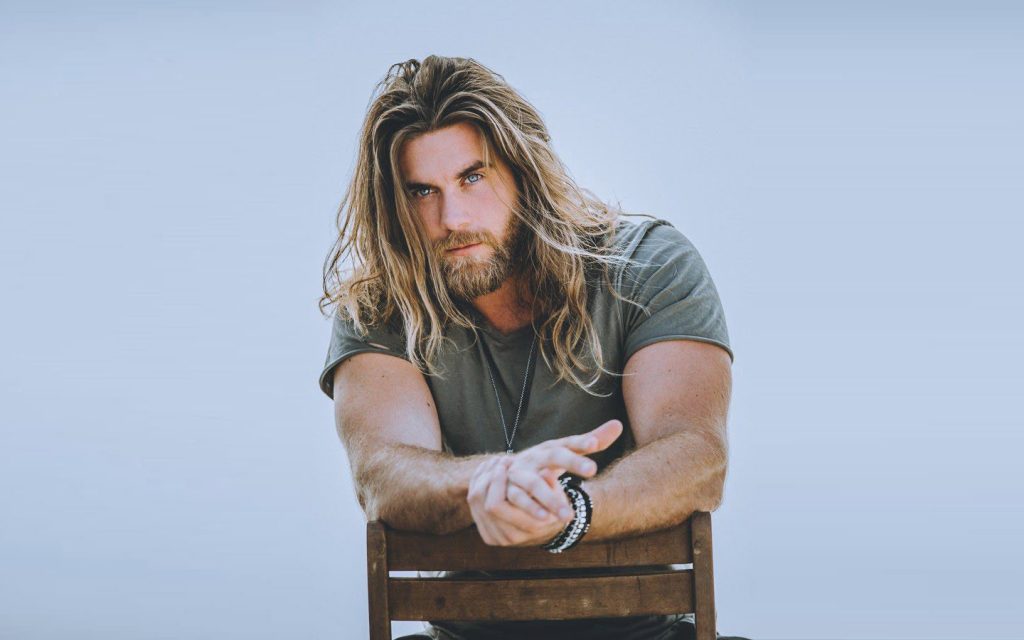 Broch O’Hurn: “I have done some fitness modeling in magazines. It’s just a lot about the kind of stories I want to tell. I know with my size it’s hard to play a guy sitting in an office with spectacles on, you know. I know I’m a very physical guy already, and I enjoy being physical, doing roles that are going to be physical and push me to my limits – and see how far I can push myself – and tell a story, that’s exciting to me. Again, I think it’s just a part of me and something that’s changed my life for the better. As long as I can, I’ll celebrate what my body can do and keep trying to work on myself.”

HorrorFuel: “It’s great that you know yourself like that and what you want to do. I could definitely see you playing something like a Viking or a Knight. But I still want to see you in more horror films too. I know The Resort is gearing up to be released, but do you have any other projects coming out soon too?”

Brock O’Hurn: “I did shoot a western called Desperate Riders, it’s coming out at the end of this year, and I’ve got two projects that I’ve signed NDAs for so I can’t talk about those yet. They’ll be coming out this year too.”

HorrorFuel: “I understand. But could you at least tell us what genre they are in?”

Brock O’Hern: “The western is more of a drama, one show is a comedy and the other show is a drama.”

HorrorFuel: “We look forward to seeing you in action again, and hopefully, we’ll see you in horror again soon too.”

Brock made it clear that he loves acting and any time I hear passion like the passion in his voice when he talked about acting and movies it makes me happy. Believe it or not, I don’t hear that much these days.

Be sure to check out The Resort, in select theaters and On Demand on April 30, 2021, from Vertical Entertainment.

← Prev: George A. Romero's 'Twilight Of The Dead' Being Made Four Years After His Death Next: 'Vlada: A Dracula Tale' Is A Perfect Tribute To Stoker's Classic...With A Twist →