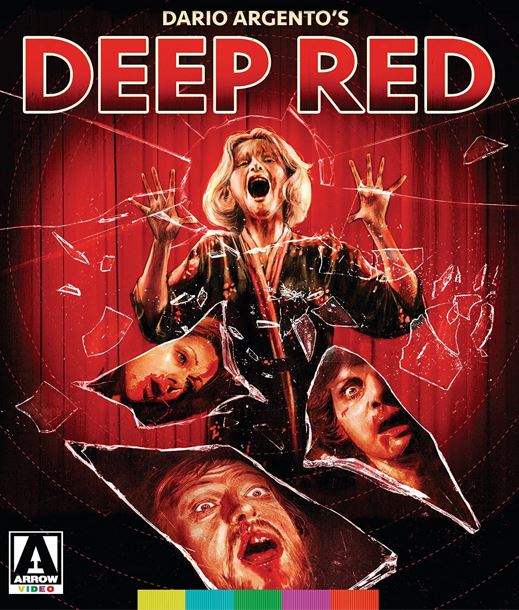 The chances that you folks haven’t seen Dario Argento’s arguably finest giallo experience Deep Red are pretty fuckin’ slim, so I’m not sure how much my wicked words will do to help you make the decision to purchase this new Blu-ray release from Arrow… because you know damn well you’ve already bought it, but here we go…

Jazzman Marcus (David Hemmings) is livin’ the life in Rome until he witnesses the murder of his neighbor Helga (Macha Méril), a noted psychic who just picked up some serious bad vibes from a member of the audience at her most recent mind-readin’ hootnanny.

Of course, given his complete lack of any sort of crime solving experience, our hero leaps balls first into solving the homicide, and to that end teams up with reporter/sass-mouth expert Gianna (Daria Nicolodi).

This naturally makes him a rather large target for the black-gloved murder machine stalkin’ the streets, and it’s only a matter of time before the body count includes one more. Will our un-syncopated hero win the day, or will he end up so much human gabagool?

This is Argento firing on all cylinders, so you can expect Deep Red to look like a goddamn million bucks… and boy howdy does it ever with the D-man and cinematographer Luigi Kuveiller delivering masterpiece-level images filled with a perfect combination of popping color and chiaroscuro… not to mention the creative death sequences (all of which is set to the pulsing electronic score of legendary musicians Goblin).

Also on point is the chemistry between Hemmings and Nicolodi with the bickering duo making for fine heroes that are fun to watch as the proceedings become ever more creepy and deadly. Speaking of such things…

This release contains two cuts of Deep Red; the original Italian cut, and a truncated “export” version. It’s in the Italian rendition that we get more of that interaction between our leads that expands their relationship… which plays into the storyline for sure, but slows down the murderous meat n’ potatoes we all came for.

Along with the aforementioned cuts of the film, this two-disc set contains a host of eerie extras sure to please any lover of ol’ arcane Argento!

Disc one features two audio commentaries; one from genre film historians Troy Howarth and Nathaniel Thompson who provide details of the film’s production and legacy while managing to convey a fan’s excitement of the work at hand, and the other an archival chat with filmmaker Thomas Rostock who provides a more scholarly analysis of the film.

Finally, we get trailers, image galleries, and an “Easter egg” featuring dailies from the film.

Disc two brings us a host of archival material including an in-depth, three-part visual essay about the picture, a tour of the Profondo Rosso (which means Deep Red in Italian) shop in Rome by owner and genius filmmaker Luigi Cozzi (Starcrash), interviews with Argento, Nicolodi, and Simonetti, and the film’s US trailer.

Deep Red is a murderous masterpiece, but you already know that… but this release from Arrow will definitely provide fans with plenty of new material to explore!

← Prev: Blu-ray Review: Death Screams (1982) Next: Sinister Intentions Are Teased In The Trailer For 'Shattered' →