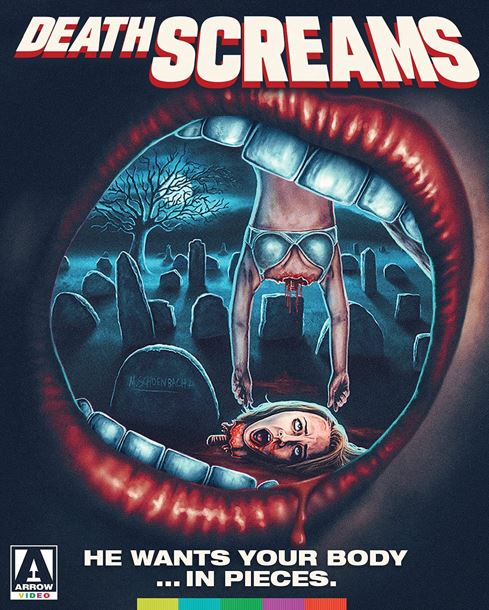 Death Screams begins with a classy theme song that would be right at home in a historical drama… that is until it decides it’s heralding the arrival of the King of the Entire Fucking Universe (or is kicking off the ABC Movie of the Week at any point in the late ’70s, then going into a free form jazz odyssey before transitioning to the next piece of music that sounds like it would be on some rinky-dink live-action PBS kids show in the early ’80s.

Why am I taking the time to tell you this? Well, it’s because it’s batshit crazy, that’s why… and let me tell ya cats n’ creeps, the images that shit accompanies are pretty out there as well!

Beginning with a fuck shesh turned deadly (this just so happens to be the first sentence in my upcoming auto-erotic biography as well… ) … which comes complete with a “dick caught in zipper” joke as well as footage of a speeding train… Death Screams soon introduces us to the lovable residents of a small North Carolina town populated by the usual suspects: waitress with a heart of gold, fat-ass sheriff… with beard, lovable diner owner… also fat, also beard, man who suggests the proprietor of a kissing booth can perform oral sex on him because she is unavailable for kisses as she is going on lunch break, psychotic n’ horny pie saleswoman, a granny, woman who looks like the titular character from Mama’s Family, but with red hair like Vicki Lawrence has under her Mama wig… and more!

Yup, that’s right… there is a mysterious figure stalking the town, and the body count soon begins to rise… just like the libidos of our “young” heroes… heroes who may not live to see another day!

Oh, and judging by the sound of things, some one has placed a rather large ticking-time bomb somewhere within the sheriffs office, but no one acknowledges it…

As crazy as all of that sounds, and it is… Death Screams is a pretty dynamite lil’ slasher with some surprisingly strong performances. And I know; I made fun of those frisky freaks up yonder, but the folks that play them have a ton of charisma and actually elicit sympathy when their ranks begin to diminish thanks to that murderous madman skulking about!

Speaking of which, don’t expect a new horror icon to get ya all hot n’ bothered. Mostly you never see the fucker, and when you do, it ain’t nothin’ visually (but damn that ridiculous reveal… trust me, you’ll see). Buuut, the kills they are responsible for are really brutal as all fuck… and “no bullshit” if ya dig… with a merry-go-round set strangulation being particularly effective.

The suspense is tight n’ ouitta sight as well (and is of the slow burn variety up to the mayhem packed finale), but that absolutely bonkers fuckin’ score continues it’s audio assault… and it even adds an instrumental Jimmy Buffet-style Muzak number… absolutely stunning.

While everything I’ve mentioned above is a gift into and of itself; the fine folks at Arrow Video have included a bevy of bonus material on this Blu ray release!

Kicking things off, we have two brand-new audio commentaries; producer Charles Ison and special effects artist Worth Keeter moderated by filmmaker Phil Smoot, and one with the fine fiends of The Hysteria Continues podcast. The first is a nuts n’ bolts, rather self-effacing journey through the film’s production by those that were there, while the second is an upbeat and fun fan analysis of the film.

Next comes a fantastic modern day look back at the film’s production featuring interviews with Ison, Keeter, writer Paul Elliott, actors Hanns Manship and Curt Rector, actor/producer’s assistant/assistant supervising editor Sharon Alley (the pie saleswoman, who has one of the best scenes in the whole film by the way), and actor/talent wrangler Robert “Billy Bob” Melton.

Finally we get an alternate opening sequence featuring the film’s alternate title, House of Death, a collection of TV and radio spots (including a real showstopper featuring Ison himself in a true Hitchcockian piece of promo… check it out below!), and a selection of image galleries (and yes, that TV spot gets on all to itself!).

A true gem in the crown of the golden age of slasher flicks, Death Screams is a well-acted, violent, fun-filled stalk n’ slay romp you shouldn’t miss!