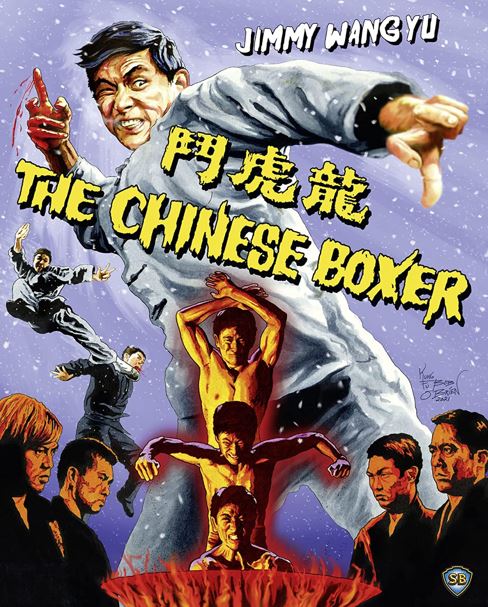 So peep this shit; a real ballsy mother fucker by the name of Diao Erh-yeh (Chao Hsiung) strolls on into the Chung Yi Chinese kung-fu school and starts whipping ass like a human tornado… until the school’s Master arrives and delivers an absolutely savage beating to that crass Judo master!

Defeat goes over like a fart in church for Diao, and he vows revenge in the form of  “karate-men” … and indeed, men that know karate (eventually joined by a couple of samurai, because fuck yeah!) bestow an absolute shitstorm of karate-based murder and mayhem on the student body of Chung Yi… which leaves the town rather defenseless and an easy target for karate-men conquest… which involves more casino ownership than karate…

This doesn’t sit well with Chung Yi star pupil/karate abuse survivor Lei Ming (Jimmy Wang Yu… who wrote and directed this picture with production from the legendary Shaw Brothers Studios) so he decides to undergo some of that good ol’ “ridiculously over-the-top training” (in this case involving demon statues, Dutch angles, boiling hot sand, and boring weights) in order to get some kung-fu revenge against those casino-crazy karate-men… which includes more surgeon costumes and arson than you may have guessed…

Triple-threat Yu (himself a real-life ass-kicker of a man) presents a tale that moves at lightning speed, is populated by characters that would be right at home in any number of anime flicks, is saturated with blood and gore, and contains more action than you can handle!

The main thing to remember with this picture is; the fight sequences are the star, and they get the majority of screen time… and since absolutely no one throws on a kung-fu flick to relish in the rich drama of the human condition, this should come as the best news in the whole wide wicked world!

And what fights they are, as they run the gamut from stylized martial arts brawls, to swordplay, to wire-work derring-do… and all of them are absolutely drenched in spraying blood, gouged eyes, decapitations and so much more, and edited to frenzied perfection! It’s absolutely glorious, and never let’s up through the film’s 90 minute runtime, with the third-act’s snowy locale a real visual feast.

Along with the battles we get some great performances as well with Wang Yu making for a stoic underdog that manages to persevere despite the overwhelming odds against him, and Hsiung chewing every bit of scenery in sight as the Judo-master manipulative madman who starts all of this trouble in the first place.

But, the greatest character of them all has to be martial arts movie mainstay Lieh Lo as the psychotic karate master Kitashima, a sharp-dressed cartoon-character of a villain that is an absolute scream with his grease-paint stubble and Ringo Starr wig… and his penchant for brutal homicide and just straight up destroying fucking buildings when he gets that ol’ wild hair up his ass.

I haven’t enjoyed a performance, not to mention a movie, more than this in years!

Speaking of “great”, the fine folks over at 88 Films have included some fantastic bonus features on this Blu-ray release!

First up we get an audio commentary courtesy of writer and film critic Samm Deighan who provides a super-informative conversation that covers the film’s production, it’s place in martial arts film history, and the career of Wang Yu, followed by journalist David West offering an analysis of the film at hand and it’s influences.

After that comes an interview with stuntman Wong Ching, the film’s U.S. trailer (under the preposterous name of name Hammer of God) along with Hong Kong and English versions, and the U.S. TV spot.

Simply put, The Chinese Boxer is absolutely amazing, and it will doubtless blow your ass away, especially if you like your fightin’ flicks drenched in brutal bloodshed!!