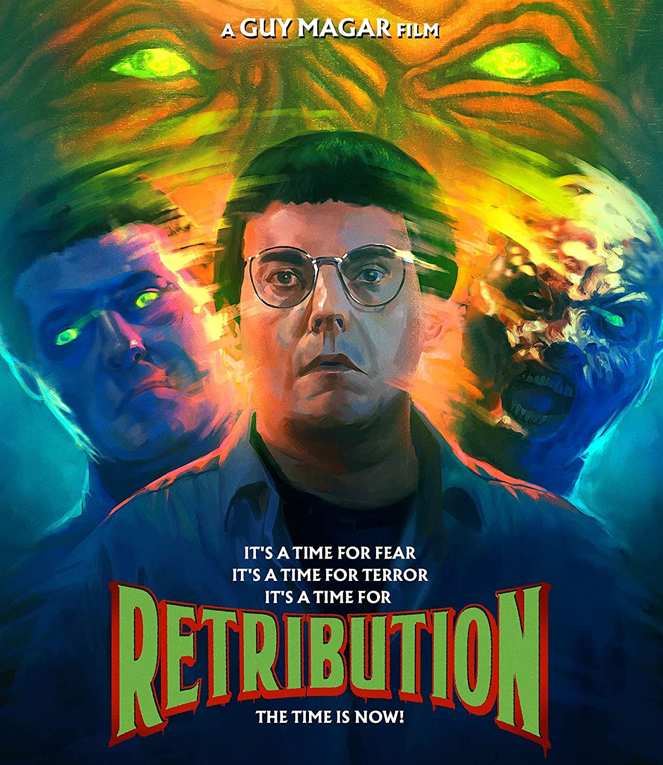 Suicidal artist George Miller (Dennis Lipscomb, who gives the frowniest performance since Mark Frost in Brian Yuzna’s Faust: Love of the Damned) takes a swan dive off a tall building, but after a brief stay-over in The Who’s laser-light tunnel (previously utilized for fucking by Frank Langella in John Badham’s 1979 adaptation of that grand-pappy of all vampire whoppers, Dracula)… which is populated by a screaming, floating zombie head… our hero is revived and sent to stay in an institution.

Once there he gets wellish (minus those nightmares where he’s a murderous lunatic) and soon returns to his apartment in the same shitty building he jumped off when this whole debacle began! So about those “nightmares”…

George keeps getting involved with random people… and he makes them kill themselves with his newly-acquired glow-y green eyes and evil-ass voice… in-between attending a “welcome home” party in his honor where hookers and little people in fireman’s helmets cavort to records that were new when your great grand-mother was three while George is ridden around an apartment on the back of a biker’s motorcycle, that is.

As the body count rises, George struggles to determine just what in the hell is going on inside his mind… and the answer will surely make you say “Well, that certainly is an explanation”!

Man, where to begin with Retribution…

Firstly, this film is absolutely batshit insane. Everything from the bizarre kill sequences, to the crazy cast of characters that would be right at home in a Frank Henenlotter flick, to the awkward romance between George and the hooker with a heart of gold, Angel (Killer Klowns from Outer Space‘s Suzanne Snyder), to the magical Doctor Rasta (Danny Daniels), to the dog in sunglasses and pearls… everything is completely, inexplicably “off”, in a way that I can only describe as “enthralling”.

Selling all of this delirious nonsense is a really strong cast, with Lipscomb absolutely owning his role with a performance that runs the gamut from shy to unhinged and all areas between and beyond… well beyond… right through the damn film and back in the other side… surrounded by a supporting cast of familiar faces including the aforementioned Snyder, and Gremlins‘ Hoyt Axton, some kickin’ cinematography courtesy of Gary Thieltges (that features buckets of beautifully lit gore and Day-Glo colors in equal measure), a bouncy, totally ’80s score from composer (and long time John Carpenter collaborator) Alan Howarth, and fantastic practical effects provided partially by the legendary Kevin Yagher (A Nightmare on Elm Street 2: Freddy’s Revenge and Child’s Play to name two among many, many others).

On the downside, there is some unnecessary slaughterhouse footage present here that is particularly stomach churning, so if you’re sensitive to that sort of material, you have been warned… but also be warned that in that same sequence, a mother fucker is tossed into (and incased in) an animal carcass, and then cut in half by a spinning saw blade… but not before the victim attempts to crawl out of the meat’s ass… and that’s rad!

The only way I can follow that is to tell you lascivious lot about the special features present on this Blu-ray release from Severin!

Next comes a short film from Retribution‘s director/co-writer Guy Magar (with optional commentary), as well as a collection of trailers, and an image gallery.

Disc two brings us a longer cut of the film with it’s gore sequences restored to their original, uncensored glory… and features a nuts and bolts look at the film’s production courtesy of a new audio commentary from the no-nonsense Magar.

Also included in this release is a separate CD featuring Howarth’s soundtrack for the film.

Guy Magar certainly delivered one hell of a unique fright flick with Retribution: and meat packing plant footage excluded, this is a psychotronic, grimy, preternaturally psychological thriller that I can’t recommend enough to you wicked weird-o’s!

← Prev: Terror Films Announces First Films Premiering On Their New YouTube AVOD Channel Next: The 5 Scariest Things That Have Ever Happened In Movies →