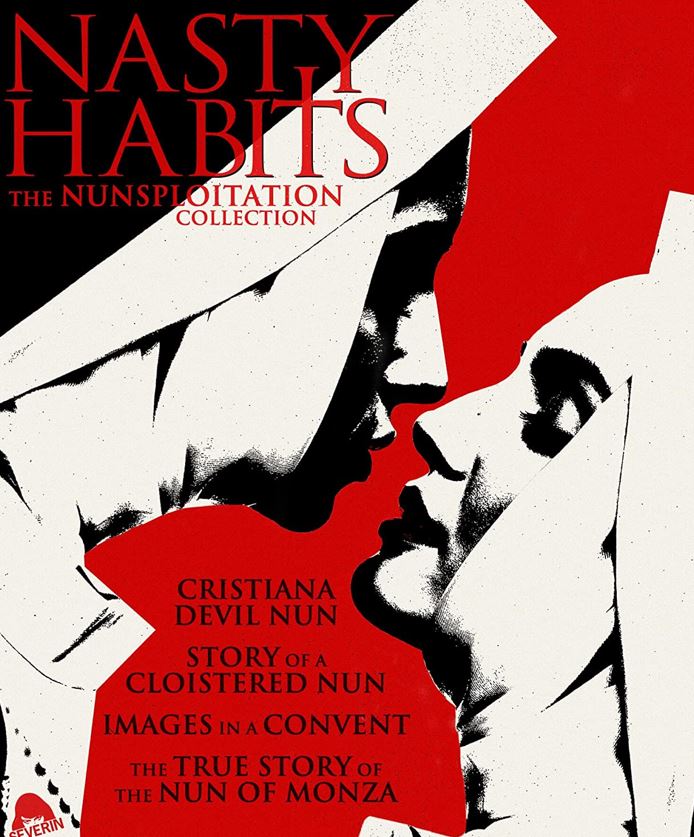 Nuns… I’m indifferent to them, but some of you find them terrifying… or sexy… or both… and that last lil’ bit is what the folks over at Severin are counting on with their Blu-ray release of Nasty Habits: The Nunsploitation Collection!

After straight up fucking in front of everyone on an airplane, Cristiana (Toti Achilli) swears to become a nun if she can survive the sudden engine trouble (i.e. being totally engulfed in flame) the plane soon encounters at the stroke of her inauguration into the Mile High Club.

True to her word she does indeed enter the convent, but being Cristiana she soon begins having sex like a mother fucker with both an ascot enthusiast of a painter as well as Sister Eleonora (Magda Konopka)… and once she sneaks her boyfriend into the covenant things go completely haywire as everyone’s constant fucking leads to questions of faith and endless debauchery!

While things in Cristiana Devil Nun never turn Satanic as the title suggests, but there is plenty to enjoy with this flick! For one, there is an absolute truckload of naked flesh and ribald goings on (a theme echoed by the other film’s in this collection as well as you will see), add to that hilariously jarring real sex inserts, an absolutely charming (and entirely unconvincing) model airplane, and plenty of groovy fashions and happenings… not to mention Cristiana’s hard rockin’ theme song!

As for special features on disc one we get the extended Italian cut of the film, as well as a video essay showing the role the work of The Marquis de Sade played in the nunsploitation genre.

Next comes 1973’s Story Of A Cloistered Nun:

All grooviness has groovied away as we begin this flick, as this is a period piece set in the late 1500’s.

Carmela (Eleonora Giorgi) is none to pleased about her upcoming arranged marriage to a wealthy aristocrat, and decides she’d rather get it on with peasant Julian (Antonio Falsi). This goes over rather poorly with her parents, so they chuck her ass in a convent to bury that shame deep.

Director Domenico Paolella delivers a surprising blend of both the ribaldry one would expect from a tale such as this, as well as a surprisingly upbeat follow through which is admittedly very atypical for the genre this film helped usher in.

While a tad leaden in the ass at times, Story Of A Cloistered Nun is an entertaining enough tawdry romp, and it never fails to look sumptuous and rich.

As for bonus content on disc two we get interviews with actresses Martine Brochard and Giorgi, as well as camera operator Daniele Nannuzzi, as well as the film’s trailer.

Disc three brings us another period piece (this time we are in the nineteenth century) in the form of Joe D’Amato’s 1979 flick Images In A Convent:

The supposedly innocent lil’ lamb Isabella is anything but, and before you can say “ribald antics”, Izzy is up to her ass in lesbian sex, ass whippings, and an escape plan that may or may not involve the devil!

Now this is what we came for boils n’ ghouls! D’amato makes everything look like a million bucks with dreamlike cinematography (courtesy of the director himself), plenty of Sapphic sex (layered with nun fetishism), torture, and even a lil’ sprinkle of the ol’ supernatural shenanigans, which were sorely missing in most of the flicks in the genre in my not so humble opinion.

On the downside, there is a rather nasty rape sequence here (as if there are any other types), so if you are sensitive to such material, you have been warned.

Bringing back the positive vibes, the special features on this disc include an excellent audio commentary courtesy of author/genre cinema expert Kat Ellinger, as well as 25 minutes of deleted scenes with optional commentary by the same.

After that bit of horseplay we get down to brass tacks, as Sister Virginia (Zora Kerova) keeps havin’ the sexy dreams where she wanders around a church seeing herself posed all nekkid around a church before beginning to blow Christ. To remedy this, Virginia has her topless nun roomie beat the shit out of her with a whip… that’ll make it all better…

It isn’t long before that horn-headed horn-dog and his pal, the aristocratic walking erection Giampaolo Osio (Mario Cutini), have their minds (and cocks) set on our heroine… which is bad enough, but when the stern Mother Superior (the great Franca Stoppi, she of the fantastic 1979 Joe D’Amato stomach-churner Beyond the Darkness) goes tits up, Virginia is elected to the role which leads to jealous schemes courtesy of nun-to-be Margherita (a delightfully scenery chewing Leda Simonetti), and finally to murder… and beyond (just echo that sit in your mind).

So this is a Bruno Mattei film written by his partner in crime Claudio Fragasso (the maestro behind Troll 2) so you can expect a level of… well, what maestro Bruno did best; deliver the “wrong” first, do the rest later… maybe.

As far as extras here, we two interviews; one with Fragasso, and the other with Kerova.

If you’re keepin’ score at home, the stand outs here were The True Story of the Nun of Monza and Images In A Convent (in that order), with (ironically enough) looking the worst visually with some grain and an over all murky appearance (the first two films in the set arguably have the best picture quality).

← Prev: Movie Review: 'See For Me' Is A "Must See" Home Invasion Thriller Next: Trailers Arrive for Emotional Horror Films "Nocturna: Side A – The Great Old Man’s Night" and "Nocturna: Side B – Where the Elephants Go to Die" → 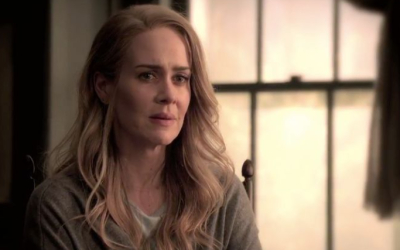 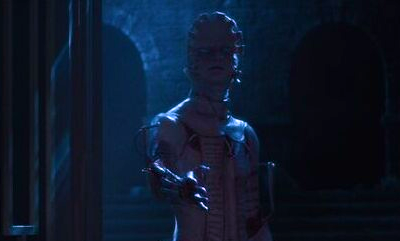 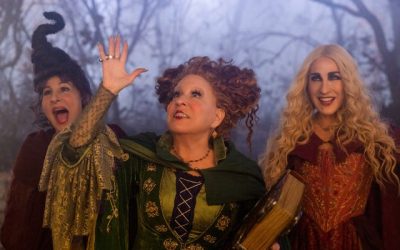