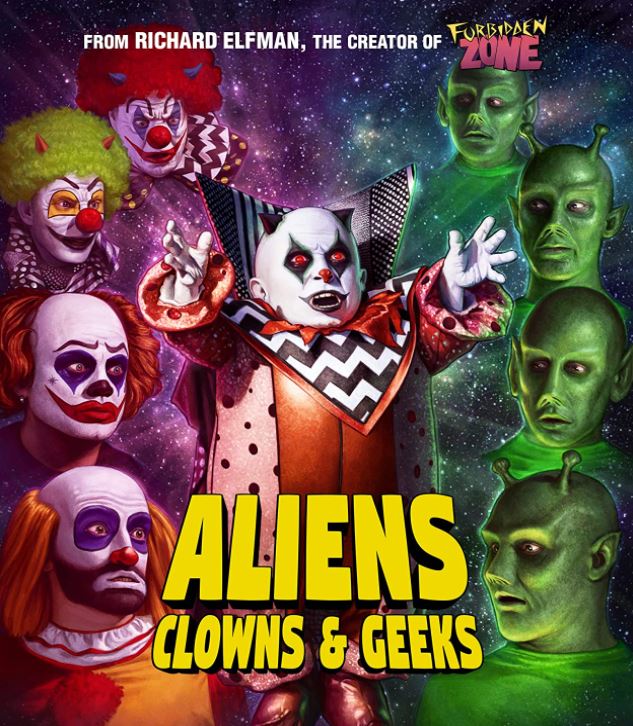 Frenzied filmmaker/musician Richard Elfman’s (The Forbidden Zone) Aliens, Clowns & Geeks concerns the adventures of Eddy Pine (played by Bodhi Elfman… wonder how he got the job), an out of work actor (ain’t they all folks, aint they all… ) that finds himself in possession of the key to the universe which gets shoved up his ass after a religious-level ménage-a-trois blows his brain (and the rest of him as well) across time and space.

This makes him the prime target of a group of extra-terrestrial clowns led by Emperor Beezel-Chugg (played by the Austin Powers series’ Verne Troyer no less), and puts him in close contact with all manner of mayhem including some little green men from beyond the stars, a mad scientist (played by French Stewart, who never gets the credit he deserves as an actor… the dude always seems like he’s having the time of his life), and fuckin’ Norm from Cheers, who here plays a priest and not Norm… George Wendt I mean.

As you may have wrapped your monstrous minds around; Aliens, Clowns & Geeks is one fucked-up flick. It’s part darkly comedic send-up of Hollyweird, part raunchy sex-comedy, part drive-in sci-fi flick, and all absolutely batshit… pure, and simple batshit; in its purest form.

Add in a soundtrack featuring music from Elfman’s brother Danny (who scored a few film’s here and there with Tim Burton and managed to create some of the most iconic and recognizable music in all of sound track mother fuckin’ history) and you have the cherry on top of this off-the-wall cinematic sundae!

But such nonsense takes a talented cast to pull it off, and all of those names mentioned previously are more than up to the task, especially Bhodi; who in defiance of my joke above is an amazing actor who you’ve seen in tons of things, and he manages to make Eddy relatable enough to guide the audience through the bombastic chaos.

Speaking of a guide through the chaos, there are some answers found as to the “who’s” and “why’s” with a collection of behind-the-scenes interviews with cast and crew, plus a separate interview with Richard Elfman. Just for shits we get a music video and the film’s trailer as well.

Aliens, Clowns & Geeks provides everything the title promises, and then some; it’s a fever-dream kaleidoscope of debauchery, nonsense, and cinematic lunacy and shouldn’t be missed by you adventurous lovers of the absolutely absurd!

← Prev: Movie Review: The Brain From Planet Arous (1957) Next: New Found Footage Horror Takes Us To 'A Town Full Of Ghosts' (Trailer) →

Back in 2019, viewers went through a gambit of emotions, mostly disgust and confusion, after watching the documentary...

MUBI is proud to announce the U.S. theatrical and streaming release of The Box (La Caja) the gut-punching...

Today, Paramount Home Entertainment is releasing the psychological horror-thriller The Visitor on Digital and On...