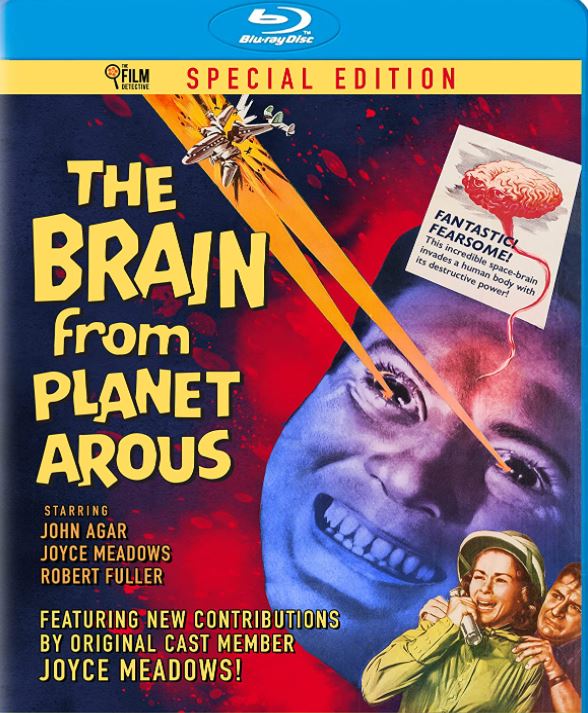 After some patented ’50s era wise-assin’ and a trek through the desert, Steve March (John Agar) becomes possessed by an evil brain from outer space with bedroom eyes named Gor (voiced by Dale Tate and supplemented by non-stop War of the Worlds noises).

At first Steve/Gor is just an animal abusing handsy creep, but before long he sets his sights higher and begins threatening the entire world with his evil machinations, all realized through the glory of that sweet, sweet stock footage.

You read that deliriously daffy sinister synopsis up top, so you already know that The Brain From Planet Arous  has a hell of a yarn to spin, and boy-fucking-howdy does it ever! Add in some groovy creature designs for our creepy cerebrum, and another effective use of those foil contact lenses Commander Mitchell sported on Star Trek‘s second pilot, Where No Man Has Gone Before.

The real heavy lifting here however is done by Agar who is amiable as March, and completely full-on super-villain when controlled by Gor. It’s a fun performance, and it truly seems like the actor is eating the whole thing up with a spoon!

Speaking of fun, The Film Detective have thrown some enjoyable special features on this Blu-ray release including: a highly entertaining commentary track courtesy of drive-in film historians Tom Weaver (who also provides an essay for the included full color booklet), David Schecter, Larry Blamire, and star, Joyce Meadows (who, by the by, delivers an absolutely batshit intro to the film that is worth every goddamned penny they are charging for this thing on it’s own), and a duo of retrospectives covering the career of the film’s director Nathan Juran (who also directed the suburb The 7th Voyage of Sinbad the following year… among other sci-fi and fantasy classics).

The Brain From Planet Arous is everything an enjoyable creature feature/sci-fi shocker should be; ridiculous, earnestly acted, and loaded with plenty of practical monster goodness… this is the good stuff cats n’ creeps!