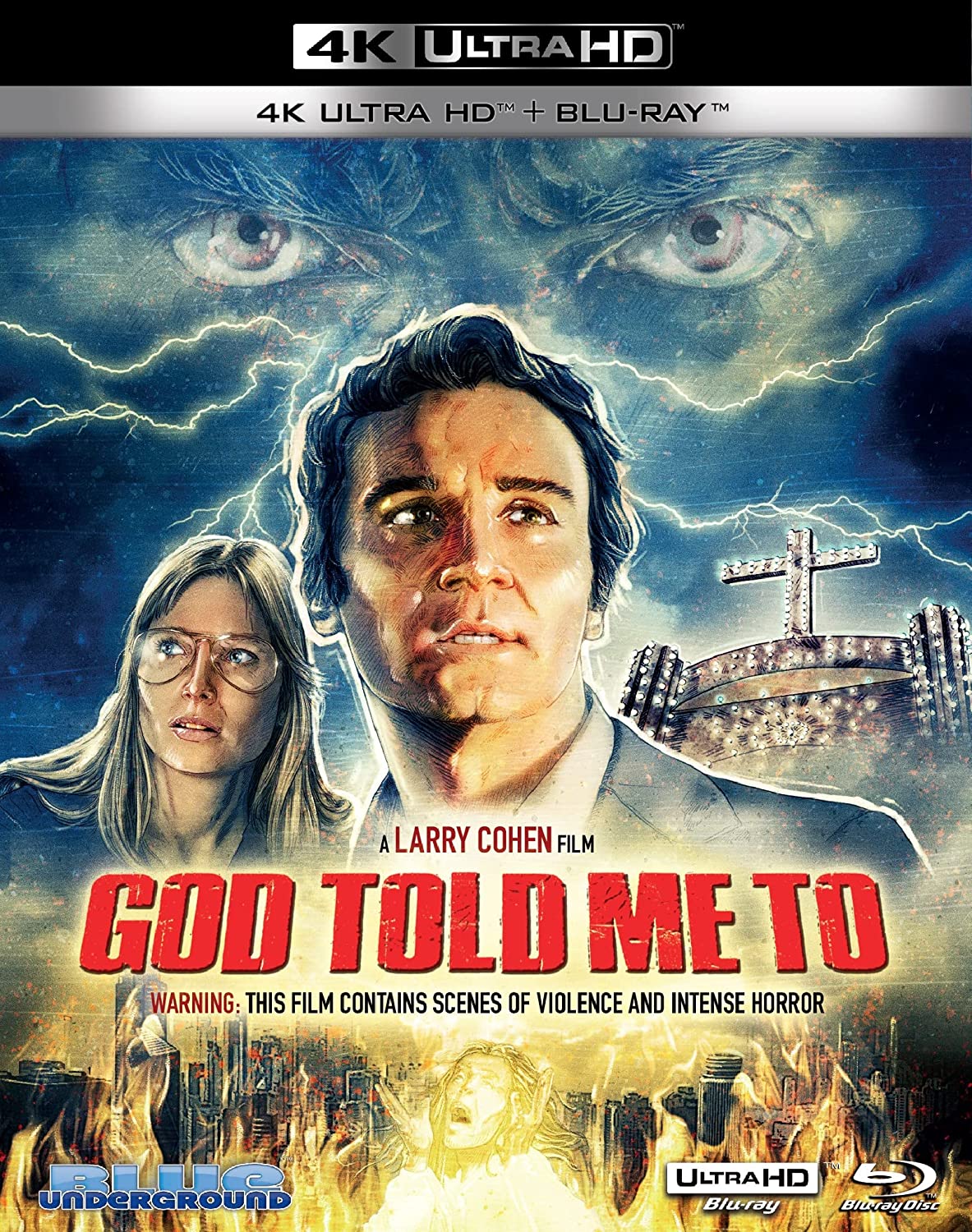 This is gonna be a stone-cold bitch of a review to write, cats n’ creeps.

Ya see, legendary genre filmmaker Larry Cohen’s (The Stuff, Q: The Winged Serpent, the It’s Alive series) God Told Me To, while bein’ a bone-a-fide classic in my book, contains elements so batshit bizarre that I would like nothin’ better than to flap my jaundiced jaws about every last one of ‘em, but that would do any GTMT virgins in the audience a Kong-sized disservice. All right, read on to see if I can pussyfoot through a potential mine-field of spoilers and still grab your interest enough to make you buy this damn thing!

God Told Me To concerns the adventures of Peter (Tony Lo Bianco), a New York City detective who is all hot ‘n’ bothered by a series of brutal shootings, all of which contain a unifying element: the perpetrators simply say that god told them to commit the murder-foolery.

As a special treat to all of you Heartbeeps fans (whose numbers are legion I’m sure), Andy Kaufman is involved in the goings on as a trigger-happy cop who turns a St. Patty’s parade into a scene so chaotic that everyone in attendance surely had a case of the shamrock shakes (mostly because it becomes very obvious that ol’ Larry C. was filming all of this without permits in the midst of actual NYC crowds!).

Eventually ol’ Pete learns that a preternatural prophet who goes by the unbelievably prosaic handle of Bernard Phillips (Richard Lynch, lookin’ how I would imagine Brian Connolly from The Sweet would appear if he tried out for Jesus Christ Superstar after accidentally falling into a vat of golden phosphorous paint) has paid a house call to every Instapsycho© … and that is where I have to stop yammerin’ on about the plot to this flick.

But trust me, you’ll never guess the direction this thing goes in. The only thing I will say is to be on the lookout for an iconic prop from a seminal 70s Sci-Fi show that makes an appearance as unexpected as a full set of teeth would be in your average Wal-Mart customer.

As usual, the package put together for this release by Blue Underground is the tarantula’s teeth!

For one thing the 4K transfer utilized here is clear as hell with interiors and exteriors presented with minimal grain… which is good, because you want to see all of this fever-dream insanity in all of it’s ghoulish glory. Colors are fantastic as well with warm skin tones and some beautifully lurid hues that practically pop off the screen (especially during the film’s off-the-wall climax).

The picture isn’t the only thing “enhanced” here, as the extras present here add greatly to the enjoyment of this putrid picture!

Things kick off with an archival commentary from Cohen that takes us through the nuts and bolts of the film’s creation, followed by a new commentary courtesy of film historians Steve Mitchell and Troy Howarth that tackles the film’s themes, the careers of it’s cast, and provides plenty of insight into Cohen as a creator.

Following that we get two collections of trailers and TV Spots for the film both under it’s regular title, as well as it’s alternate title of Demon.

Disc two of this release contains all of the above (this time on Blu-ray format); as well as archival interviews with Lo Bianco, and special effects maestro Steve Neill, two Q&A sessions with Cohen from past screenings of the film, and a poster & still gallery.

God Told Me To is an essential psychotronic film for any horror-hound to possess, and it’s never looked better than on this 4K release, so what are you waiting for, God to tell ya to pick the damn thing up?!!