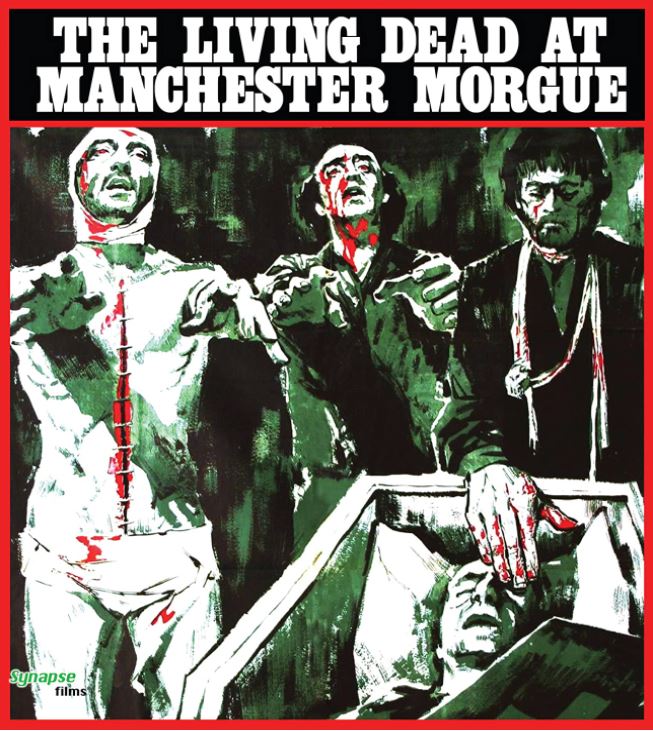 Less than five minutes into Jorge Grau’s 1974 terror tale, The Living Dead in the Manchester Morgue (or Let Sleeping Corpses Lie as it’s sometimes known) we get psychotronic imagery, mod motor-bike riding, full-frontal nudity, and excessive bongos… none of you know just how much this speaks to me…

Brash (read: kind of douchey) artist/Richard Branson clone George (Django Kill… If You Live, Shoot!‘s Ray Lovelock), he of the motor-bike mentioned up yonder, is country bound to help his friends fix-up a house when his bike is smashed by Mini Cooper enthusiast Edna (Cristina Galbó), who in turn is heading out to visit her heroine-addicted sister, Katie (Jeannine Mestre)… who also lives in the ass-end of nowhere, which results in the duo becoming road buddies!

After immediately becoming lost as fuck and stopping to ask for directions, the duo discover that farmers in the area are using radiation treatments to reduce the number of insects destroying their crops. Speaking of that dodgy science, it seems all that radiation is re-animating corpses in the area who immediately go kill-crazy, as one does in such a scenario.

Of course the local fuzz aren’t even going to remotely consider monsters as the cause in the recent rise in homicides, so guess who gets the rap? That’s right; an artist, a caring sister, and a jittery addict (to be fair, her controlling photographer husband was a victim)… seems reasonable.

Coming in the insanely influential wake of George A. Romero’s 1968 groundbreaking masterpiece Night of the Living Dead, The Living Dead in the Manchester Morgue borrows a few things from that film including it’s gut-munching, shambling antagonists, it’s rural setting, and socio-political commentary (here ecology takes the place of racism), but it definitely forges it’s own path.

Though set in England, the film was lensed mainly in Italy, and the over-all flavor of the film definitely has a European flair… hell, even the scenes of cannibalism (which earned the film the coveted Video Nasty title which lead to it being banned in England) are more akin to what you would later find in Lucio Fulci’s unofficial follow up to Romero’s 1978 classic Dawn of the Dead, 1979’s Zombi… not surprising as this film’s effects artist, Gianetto De Rossi went on to work on that film as well as Fulci’s The Beyond from 1981.

A major difference between the films is the murder mystery sub-plot found here, with our wrongly accused protagonists hounded at every turn by a hard-ass police Inspector, played by Lawrence of Arabia‘s Arthur Kennedy, which adds some solid tension before the suspense hits overdrive in the third-act with the full-on zombie action we horror hounds drool over!

Of course another difference is that this film was a color production, and let me tell you, the new 4K transfer (sourced from a 35mm camera negative) utilized by synapse films here is absolutely gorgeous. The crystal clear image displays warm flesh tones (for the living anyway), eye popping color (especially once the grizzly gore makes the scene), and nary any grain… in other words the film looks better than it (most likely) ever has!

Adding to the appreciation of this fabulous fright flick are a coffin’s worth of bonus materials including two audio commentaries from film scholars Troy Howarth, and Nathaniel Thompson & Bruce Holecheck respectively that take us through the film’s production, the careers of it’s cast and crew, and the picture’s legacy in the zombie genre.

Additionally we get an feature-length documentary that explores Grau’s life and career in detail, a new interview with effects maestro De Rossi (along with a Q&A with the same from Festival of Fantastic Films, UK), the film’s original trailer, a collection of TV and radio spots.