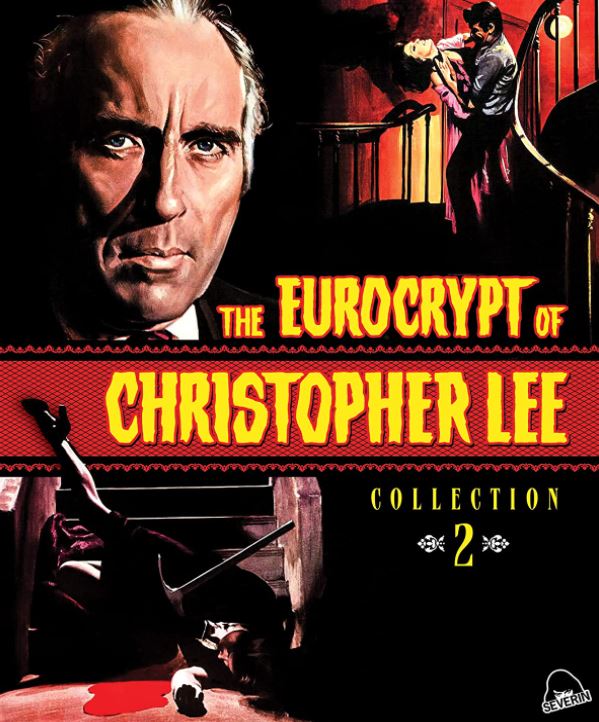 Sir Christopher Lee had one hell of a run, and while being one of the greatest screen Dracula’s of all-time he also found time to star in some of the biggest film franchises in cinema history such as Star Wars and The Lord of the Rings… he also found time to star in all-manner of seriously bizarre shit, such as the 1983 superhero parody The Return of Captain Invincible (which I reviewed right here) and much of the material that comprises The Eurocrypt of Christopher Lee: Collection 2 from those delightful devils at Severin Films!

Always one to get down with a fang bang, Lee stars as Baron Roderico, a vampire… imagine that!

Anyway, Baron R picks up stakes (not literally, that would kill the auld fellow) and arrives at the castle of his broke as a joke nephew… only to find it has been converted to a hotel as said nephew is now the bellboy!

It isn’t long before the Baron is trying to sink his teeth into the hotel’s guests as his nephew attempts to foil him at every turn… but how long before he falls victim to his uncle’s preternatural powers?

Directed by prolific Italian writer/director Steno, Uncle Was a Vampire is a fun lil’ euro romp that mostly hits the monstrous mark nearly every time. While the cast on a hole is good, Lee is by far the master thespian of the bunch, and thankfully he seems more than game for some broad comedy, even if it pokes gentle fun at his most iconic role.

Also solid is the comely ‘50s era cheesecake on display that manages to keep things sexy… but not that sexxxy given the production date and all, and the hotel/castle environment is rather awesome as well.

Given that glowin’ praise, you’ll doubtless be pleased as putrid poisoned punch to learn that there are 2 versions of this yarn available here; a nicely scanned from 2K theatrical version (which has some duly noted stability issues here and there), and a visually lesser television cut.

Other extras on disc one include an interview with European film historian Dr. Pasquale Iannone, and a commentary track with Christopher Lee biographer Jonathan Rigby and Hammer historian Kevin Lyons on that aforementioned TV version.

Moving on to disc two…

Anyway, ol’ P.B.S. goes apeshit on the London streets with reckless, extortion-centric evil abandon. Enter: Capt. Allerman (Lee) whom the FBI call in to try and put the end to Steve’s shenanigans and the resulting gang war left in his wake!

This 1962 German krimi flick courtesy of director Helmuth Ashley is a nice big dollop of over-the-top pulp-noir with two titans of the (slightly strange) silver screen playing their roles to the hilt (watch the subtitled role to hear Lee speaking his lines in perfect German… which is even more amazing as his voice is dubbed by some other dude in the English track for… reasons).

All of this is presented in crystal clear chiaroscuro (makes sense seeing as how this is a black and white picture after all) courtesy of a brand-spankin’ new 2K scan sourced from the dupe negative.

Adding to the fun here, this disc contains the film’s trailer and two audio commentaries; one with Mondo Digital’s Nathaniel Thompson and author Troy Howarth, and the other with film scholars Kim Newman and Barry Forshaw. While covering the same ground, both offer distinct viewpoints that offer much to enhance your viewing enjoyment!

Disc three brings us 1973’s Dark Places; Don Sharp’s supernatural shocker that finds our lad Lee in the role of Doctor Ian Mandeville, one of a handful of fiendish folks hoping to get their mitts on the fortune of the late Andrew Marr, which is rumored to be hidden within his haunted former home!

While a tad slow in places, this flick is a fine time indeed with it’s cast of familiar faces (besides Lee you also get Joan Collins and Herbert Lom) and rather solid flashback sequences, and it all looks good thanks to the new 4K transfer utilized sourced from an interrogative found in a secret lab deep in the heart of ol’ London Towne guarded by a nest of vipers and a rather surly gorilla named Dirk… or something close to that.

Special features here include an audio commentary with good ol’ Thompson and Howarth, an interview with Lee scholar Jonathan Rigby, the film’s U.S. teaser trailer, and a Brazilian TV spot.

Disc four through 6 (all contained in one case) brings us 1976’s Dracula and Son:

Lee finds himself once again in familiar territory in his last outing as the king of the batty-set; Dracula… and this time he’s been chased from his Transylvania abode by that ol’ classic; the angry mob. Eventually he ends up in modern (as of the late ‘70s anyway) London at the residence of his estranged son Ferdinand (Bernard Menez) where he tries to patch shit up while cashing in as a horror movie star.

While butchered to shit and back upon it’s U.S. release (which is included here on a separate disc… that’s the fifth disc if you are keeping score at home… and you aren’t) where it was cut (unsuccessfully) into a zany comedy, the film in its original state is more of a stylish, horror dramedy and is a real highlight of this set!

This disc brings the special features as well with the director’s cut featuring audio commentaries with  Rigby and Lyons, as well as author Kat Ellinger, interviews with Menez, Lee (archival) and director Édouard Molinaro, a chat with filmmaker Patrice Leconte on relationship with author Claude Klotz, who wrote the novel Paris Vampire, upon which this film was based, an archival interview with Klotz, and the film’s trailer.

Moving on to disc seven we have 1988’s Murder Story:

Lee stars as ace crime writer Willard Hope who serves as a mentor to one Tony Zonis (Alexis Denisof whom a lot of you will remember from both Buffy and Angel) who has a wild hair up his ass about writing the fuckin’ ultimate thriller novel. To that end, the dynamite duo scans the headlines lookin’ for some juicy-ass inspiration. Naturally they find a completely out of control international scandal involving (but not limited to) murder which begins to seriously impact things comin’ up Zonis for much longer.

This one is a bit of a slow burn, but writer/directors Eddie Arno and Markus Innocenti bring their A game for the third act making the resulting picture a satisfying if uneven affair.

Special features here include an audio commentary courtesy of Arno and Innocenti, an interview with producer Tom Reeve (who also directed the Neil Marshall’s excellent 2002 werewolf flick Dog Soldiers), and the film’s trailer.

Also included here is a bonus feature film, the 1988 Swedish giallo-inspired Mask of Murder which is a passable thriller with a better cast than it may deserve including Lee (of course), Rod Taylor (1960’s H.G. Wells adaptation The Time Machine to name but one of many), and Valerie Perrine (Richard Donner’s 1978 superhero adaptation/masterpiece Superman as well as it’s direct sequel) and a plot revolving around a psychopath killing women up Canada way with Lee and company trying to solve the case.

While Murder Story features a spiffy new 4K transfer from the original master, Mask of Murder looks a bit worse for wear with it coming from “the best existing master”, which you will quickly realize wasn’t preserved as good as it should have been.

All the above comes in an attractive, solid box which also includes a spectacular, nearly 100-page book by Rigby that examines Lee’s career in the periods in which these films were produced and contains copious stills. A real knock-out!

Bottom line; The Eurocrypt of Christopher Lee: Collection 2 features a great variety of roles for the legend himself, is truly sumptuous, prime-cut Eurotrash cinema through and through, and worth every damn preternatural penny, and the presentation and included book are just ghoulish gravy on the whole delicious affair!