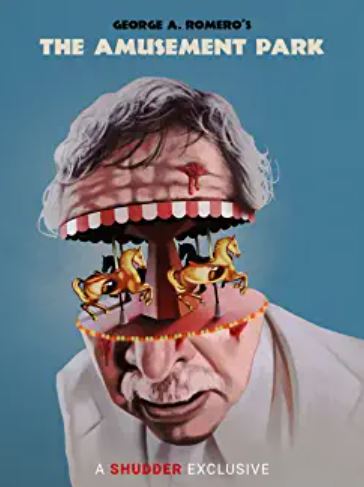 Next, a bloody and exhausted Maazel sits in a white room and speaks to a cheerful version of himself whom he warns not to leave the confines of the room. Mirthful Maazel ignores that edict post-fucking-haste and exits to a bustling amusement park where the elderly are preoccupied with pawning their belongings to enter the park.

Things get worse inside the gate as the young mill about and peck away at everything the elderly patrons own in ghoulish fashion leaving their victims with nothing… including their very existence!

Coming between his seminal walking dead masterpieces 1968’s Night of the Living Dead, and 1978’s Dawn of the Dead, George A. Romero’s The Amusement Park dips it’s toes into the aesthetic of those zombie infested waters while offering plenty of unique nightmare fuel of it’s own!

Set as it is in an amusement park operating in broad daylight, you’d think The Amusement Park would have a hard time conjuring it’s hair-raisin’ frights, but you’d be dead wrong!

Running a scant fifty four minutes, and being a socially conscious short subject meant to educate on the shoddy treatment the elderly were facing in 1970’s society (and nothing has improved my fiends), this film is nevertheless packed fat with shambling, near faceless beings… in this case the younger members of society who soullessly prey on their victims, which in this case could include Granny, Gramps, Uncle Ed, etc. While not his typical zombies per se, Romero’s presentation of anyone under the age of 60 in this thing are well and truly the same creatures at heart, with every bit of a ravenous appetite!

Adding to the fever dream atmosphere is the park itself with it’s candy cane colors (expertly echoed in the wardrobe choices made) that throws it’s sugary, cotton candy shit right in the faces of those society has discarded. It’s a truly terrifying location, and though it is an open-air environment, it becomes astoundingly claustrophobic thanks to some deft camera angles and the constant, ant like milling about of it’s inhabitants.

Also on point is the rock solid acting of Lincoln Maazel, who is both personable as well as projecting like an actor’s actor of the old school, and as an aside, bikers randomly show up here at some point as they’d do once again in the aforementioned Dawn of the Dead!

While the film itself is noticeably grainy and washed out (not surprising considering this was a “lost” film for decades and only existed on time battered 16MM prints), this adds to the overall vibe of the film as the image is unjustly fading away just like the old folks in the story proper.

As for special features on this Blu-ray release from Shudder and RLJE we are treated to: an upbeat audio commentary with Michael Gornick (who worked on sound and camera on the film) who provides a lively conversation filled to the beastly brim with anecdotes from the production, interviews with Suzanne Desrocher-Romero (George’s widow who was instrumental in getting this film released), script girl/actress Bonnie Hinzman (where she discuses her roles on the film as well as her husband, cinematographer/Romero zombie legend Bill Hinzman), and artist Ryan Carr (who is creating a graphic novel based on the film), an online panel interview discussing the film’s legacy, an advertising brochure for the film, the original screenplay, and an image gallery.

Grim, nihilistic, and psychotronic, Romero’s The Amusement Park is a unique experience both unsettling and infinitely odd and shouldn’t be missed by aficionados of the master’s works, as well as those that crave off-beat cinema!