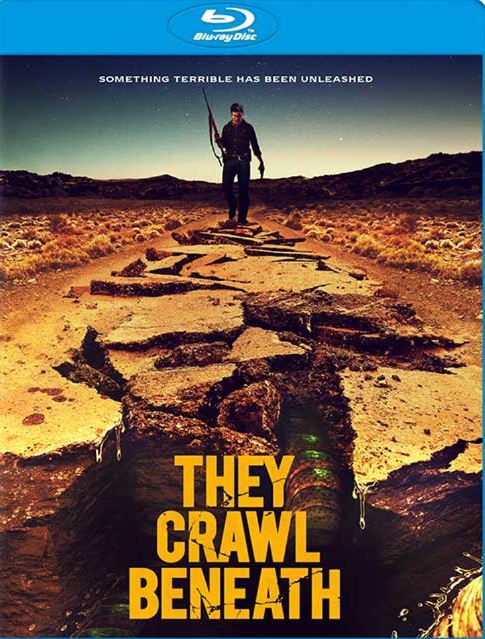 Danny (Joseph Almani) is a policeman that spends most of his time poundin’ beers and workin’ on muscle cars with his grizzled uncle, Bill (the legendary Michael Paré of Eddie and the Cruisers and Streets of Fire)… when he isn’t busy having horrendous, monster-filled nightmares or fucking up his relationship with his girlfriend Gwen (Karlee Eldridge) six ways to Sunday.

Fate however has more in store for Danny as an earthquake rocks the small desert town he calls home… an earthquake that releases toxic slugs that really take a shine to biting the townsfolk willy-nilly… including easy-breezy Bill!

Anyhow, one additional quake later and Danny finds himself trapped under a muscle car with a very dead Bill and a very alive, and very toothy, mutated slug… which soon puts the bite on our hero which makes his already questionable chances of survival dip even lower!

Will Danny be able to fend off those wicked worms and the haunting hallucinations their bite results in to see another day?!!

Now I know what you are thinking… mutant worms… desert… this shit sounds a lot like mother fuckin’ Tremors, and that’s understandable, but the two films have nothing in common except for the basic themes, and while Tremors is a fun throwback romp to creature features of the late 1950’s/early 1960’s, director Dale Fabrigar’s (working from a tight screenplay from Tricia Aurand) They Crawl Beneath is a surprisingly heartfelt, rather low-key affair that has more in common witht he more character based, natur-run-amok features of the mid 1970’s.

Consisting of one major location, and featuring a small, yet excellent, cast; They Crawl Beneath is a text book example of exactly what to do when your budget is lower than the Hollywood norm; keep the cast small, the locations few, and the special effects limited and cheap… but that last point is blown out of the water thanks to a talented special effects crew that wisely went for beautifully practical approach to the film’s bodacious beasties instead of noxious CGI (I don’t bitch about much, but my love for tangible effects is well-known and documented… )… a job well done indeed!

Speaking of “well done”, the chemistry between Almani and Paré is fantastic, and the former goes from lovelorn sap to underdog hero with ease and generates plenty of audience sympathy along the way, while Paré provides an incredible amount of emotion and complexity to his role. A really amazing turn of acting all around!

another big plus here is the suspense that builds as our hero remains trapped by a falling car as the hallucinations begin and the worms attack. It’s a great, claustrophobic set-piece that ramps the tension and keeps the audience on edge throughout!

Less special are the special features present here, with the film’s trailer being the only offering… but bells and whistles are just gravy when the feature presentation is as strong as it is here.

To put a beastly bow on it; They Crawl Beneath is an emotional, character-driven call back to the environmentally conscious fright flicks of the sinister ’70s and really shouldn’t be missed by fans of the same!