Things To Consider Before Shooting Your Own Movie This article explores some of the steps needed to start shooting your own movie with a small budget and limited resources.

How to start shooting your own movie

Independent films, or “indie films” as they are known, are a good starting point for novice filmmakers. By its very nature, independent filmmaking is a more hands-on affair. It means that a filmmaker has more creative freedom to express the way in which they want to tell a story simply because they are not answerable to big Hollywood studios or major financial backers. However, besides shooting your own movie, there are other ways to gain access to the film business if you’re just starting out. For example, you could start by going to a film school, enrolling in an online filmmaking course, or applying for one of the film production internship jobs available.

Nevertheless, if your heart is set on shooting your own movie, and even if you only have a small budget to work with, you can still create something amazing. To that end, we have teamed up with experts from job aggregator Jooble to take a closer look at what it takes to shoot your own movie.

Shooting your own movie with a small budget

A limited budget is probably the number one obstacle that aspiring indie filmmakers are faced with. However, the restrictions of a low budget often nurture creativity and innovation. Furthermore, sometimes small-budget productions can outperform even the biggest blockbuster movies that cost hundreds of millions of dollars to make. For example, the movie Paranormal Activity was filmed with a budget of a mere $15,000 and grossed $193,355,800 at the box office! Not a bad return on a low investment! Another example is the movie El Mariachi with a ridiculously low budget of $7,000 that ultimately grossed $2,041,928. And perhaps the most well-known low-budget movie of all time is The Blair Witch Project. With a budget of $60,000, it racked up an impressive $248,639,099 at the box office!

Shooting a short movie may be the best – and cheapest – route to take if you’re just starting out. It can be an excellent way to practice and hone your filmmaking skills. Short movies can be made in any style or genre (e.g., horror, comedy, documentary, thriller, etc.). Keep in mind that the length of the film must be under 15 minutes in order to be submitted as a short one to film festivals.

Shooting an indie movie is a do-it-yourself endeavor. Unlike big Hollywood productions, you don’t have the resources and support of a big movie studio to fall back on. Therefore, every aspect of making the film is down to you and your small crew.

In order to produce an independent film, there are several fundamental steps you need to cover:

Learn more about each of these steps below.

All movies begin with a script. Make sure that the storyline can be executed on a shoestring budget. For instance, a science fiction movie that demands special effects and elaborate sets is not a good idea for a low-budget indie movie. When reviewing the script, pay close attention to the genre, cast size, and locations needed.

Calculate the cost of the production. Your cast, crew, equipment, locations, and post-production will all depend on the size of your budget. Even if you’re the writer, director, and star, you’ll still need to enlist the aid of a few moderately experienced individuals to collaborate with you.

If you’re in charge of the direction – especially if it’s your first time – it may be a good idea to hire a seasoned cinematographer. The production value (the visual quality of the film) can be increased by having a professional who is familiar with the camera, lighting, and other technical aspects of your shoot. 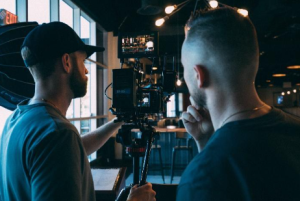 Actors currently receive $125 a day as per the SAG-AFTRA low-budget requirements. It may not sound like a lot, but these expenses can soon add up if filming takes place over many days. And remember the bigger your cast, the bigger your expenses.

You’ll need to create a production plan that includes your shot list, scene layouts, prop requirements, locations, and any other details you’ll need during filming.

Editing is one of the most vital aspects of filmmaking. An average movie can be transformed into a great movie thanks to post-production editing. Try to hire a professional editor for this crucial stage unless you feel confident enough to do the editing yourself.

Once you’re satisfied with the end product, it’s time to show off your masterpiece to the public. You can do this by submitting your move to a number of film festivals. Film festivals can assist in finding a distributor for your movie and are also useful for meeting people in the film industry.