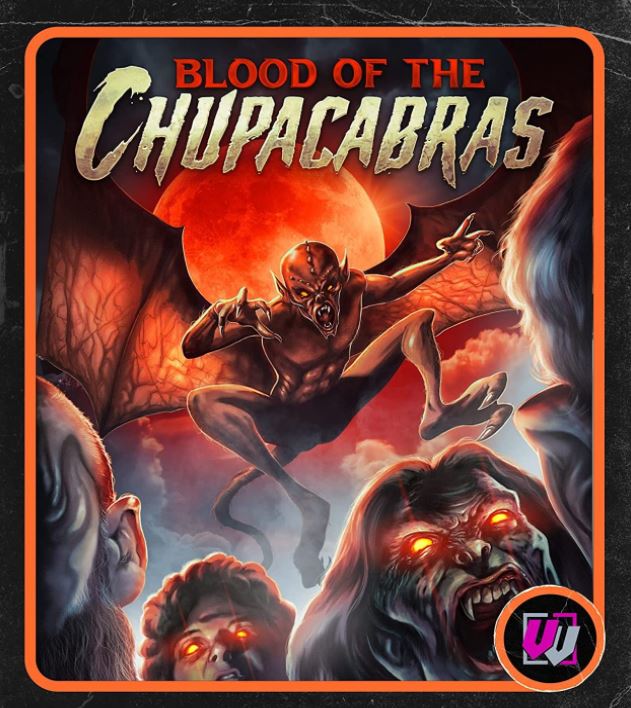 Plucky newspaperwoman Sandra (Elaine Benoit) works in an office of complete assholes who continuously ride her ass about the weak-as-fuck assignments the News Editor… a.k.a. her husband… doles out to her. Also the office scene is scored with the fartiest of electronic horn music your ass has ever heard… trust me, it’s a highlight… and it inexplicably shows up in the finale as well…

One night Sandra gets a lucky break when her hubs assigns her to investigate a report of a local cryptid sighting of the famed goat-sucking Chupacabra which then turns to a homicide investigation across town… probably unrelated.

As the attacks continue, Sandra seeks the advice of local Romany mystic The Mago (Lenore Sebastian), who you’d think would be more an expert in werewolves or vampires rather than Puerto Rican/Mexican cryptids, but she’s an infodump waiting to happen… she also recommends finding the local vampire hunter, one Granpa Charles Parker (Loren Taylor) by name, which is definitely more on-brand.

It’s sage advice too, as the Chupacabras (“s” intentional as per the film’s title) victims seem to become straight up fang bangers and before long reporters, mystics, the military, and some financially strapped apartment dwellers join forces as only they can to combat the murderous monster and his thirsty children!

Blood of the Chupacabras is an odd one in the pantheon of (in this case mostly) S.O.V. horror. It has a large cast, multiple storylines, competent (and in a few instances beautiful) shot compositions…  hell writer/director Jonathan Mumm even had access to an actual military vehicle… so rather heady stuff for the genre, but at the same time it looks like a S.O.V. production (save for a few sequences shot in 16mm for some reason)… it’s a weird and pretty wonderful thing to witness… it’s like gold star level D.I.Y. horror; crude but with a bigger vision than most films of it’s kind… a vision they realized.

My one complaint with Blood of the Chupacabras is that the titular beast has very little screen-time. What glimpses we do get showed a lot of creativity and promise and I would have liked to see more the damn thing… speaking of which, the victims of the Chupacabras turning into vampires; fuckin’ A+ on that one!

Ku-fucking-dos as well to the special features on this Blu-ray release from Visual Vengeance which kick off with an audio commentary featuring Mumm and actor Hugh McChord that takes us through the film’s production, and it’s a fascinating listen on what it took to bring the micro-budget feature to lurid life!

Following that we get a blooper reel (which shows how fun a set it was during production), footage from The New York International Film and Video Festival (from around the time of the film’s premier), a featurette on the film’s effects (and some effects sequences that could have been), a segment on trivia associated with the film, more premier footage (this time from the Crest Theater in Sacramento, CA), the Visual Vengeance trailer for the film, and a second feature film…

Detective Steve Andrews (Bruce Shaw) is balls deep into finding the whereabouts of missing co-ed Laurie Reynolds (Megan Welch) who was abducted from the beach by two dudes with a honkin’ strange-ass gun.

Meanwhile, ol’ Granpa Charles (a returning Taylor) is spinnin’ his wheels in the local insane asylum run by shady bastard extraordinaire Dr. Randolph (Hugh McChord, who was in the first film as well, albeit as a different character), but he starts spoutin’ his ol’ vampire shit again, and he seems to know something about Laurie as well… unfortunately he pulls a Copperfield and up and vanishes before Andrews can play a game of ’20 Questions’ with him.

Anyhow, the kidnappers are kinda stupid as fuck, and their victim begins to outwit them… but the Chupacabras is stalking the land making everyone’s survival increasingly unsure!

Just as ambitious as it’s predecessor, Revenge of the Chupacabras features many hold-overs from the first installment including; some solid cinematography, a game cast, and an ass-load of plotlines (including a kidnapping plot, the goings-on of a crooked insane asylum staff, not to mention the monster biz)… not to mention that same glorious drive-in creature feature of years gone by aesthetic that makes this series endearing.

There are differences here as well. For one, their is no military hardware present (hey, it was impressive in the first go-around), and most importantly there is waaaay more creature action on screen in ‘part 2′!

And about that beastie… normally I’m not a huge CG monster fan, but dammit, the creature here is just so freakin’ charming (in a crude-as-hell Playstation one way), I can’t help but love him!

Speaking of “love” you can learn just how much this picture was a labor of love thanks to some fascinating special features which just so happen to proceed with another audio commentary courtesy of Mumm who takes us through the film’s production in detail.

Following that we get an archival “making of” featurette, a look at the film’s digital effects (created by a returning Rob Neep), a blooper reel, a Q&A with cast and crew from the film’s premier in 2005, a mid-’70s western themed promo video directed by Mumm, and the film’s Visual Vengeance trailer.

High-reaching, earnest, and full of charm, the two Chupacabras flicks contained on this Blu are neo-drive-in creature-feature action done right, and shouldn’t be missed by lovers of home-made horror as well as fans of 1950’s-era sci-fi shockers!

← Prev: Watch The Bodies Hit The Floor In 'Bodies Bodies Bodies' Out Today! Next: Aaron Moorhead and Justin Benson's 'Something In The Dirt' Digs Up New Trailer & Poster →