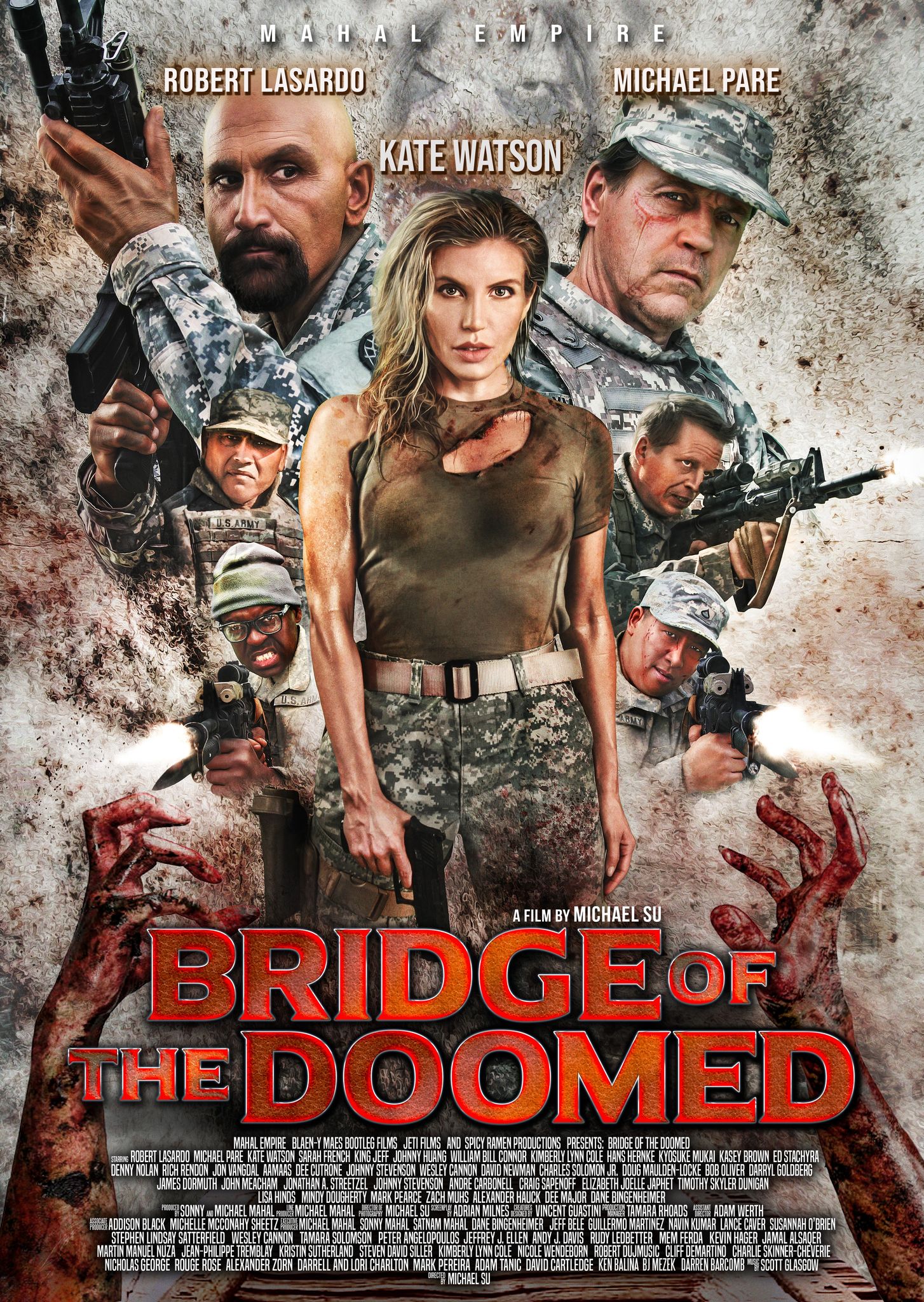 Bridge of the Doomed starts things off right with some straight up, red-blooded mother fuckin’ action (which differs from regular “action” by one “mother fuckin’”s worth, which trust me is a considerable amount)  with zombies rippin’ an army base a new one!

After that frightful fracas, ol’ General Vasquez (the always great Robert LaSardo) gathers up Lt. Whitmore (Dane Bingenheimer) and Sgt. Hernandez (Kate Watson) and charges them and their troops with the task of defending a nearby bridge until reinforcements arrive.

Soon our heroes are squaring off against hostile human survivors of the outbreak and the ever advancing shambling dead… but what lurks under that beastly bridge may be the biggest danger of them all!

I’ll tell you one thing, director Michael Su (Death Count) and screenwriter Adrian Milnes (Night of the Tommyknockers) make double damn sure that Bridge of the Doomed is never, ever boring… this picture is filled to the brutal brim with all manner of action, bloodshed, and creature feature shenanigans jammed into a lean eighty minute runtime, and it moves like lurid lightning!

Speaking of bloodshed and creatures, there is a multitude of impressive gore effects and creature make-ups/suits on display here, with CG being kept to mainly environmental enhancements and muzzle flashes, and it put a big ol’ rictus grin on my frightful face for damn sure, and these fine folks deserve all the praise in the world for giving horror hounds exactly what they crave!

The cast here is incredibly strong too, with solid appearances from genre vets LaSardo and Michael Paré in a cameo as the delightfully named Colonel Charon… and if you don’t get the reference you should read a book… or do a Google search… we both know you’re not going to touch a book…

If there is any negative here, it’s that we don’t get a ton of character development… but this is supposed to be a balls-to-the-wall action spooktacular not My Dinner with fuckin’ Andre, so take all that for what it’s worth.

Bridge of the Doomed is one hell of a good time and shouldn’t be missed by fans of the gut-munching genre; it’s fast-paced, drenched in gore, and locked and loaded with plenty of monster mayhem… a ghoulishly good time indeed!

Bridge of the Doomed will be available November 4th on VOD, Blu-ray, and DVD through Gravitas Ventures.

← Prev: You'll Be Able To Watch Your Favorite Shows Everywhere You Go With These Tricks Next: Game Review: 'Saturnalia' →