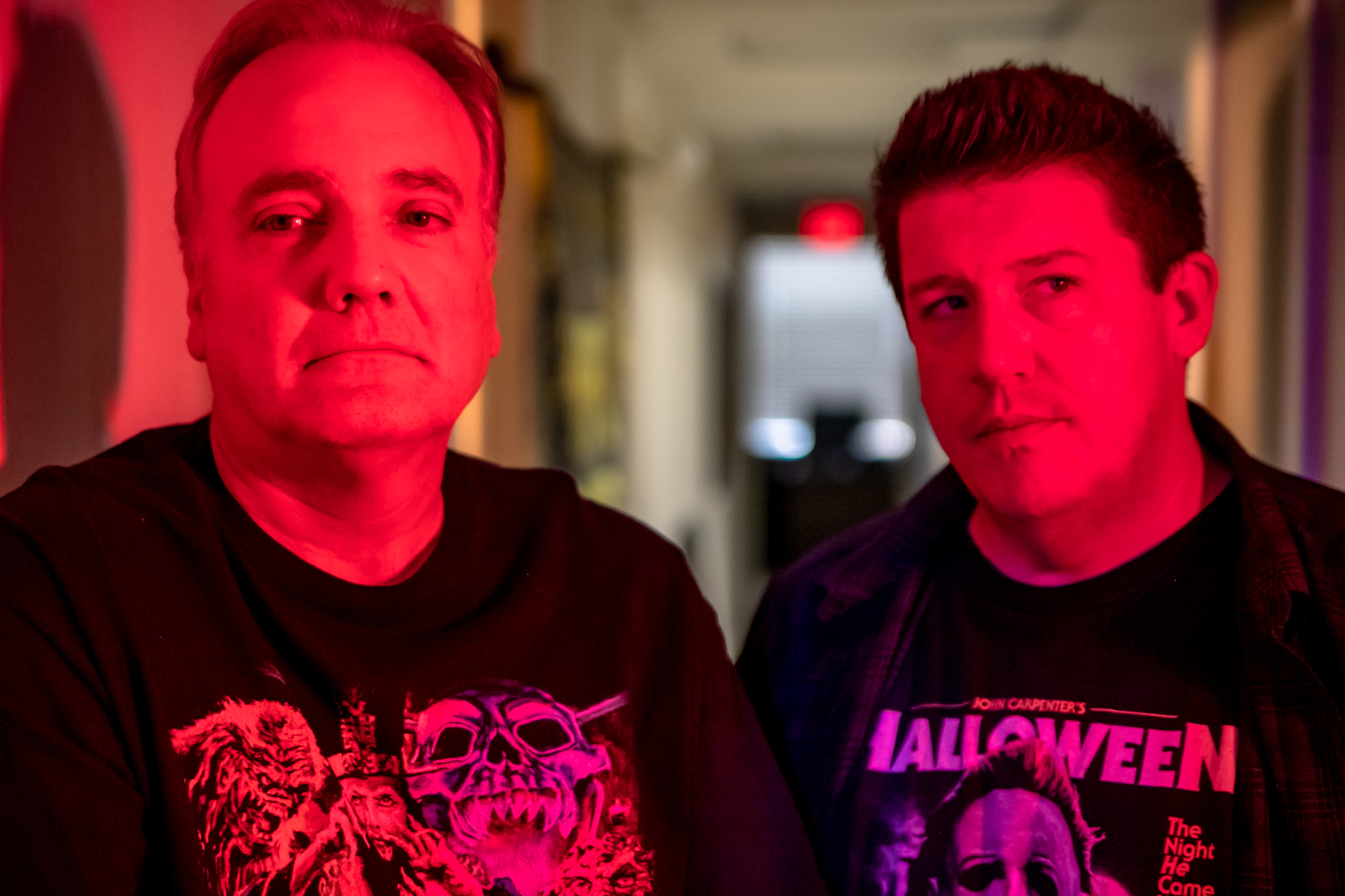 From Blood Moon Pictures comes a new tale of holiday horror, New Fears Eve, the follow-up to their Christmas horror anthology 13 Slays Till X-Mas which is now out on Amazon Prime and Tubi as well as on DVD.

In New Fears Eve, “As the coming year approaches three best friends reluctantly prepare for Hooper Industries’ annual New Year’s Eve bash. The clock ticks down and the body count rises as a psychotic murderer known as The Doctor is on the loose. This sadistic surgeon of death leaves Owensboro covered in blood as local police and FBI are forced to navigate through a maze of bodies left in his wake. Unbeknownst to the three best friends their mandatory party is about to turn deadly when the killer sets his sights on them. December 31st becomes a party to die for when Leslie, Brian, Moses, and their colleagues are trapped inside an inescapable building with a bloodthirsty madman hell-bent on carving his way to midnight.”

I spoke with writer-director-producers and owners of Blood Moon Pictures, PJ Starks and Eric Huskisson about the movie which has now been fully funded thanks to the Indiegogo campaign and has now entered its stretch goal phase.

P.J.: Yes. We’ve technically reached our first goal which means the campaign will go “InDemand” and we can continue to raise more for budgetary needs. This is the largest campaign we’ve ever run. What most people don’t know is we only put a portion of our actual budget on the campaign. In some respects, it was due to fear we wouldn’t raise the money we needed, and we’d have another Devil’s Knight: VOB 3 on our hands. Nevertheless, the support we’ve gotten from this project has been tremendous. We can’t thank all the supporters and contributors enough for getting behind this new film. We still have additional funds to raise and feel good about where things are headed.

Kelli: “What is the importance of stretch goals?

P.J.: “Stretch goals are important because there are almost always additional funds that need to be raised. We’re in a similar situation right now because we didn’t want to put our entire budget on Indiegogo. We have a slew of things that we require funds for beyond the $30K and while it isn’t a lot more, it’s still important enough that it needs to be raised so we can make this film as big and as bad as it needs to be.

Kelli: “That is importnant. If you will tell us about the movie?”

P.J.: “It revolves around three best friends who work for this small company that is essentially being forced to attend a mandatory New Years Eve office party. Unbeknownst to them, they’re being stalked by this sadistic killer known as The Doctor who inevitably follows them to the party. Of course, they get locked in overnight and things quickly turn into a blood bath.”

Kelli: “Who is involved?”

Eric: “As of right now we have horror celebrities Hannah Fierman, Felissa Rose, L.C. Holt, and Dave Sheridan is also serving as a producer. We have another known name in horror attached but we can’t announce him just yet. The rest of the cast is local or from the region. Lily Claire Harvey, Matthew Tichenor and Turner Vaughn are newcomers who are taking on the lead roles.”

P.J.: “Not yet. We won’t begin filming until next year, however, we did film a proof-of-concept trailer to give everyone a basic idea of what to expect.”

Kelli: “Is there a release date set?

Eric: “Right now, our projected date is sometime in December of 2023. Hopefully, that doesn’t change. What sets New Fears Eve apart from other films in this sub-genre? It’s the first single narrative feature we’ve made since we started making films as a company.”

P.J.: Other slasher films take place around this time of year, but several key elements set the film apart from those classic body-count pictures. The first is our killer. Up till now, no one has tackled the plague doctor as they look for a masked murderer and I’m excited to be at the forefront of that. That alone is what motive. Dave wants to be part of the film. When we designed his look, I wanted it to be a hybrid of said plague doctor mixed with Jack the Ripper. Especially regarding his silhouette. Jack has a very iconic lineation. It becomes something new but also familiar for fans of true crime and slasher films. The other is the script. There’s blood and gore, it’s a slasher
movie. But when I wrote the script, I pulled a lot from my personal life over the past couple of years. It became a cathartic endeavor where I tackled my divorce, the shift in dynamics with certain relationships, unrelenting change, the fear of the unknown, and ultimately new beginnings all mixed with a healthy dose of humor. Everyone who’s read the script has loved it because it’s not your typical slice and dice or whodunit.”

Kelli: “With your two most recent films being holiday horrors, is it a coincidence or will the next movie be a holiday horror film too?”

P.J.: Kind of both really. It’s definitely a holiday-themed film, but our intentions weren’t necessarily to make a film about New Years Eve. I was driving one day and just came up with the title New Fears Eve. I thought, “that’s kind of a cool name.” Then came up with the concept from there. I’m always pitching ideas to Eric, this particular one really jumped out at him, and he thought it would be a great next direction. Especially considering we wanted our next project to be a single narrative versus an anthology.”

Eric: Volumes of Blood: Horror Stories was an anthology based on several different holidays as well. I think it’s a coincidence that 13 Slays Till X-Mas was made after VOB:HS but New Fears Eve is not. We had such great success with 13 Slays we had discussed making a movie based on the next holiday. P.J. had already pitched me the idea for NFE so it seemed like the right script to bring to the screen next! We have several ideas for future films and are presently almost finished with the writing of another anthology feature that won’t be holiday based.

You heard it guys, New Fears Eve is definitely a movie you want to be part of. The campaign currently has some killer perks including bundles, autographed items, you can get your photo in the film, there are walk-on roles, and more! Head over to Indiegogo and get a perk while you can!

Stay up to date by following Blood Moon Pictures on Facebook and Twitter. Also, be sure to check out 13 Slays Till X-Mas now on Prime Video, Tubi, and on DVD. 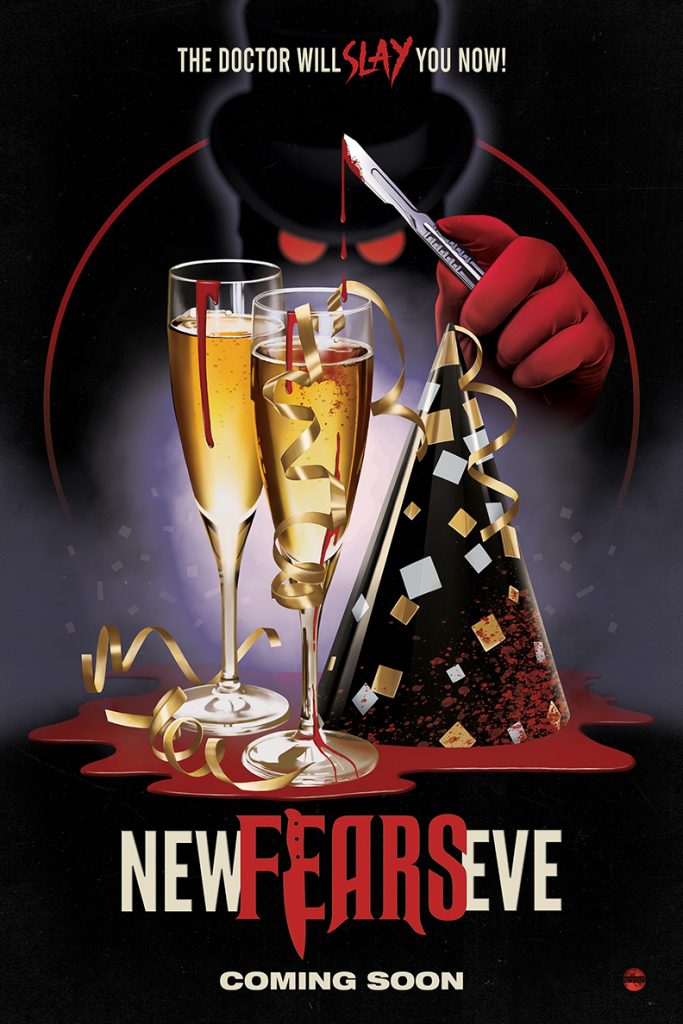 ← Prev: How to Make Your True Crime YouTube Channel Successful? Tips for those who started in 2022 Next: 'Bendy and the Dark Revival' Debuts New Trailer and Launch Date →