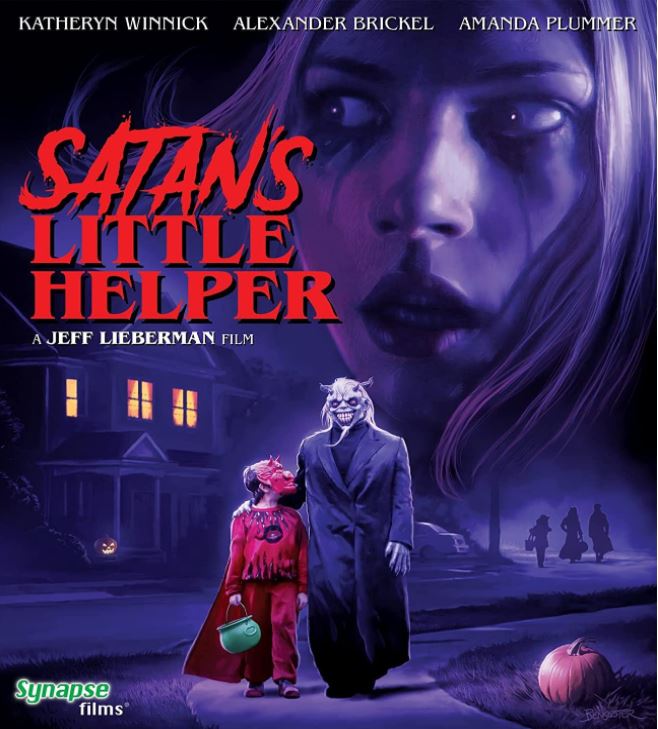 Lil’ Dougie (Alexander Brickel) loves two things; Satan (thanks to the eponymous video game he constantly plays which features ol’ Scratch) and his gorgeous sister Jenna (Katheryn Winnick)… and neither in a particularly healthy way.

Now since Doug hearts Jenna so damn much that when she comes home from college to visit for Halloween with her brand-spankin’ new boyfriend Alex (Stephen Graham) he gets more than a little perturbed… until he meets an ominous man dressed in a grinning devil mask (Joshua Annex) arranging dead bodies as All Hallow’s Eve decorations.

Naturally the little fool believes this rando psycho is the real deal come to life from his game, so he brings the murderous wine-guzzlin’, panty sniffin’, middle finger flippin’ monster home and hides him in the basement so he can kill ol’ Alex… and he does… eventually… and a whole mess of other people too!

The question is, will our lad Doug realize this isn’t all just a game before his family winds up extinct?

Satan’s Little Helper; the film that begs us to ask that age-old question: “How did that guy eat that chick out with a Halloween mask on?” The scholars shall remain baffled however as no answers are to be found here…

Now writer/director/legend Jeff Lieberman (Squirm, Blue Sunshine) has infused this stalk n’ slay gem with an enormous amount of laughs among the lacerations, and the humor in this one really hits the mark. A large reason why is the hilarious physical performance from Annex that really makes this fright flick such a devilish delight… and he brings so much mirth without uttering a single line of dialog.

Speaking (or not) of that, our killer has no backstory to match his lack of dialog, and that really benefits the flick too… the dude just kills to kill, end of story which makes him sinister as fuck… when he isn’t splittin’ sides with his Grade A schtick!

Add into the mix some solid performances from Brickel, Winnick, and the delightfully ever-on another planet stylings of Amanda Plummer (Pulp Fiction and many, many more) and some quality practical effects and you have one hell of a wicked winner cats n’ creeps!

And the freaky fun continues on past the last frame of the flick as we get some choice special features on this Blu-ray release from Synapse Films!

Things get underway with an informative audio commentary courtesy of Lieberman that takes us through the film’s production in detail, followed by an archival “behind-the-scenes” featurette, and an excellent retrospective/”making of”.

Following that we get a modern tour of the film’s locations (hosted by Lieberman in his usual honest and often hilarious fashion… plus there’s some rock solid filmmaking advice in here too!), and a promotional trailer.

Satan’s Little Helper is a beastly blast from start to finish and is guaranteed to put a smile on your face 666 miles wide!

← Prev: Director Of 'Winnie the Pooh: Blood and Honey' Is Taking Aim At Peter Pan Next Next: Netflix's 'A Tale Dark And Grimm' From Final Destination Creator Scores Emmy Nomination →