Writer/director Kang Dong Hun’s Contorted (South Korea, 2022) looks great and is well acted but its screenplay is weighed down with horror movie cliches. The film opens intriguingly with preteen girl HeeWoo (Kim BoMin) seeing a paranormal occurrence while at a funeral parlor with her father HyunMin (Kim MinJae). Meanwhile at their home, HeeWoo’s mother MyungHye (Seo YoungHee) contemplates suicide by jumping off of the balcony of their apartment. Her very young daughter JiWoo (Noh HaYeon) prevents her from doing so, but then a horrible act takes place.

MyungHye suffers from mental health issues while HyunMin, unemployed and unsuccessful in finding new work because of a plagiarism scandal, takes a passive stance while trying to keep appearances as normal as possible. Young teen son DongWoo (Oh JaHun) is emotionally checked out of the family. As increasingly bizarre and upsetting occurrences take place in the new home into which they have just moved because of financial difficulties, and inside a shed located on the property, the family fights inner demons and supernatural forces. Without wanting to give too much away, riffs on The Shining and some classic Korean ghost films are at play.

Contorted is by no means a bad film — its technical aspects are all of strong quality, the main cast members give good performances, and Kang’s direction is solid. The screenplay, though, has issues: a repeating cycle of jump scares and “Oh, it was just a nightmare or vision” scenes, protagonists with whom it is difficult to side, a top-of-the-third-act exposition dump from a new character who reveals a common scare-fare cliche regarding families who move into new homes, and no less than three horror movie tropes in the third act. Also, there’s ambiguity, and then there is laying groundwork that adopted children have something to do with the mysterious circumstances and then never explaining why further. Viewers new to the horror genre will likely get more enjoyment out of Contorted than seasoned fear-fare aficionados. Kang has a flair for ratcheting up tension and dread, though, so he is a directorial talent on whom to keep an eye. 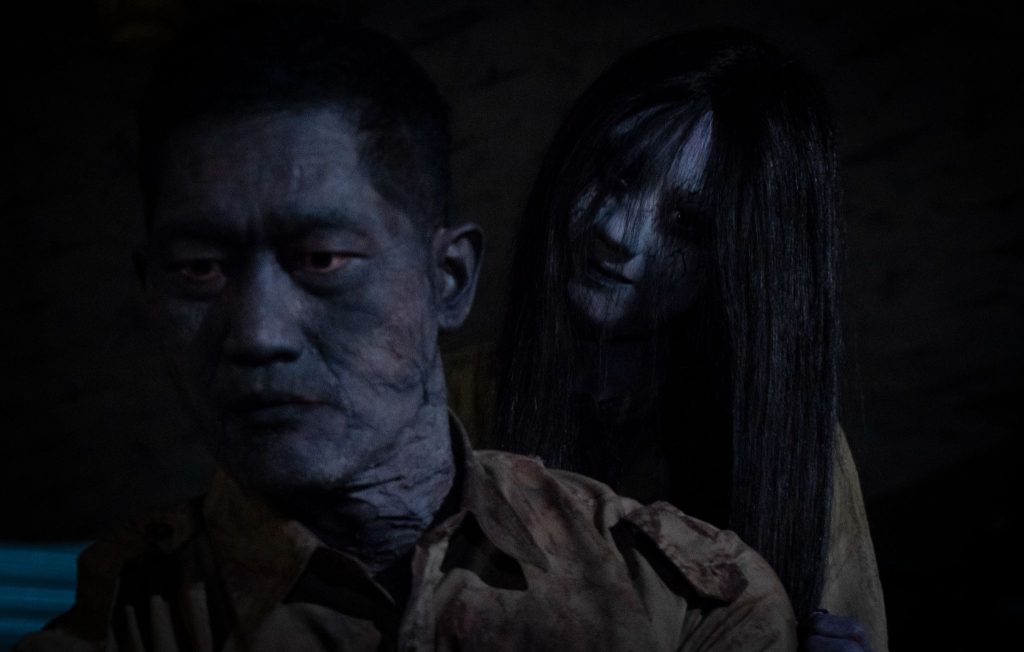 Combining the feelings of a walkthrough horror video game and faux-livestream haunted house movie (the latter along the lines of Deadstream or #chadgetstheaxe), director Sim DeokGeun’s Guimoon: The Lightless Door finds Kim KangWoo starring as the son of a shaman who seemingly killed herself outside of a community center that is now abandoned and falling to ruin. The son goes inside a few years later to solve the mystery of her death in hopes of freeing her soul. Also inside the building are three university students hoping to film something paranormal in hopes of winning a contest that would give them enough money to pay their tuition. Guimoon: The Lightless Door offers little in the way of originality other than throwing in a wrinkle that I won’t spoil here except to say that it is one usually found in science fiction movies. This one is all loud noises and other jump scare attempts meant to startle while characters roam around a dimly lit, reputedly haunted space with some of them disrespecting the place and therefore the evil spirits inside. What’s around the next corner? Likely exactly what you would expect, with the film’s big twist serving up a reveal that has been done numerous times before. Solid performances and a nice display of suspense building from Sim are the main reasons to seek out Guimoon: The Lightless Door, which is recommended mainly for Asian-horror completists.