This issue is the final book in Volume One of the Grimm Tales of Terror series. The issue is entitled “Dead Girl Walking”. The book opens with Keres the Goddess of Death posing as a bartender at the Roosevelt Hotel in Los Angeles. The murderously macabre vixen has set her sights set on an older man at the bar. The older man at the bar has been wolfishly eyeing an obviously younger women from afar. It is evident that his intentions are not pure as he slips off his wedding ring and asks the bartender to make him a drink. She mixes his drink and warns him that he should be careful when meeting new people because you can’t always tell what they’re like from looking at them. She then offers to tell him a tale while she pours him the shots he requested.He would do well to take her words to heart. It is also ironic because the reader knows that the redheaded beauty isn’t a mere bartender but the mistress of ceremonies of a more sinister plot. I would recommend this comic to anyone who is a fan of horror, gore, ghastly or eerie stories, and cheesecake art. With that being said go pick up this title, or if you want to know more about what happens, continue to read on. (*spoilers alert*)

Keres begins to recount a narrative about a man just like him that once sat in that very bar. The man sat in a booth eating his food when in walked an attractive woman in a revealingly short low-cut dress. The woman asked if the seat across from him at the table was taken and then sits when he states that he is alone. She asks if he is there for the convention in town as she orders a drink from a familiar looking waitress. The man states that he is indeed there for the convention but wonders about why she is there, let alone sitting with him. She tells him that she is not there for the convention and this perplexes him.  She puts his fears to rest as she insists that she isn’t there for work, implying she isn’t a prostitute, but rather she is there celebrating a recent divorce.

Some time later, the woman invites the man to her room for what he thinks will be a night to remember. The woman asks him to fix the two of them a drink as she goes to the restroom. She returns having stripped down to just the bare essentials. The temptress then seductively beckons for him to come over for a kiss. She is shown holding a tranquilizer gun behind her back. It then all goes black for him until he wakes up in excruciating pain soaking in a tub full of ice. The only memento he got from his time with her is a scar on his flank where his kidney once was. It turns out that the sexy siren wasn’t at all what she appeared to be and this will be a night he won’t forget, although not for the reasons he wanted.

Part two of the tale picks up with the seductress, now known to the reader as Sandra Belle, meeting with a shady character by the name of Mr. Thomas Carboni. It seems Sandra works for Mr. Carboni harvesting organs from unsuspecting marks who then sells them to the highest bidder on the black market. She isn’t satisfied with the amount of money she made from her latest misdeed and wants in on something big. Something big enough to retire, as she is growing weary of the risk involved and wants out. She persuades him by telling Tommy she can make it worth his while by offering up other services.

A few weeks later, while living it up in Jamaica, she gets the call from Tommy who has word of a substantial score, if she is up for the job. Tommy has offered her one million dollars because this isn’t an ordinary job. Tommy is trying to relate the details of this dangerous job to her but she silences him and won’t let him finish cautioning her. She jumps at what she believes is the opportunity of a lifetime and won’t take no for an answer. He reluctantly agrees and sends her the information.

The story then continues as we see her in Miami trailing the target of her next transgression. She soon realizes the reason for Tommy’s concern as this businessman is built like a Mack truck. She feels like getting cold feet but brushes off the feeling and talks herself through it. She thinks she can still pull it off by taking extra precautionary measures. We then see Tommy talking on the phone to a Mr. Hiroshi telling him that everything has been arranged. Mr. Hiroshi demands that the specimens be perfect and Tommy assures him that they’re the finest he will ever see.

We are then shown Sandra and her mark entering a hotel room. He tells her that he isn’t feeling well and he goes to the restroom. It seems that Sandra has done it again. Except, we see the supposed dupe smiling through the crack of the door as she passes out on the floor. She awakens and finds herself in a tub full of ice with both of her arms and legs amputated. She looks around the room and notices a bag containing her money sitting on the toilet seat. Somewhere in Japan, Mr. Hiroshi calls Thomas to thank him for his services. Mr. Hiroshi is pleased with the state of the specimens as we see him smile while admiring her appendages on a trophy wall that is covered in other oddities.  It turns out that her victim wasn’t what he appeared to be and she is retired from the business after all, although not for the reasons she wanted.

(*trigger warnings*) The third and final chapter of this tale brings us full circle and we see the older man talking to the younger woman he was lusting after earlier. She is noticeably intoxicated and he asks her to go to his room. He turns to our bartender with the crimson colored hair and asks her to send up some chilled champagne. She insists that she will bring it up herself. She arrives at the door with champagne in hand before the older man even gets to his room. He remarks about how quickly she was able to respond before ordering her to place it on the table and get out. Keres places it on the table and leaves but not before knocking some of the ice cubes out of the bucket and onto the floor and leaving the door ajar.

The man is leaning over top of the young woman forcibly undressing her as she tells him no and that she has made a mistake. She also reveals to the older man that she is only sixteen and shouldn’t be doing this.  The man states that he knows she is really younger than she appears as he has been stalking her. He reveals that he has watched her leave school every day for a month and that he knows that the bouncer has been sneaking her in. He gets up and slams the door shut and starts to walk over to her on the bed while telling her that even if she likes to play at being older that he really likes young girls and is going to enjoy it. The pedophile then gets his just deserts as he slips on the ice cubes and falls onto one of the girls stiletto heels he had just previously thrown to the floor, impaling himself through the eye. He lays there, bleeding out. It turns out the red-haired barmaid wasn’t what she appeared to be and he got served just what he deserved, although not what he wanted.

Remember to be careful when meeting new people because you can’t always tell what they’re like from looking at them. Take heed of Keres’ warning, lest you become another twist ending to one of her cautionary tales. You may get what you are looking for, although it won’t be for the reasons you wanted, and you may just get what you deserve. Karma is a bitch and Keres will gladly serve it to you cold, with plenty of ice.

This suspenseful and chilling tale of terror was sensationally written by Ralph Tedesco and Joe Brusha. The artwork was magnificently done throughout by Ferran Sellares. The coloring was fancifully done by Marco Lesko with solid lettering done by Fabio Amelia.

Even though this modern telling of an urban legend warns you not to judge a book by it’s cover, I think you should. Well, at least when it comes to the amazing artwork on the covers to this comic. The original 13A cover was done by Pasquale Qualano and Ylenia Dinapoli . Zenescope is also offering several variant covers of this issue with the 13B cover being done by Tina Valentino and Victor Bartlett. The 13C cover is a homage to EC Comics, of “Tales from the Crypt” fame, and was done by Eric J and Sean Ellery. There is also a hard to find 13D variant cover which is a Year 10 Photo Shoot Exclusive limited to just 350 by Michael Dooney and Ula Mos, which I could not find a picture of online. I personally got the 13B cover and am hoping to get the 13C cover as well.

This comic, the 13th issue of Zenescope’s horror anthology, debuted in stores on July 29th, 2015. The limited edition hardcover of Volume One of Grimm Tales of Terror will be in stores this coming October, just in time for Halloween. Also coming out for Halloween will be the next series of issues for this title, which will be the start of Volume Two. You can learn more on their website or at your local comic shop.  I recommend that you read this series. You never know, it may help you avoid Keres serving you more than just a drink, if you ever encounter her. 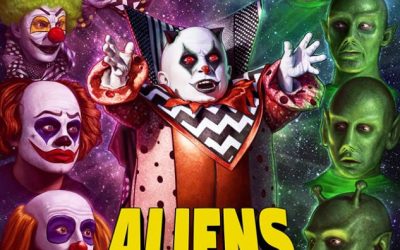 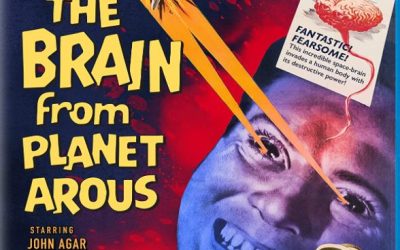 After some patented ’50s era wise-assin’ and a trek through the desert, Steve March (John Agar) becomes possessed by...