‘Salem’s Lot Sucks Like A Good Vampire Movie Should 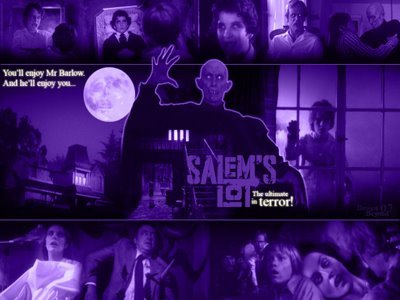 “Barlow! He’s a vampire! He must be destroyed!”  — David Soul, Salem’s Lot

That’s a line of dialogue from the cheesy and absolutely fun 1979 mini series, ‘Salem’s Lot. While it comes nowhere near the elegance and terror of the Stephen King novel, it totally avoids the cynicism and emptiness of the 2004 remake with Rob Lowe and Donald Sutherland. When you have vampires, especially scary vampires, why is there a need for sexual predator fathers and teachers? This was not a subject of the book, so why did the 2004 remake need to add this dimension? It’s like the Amityville Horror films (which none, and I mean ZERO are good horror films) you have all these ghosts, why does the house have to explode or someone chases someone with an axe or commit incest? Aren’t the ghosts scary enough? At least the original 1979 B movie gave us a puking a nun and a wonderful hamfisted performance from Rod Steiger. That’s all for another Cynema piece for after the holidays.

Why was illicit sex the centerpiece of this film? Is it sex that makes things dirty behind closed doors? A heroic doctor from King’s novel is now  a weak sex hound, banging an old friend and married mother of an abused baby. Why is Larry Crockett molesting his daughter?  Why has Matthew Burke been reduced to a gay, deviant stereotype. In the book, Burke’s intentions are noble, he is truly worried about Mike Ryerson. In the 2004 remake he has sexual designs on him. Why? Why the unnecessary scene of violence to a child with Ralphie Glick’s drowning?

‘Salem’s Lot 1979 was created as a CBS mini-series at a time when such television events were reserved for romances like The Thorn Birds, The Winds of War or spanning dramas like Roots or Holocaust. CBS took a risk in devoting two nights to a horror theme but Stephen King was on his way to being the greatest horror writer since ever and the suits at the Eye thought it was worth the risk. 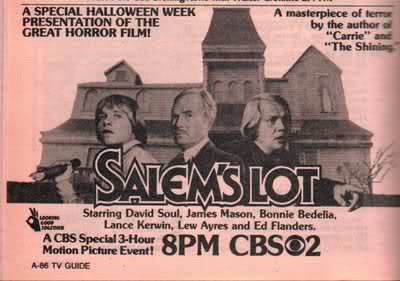 King’s novel is one of the finest examinations of the death of small town America with the exception of Peter Straub’s Ghost Story. The novel deftly handles a wide list of characters and weaves their stories into coherent and interesting plot lines. Both Salem’s Lot and Ghost Story are shining examples to new writers on how to handle large numbers of characters.  Salem’s Lot: The Movie is a quirky and mild adaptation of the book. Yet, it works. And you know what? The vampires are really vampires. This was a time before Abercrombie, Nair-chested sparkly vampires and werewolves hijacked the genre and turned horror into a wussfest.

Say what you will about ‘Salem’s Lot, the vampires are the real deal: nasty, blood thirsty and not looking like underwear models. 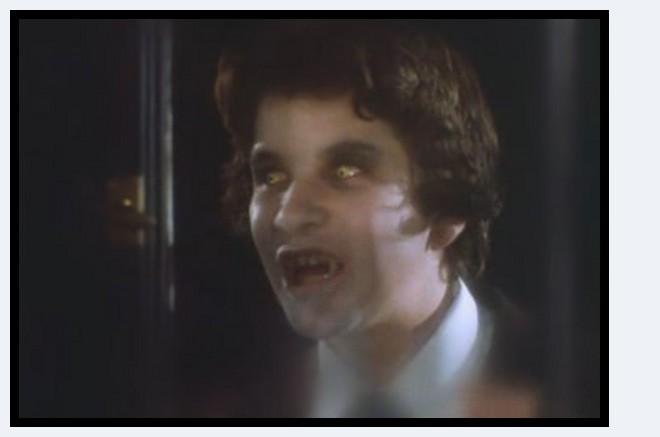 Is it straight up horror? There are some genuine creepy and solid moments. Director Tobe Hooper (of the original Texas Chainsaw fame) efficiently pilots the film through the rough seas of network television. Until pay cable came along, network TV was not a good place for original horror films. CBS was the same network that made the stupid move to broadcast The Exorcist. There is no point in showing that film on free TV. Once stripped of its vulgarity and demonic nightmarish context it is a neutered drama. The programming director who came up with the idea to air that film shoulda been fired.

This was a time before Abercrombie, Nair-chested sparkly vampires and werewolves hijacked the genre and turned horror into a wussfest.

So when CBS announced it was adapting Stephen King’s bestselling vampire novel into a two night mini-series, there were groans and low expectations. And some of them were well founded. Salem’s Lot is not a great horror film, but is one fun as hell ride. King has a warm sport for it and an admiration for Paul Monash’s streamlined script. The script handles the numerous characters of Jerusalem’s Lot and weaves them into a coherent and constantly advancing plot line. 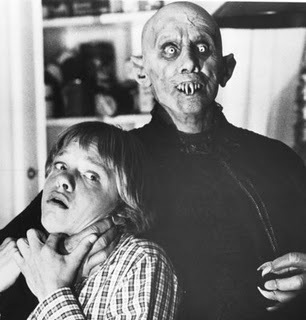 The problem is that the 1979 film strips the book of its important religious and sexual context.  Network TV is not the place for such things and these elements were sterilized and whitewashed. One of the best subplots of King’s novel was the story of sullied Father Callahan; a weak priest who lost his faith and his soul to the head vampire Barlow. In the televised version Callahan is reduced to a one scene cameo and nothing more. The 2004 remake decides to transform Callahan into a bad guy for some reason. It’s lazy writing and the filmmakers should have known better. It was a cynical move for the remake. 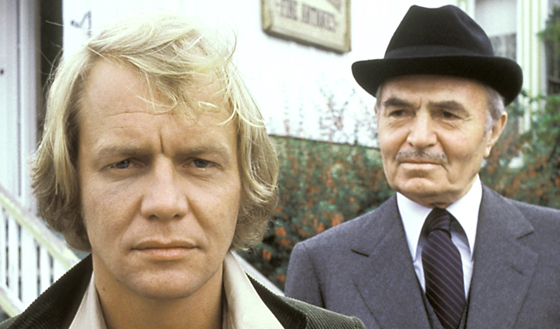 What works about ‘Salem’s Lot 1979 is its gung ho cast. Holy hell do we have a sweet menu of TV and film greats all together for this bash. David Soul (Yep, Starsky and Hutch and one hit wonder “Don’t Give Up On Us, Baby” David Soul) headlines with blonde feathered hair and really takes the role of writer Ben Mears seriously. This guy means business and he burns into every scene.

James Mason was an acting treasure but miscast as the day walking assistant, Straker. While the novel made him out to be a hulking man with cue ball shaved head and murder behind his eyes; CBS turned him into a preening, simpering gentleman suspected less of cavorting with vampires than being part of a homosexual couple. Of course no one out right says this because there are audiences that could be offended and censors to appease. Amazing though…it’s perfectly okay to watch vampires slaughter victims but don’t say “homosexual” in the same feature. Three’s Company was doing the heavy lifting on that one at the time. 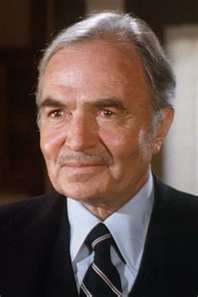 The great James Mason as Straker

What we do got are vampires. Lots of them. Some of the effects are quite good and haunting. The reliable character actor Geoffrey Lewis has a good cemetery scene where he feels compelled to unearth the body of Danny Glick only to find Danny awaiting his arrival. Lewis does a haunting turn as a vampire against the solid Van Helsing type Lew Ayres. Lewis’s “Look at me, teacher!” is still a show stopper. 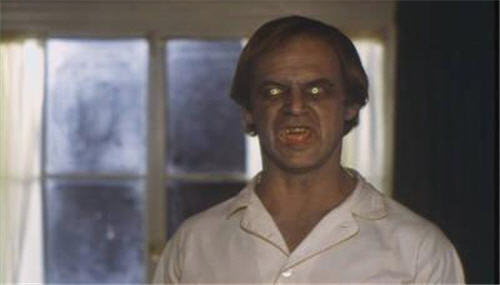 Ralphie Glick’s float through a bedroom window is a defining image in horror. Done through reverse, trick photography and a crane arm instead of wires; the effect still gives a better jolt than anything CGI can muster up today. 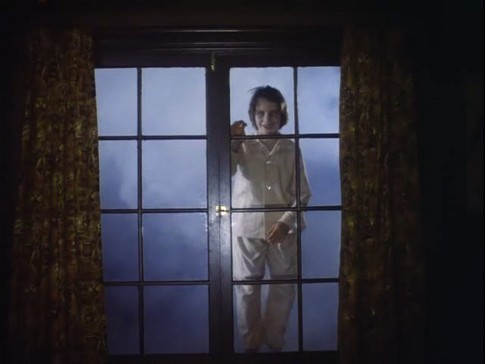 The real conundrum is Barlow, the lead vampire . The 2004 remake (and they still didn’t get it right) was more faithful to Barlow’s portrayal in the book. In King’s novel, Kort Barlow is a refined gentleman, an eloquent talker and master strategist. In the 1979 TV mini series he is reduced to a squealing, grunting Max Schreck from Nosferatu. Played by Reggie Nalder, the CBS Barlow is bluish with buck tooth incisor fangs and blazing yellow eyes. It works. By going so far to the other extreme the series made Barlow into a true monster and doesn’t mess around with trying to give him dialogue. James Mason takes up the chores and speaks for his master and provides the cool elegance that came through in the book. Barlow’s first appearance in the town jail is downright startling and his death at the hands of David Soul is one of the best vampire killings ever committed to film. 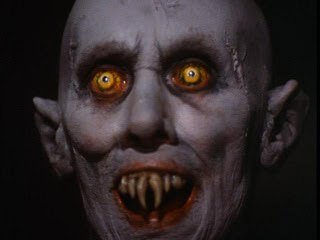 Barlow’s death at the hands of David soul is one of the best vampire killings ever committed to film. 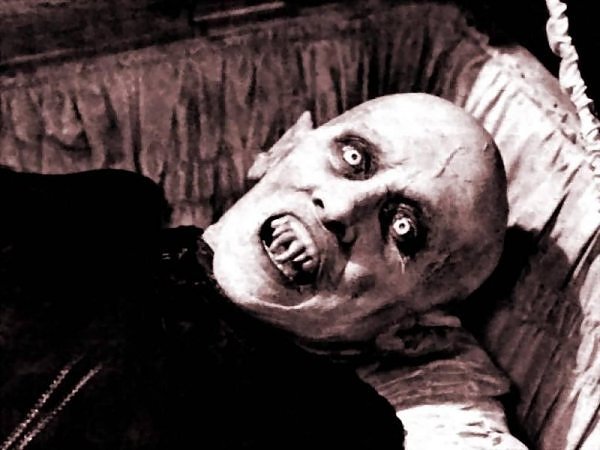 The ensemble cast is what makes this delicious cheese. Fred Willard, Ed Flanders, Bonnie Bedelia work alongside George Dzunzda, Geoffrey Lewis, Lew Ayres, Julie Cobb and “A-Number One” character actor, Kenneth McKillen (Baron Harkonen from 1984’s Dune). Add in some superb no name actors and the teen heartthrob (turned religious purveyor) Lance Kerwin (fresh off James At 16, the brief hit teen angst show) and you got yourself a tidy horror flick that pushed the boundaries of network TV.

This is not a classic or the best vampire film, but hot damn is this is a hoot. Such wonderful scenery chewing by Mason tempers David Soul’s burning desire to go full Shatner and overact into a frenzy. You can see Soul trying with everything he has to keep it together. He just wants to shout and scream and flip out and tell everyone “The vampires are coming! The vampires are coming!” And you see what he can do in the morgue scene as he blesses a home made cross as a dead Mrs. Glick slowly reanimates on the table before him. They shot most of the film in Oregon and the Marsten House is an obvious mock up, robbing it of some of its true eeriness. But that’s okay. We got James Mason schooling a local cop Italian and the meaning of the word, “ciao.” We got Fred Willard in silk, hot red boxers putting a double barrel shotgun in his mouth while on his knees begging for his life. There’s David Soul staring heavily at everyone while his eyes scream: “sonofabitch what I gotta say is important!” 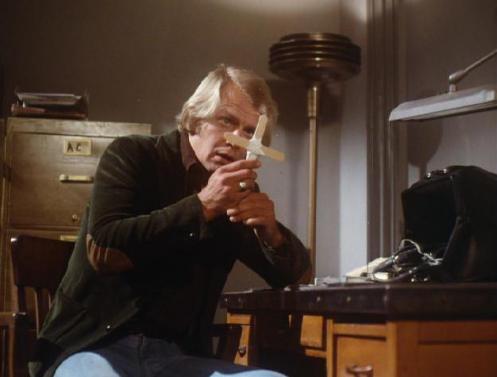 We have Barlow, a Vulcan ear-tipped, blue meanie who screws everything up for this little town. It’s a shame to miss some of the other characters from the book, including that wonderful school bus scene, but all is forgiven. Lance Kerwin has a great moment when he looks at his dead parents on their kitchen floor, slain by the evil Barlow and tells him “I’m gonna kill you!”

And we believe him.

Floating, hissing vampires, holy water flying all over, stakes in hearts, David Soul…this is what a vampire movie should be and despite its flaws, I’d rather sit in Hell forced to watch this back to back for eternity than spend 2 hours in any one of the Twilight films.

Fangs for the memories, Salem’s Lot.

← Prev: Is The Conjuring 2 Featuring The Warren's Amityville Horror Investigation ? Next: From The Executive Producer Of The Stranger Comes Anguish, Inspired By True Events →