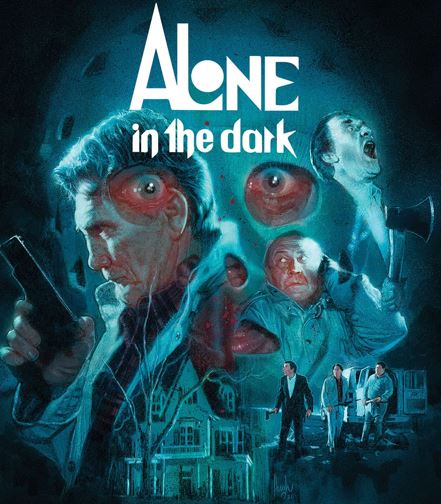 Speaking of the ol’ Haven, those hallowed halls are also home to some real Grade-A psychos: deranged army vet Frank (Jack Palance), church burner Byron “Preacher” Sutcliff (Martin Landau), mountain-sized pedo Ronald (The Running Man‘s opera-singing one man E.L.O.; Dynamo, Erland van Lidth), and selfie-adverse serial killer nicknamed “the Bleeder” (Phillip Clark, who’s character dons a hockey mask to do his dirty dealings… just like Jason Voorhees did in Friday the 13th: Part 3-D, released just a few months earlier…but who was first is a topic of debate); a qwazy quartet that believe Potter murdered their former doctor (whom they all loved), but who in truth took another job.

As fate would have it, a major power outage looms in Potter’s future, and the resulting blackout and riots make it easy as a piece o’ poison pie for those lasceratin’ lads to make their escape… and once sprung, they quickly become armed and begin doing all manner of murder biz about town on their way to settle their imaginary score with Potter!

Kicking off the main contributing factor to that bit of business is the fucking acting.

You have Martin Landau, Donald Pleasence (doing more of his world famous “screamin’ from the bushes” routine made popular in the aforementioned John Carpenter flick he co-starred in back ’78 way), and Jack Palance having an unbelievable Duel of the Hams throughout… but it’s us with their putrid peepers on the film who eat best of all as these dudes are dynamite every time they are on screen!

There is also a punk band called Sic F*cks (their spelling, not mine) who perform in a New Wave club while people slamdance in see thru-shirts… oh, and there is a piece of audio looped while a man dies hanging from a tree (who later appears to be delivering reems of dialog, but there’s no audio)… that kinda shit always cracks my arcane ass up… like “Hey, Arline Garson, you didn’t notice that shit while you were editing this fright flick… by hand… probably under a huge deadline, for crap pay”… shit… no, wait; it’s still hilarious!

Adding to the fun here is a fun third act plot twist, a great suspense sequence involving a killer trying to impale a comely young lass with a rather large knife from under a bed, and an ending denouement sequence that will have you rolling in the aisles!

So, the main event is obviously fucking entertaining as all hell, but the special features ol’ Scream Factory have assembled for this Blu-ray really add to the fun!

First up comes two audio commentaries; one a conversation with the film’s co-writer/director Jack Sholder (who would next helm 1985’s A Nightmare on Elm Street 2: Freddy’s Revenge) as he takes us through the film’s production from top to bottom with plenty of first hand anecdotes, and the other being a chat featuring film critic Justin Kerswell and film historian Amanda Reyes who provide an analysis both scholarly and from the fan’s perspective!

Also included are: the film’s theatrical trailer, TV spot, a collection of radio spots, and a gallery of promotional images.

Often overlooked, Alone in the Dark is an irresistible blast of stalk n’ slay perfection, mixed with a fantastic early ’80s time capsule and shouldn’t be missed by slasher aficionados (and NYC punk fans)!

← Prev: ‘Paranormal Activity: Next Of Kin’ Trailer Takes Us To Amish Country Next: New Trailer For British Horror ‘Barun and the House of the Cliff’ →