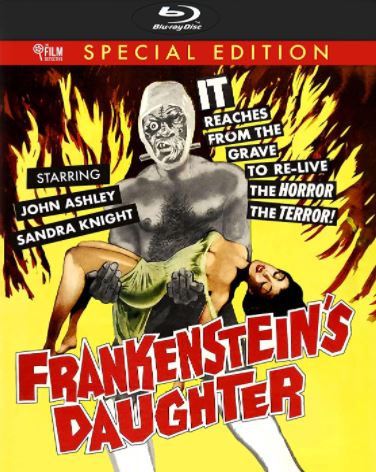 Trudy Morton (Sandra Knight) is having some real horror humdinger nightmares in which she pictures herself as a monster out on the town, but it certainly won’t stand in the way of a good game of tennis… as it shouldn’t.

The gaggle of Grease cast members she calls friends think it’s all a load of bullshit, except for Trudy’s frenemy Suzie (Sally Todd), who experienced the same “dream”.

As fate would have it, the elderly scientist uncle Trudy lives with, Carter Morgan (Felix Maurice Locher) by name, has a real douchebag of a lab assistant; the rude-as-fuck, Felix Flankin lookin’ motherfucker Oliver Frank (Donald Murphy)… short for Frankenstein ‘natch… who is working a side-hustle in the lab; making a “female” creature out of random body-parts (no surprise given Oliver’s family history) while Carter aims to eliminate all disease in the world.

Oh, and Oliver has been spiking Trudy’s daily fruit punch with a formula that turns her into a scantily glad roaming lunatic with a body that’s delightful, and a face that’s fuckin’ frightful!

Anyway, soon the town Trudy calls home is balls-deep in Franken-fracases from which they may never recover!

Frankenstein’s Daughter is two things; an effective and fun lil’ drive-in creature feature romp and completely ridiculous… oh and partially padded more than a bra on prom night. Let’s break that shit down…

Why is the film effective? well, the cast is pretty damn solid, with Knight making for a lovable and spritely, if troubled, teen lead, and Murphy delivering cold menace and inhumanity in his heel turn as the descendent of Frankenstein. Also, for the most part the film glides right along at a nice clip, with plenty of monster action, double-dealin’, and even some groovy early gore effects!

As for the ridiculous, you may have noticed I used those quotation marks around “female” when describing the creature… well, the mask and suit were made for and performed by a man… and not a small one either… so to hear Frankenstein laud it’s feminine ways will doubtless have you rollin’ in the aisle same as yours cruelly (while simultaneously cringin’ from that good ol’ misogyny)!

Finally “padded”… in a tradition dating back to that Bavarian motherfucker in 1943’s Frankenstein Meets The Wolfman, there is a long-ass musical number tossed in here to doubtless make the film’s runtime, and maybe sell a record or two to feed that publicity machine. And what earworms Page Cavanaugh and His Trio’s (feat. Harold Lloyd Jr.) “Daddy-Bird” and “Special Date” are… well maybe a giant, pinching earwig might be more accurate…

As for special features… well, there’s a bit of a fuck up in the menus/packaging with this Blu-ray release from The Film Detective (at least in the copy I received for review). To wit: the sleeve promises two audio commentaries; one from film historian Tom Weaver, and the other from filmmaker Larry Blamire (The Lost Skeleton of Cadavra), while the disc’s menu claims there is an audio commentary from Jason A. Ney.

So which is true? Well, there is one commentary track, featuring Weaver (who delivers his dependable mix of wise-assery, non-P.C. rhetoric, and fascinating details about the film’s production) joined in segments by Blamire. So now you can rest easy cats n’ creeps.

Also included are an early ’90s VHS-recorded interview with Richard E. Cunha (responding on camera to questions supplied by Weaver) that provides a retrospective of the filmmakers career straight from the horse’s mouth, as well as an overview of actor John Ashley’s career courtesy of film historian C, Courtney Joyner.

Also included is a full-color Booklet with an essay from Weaver.

A fine drive-in creature feature; Frankenstein’s Daughter is fast-paced, occasionally hilarious, and most importantly; a ton of frightful fun!