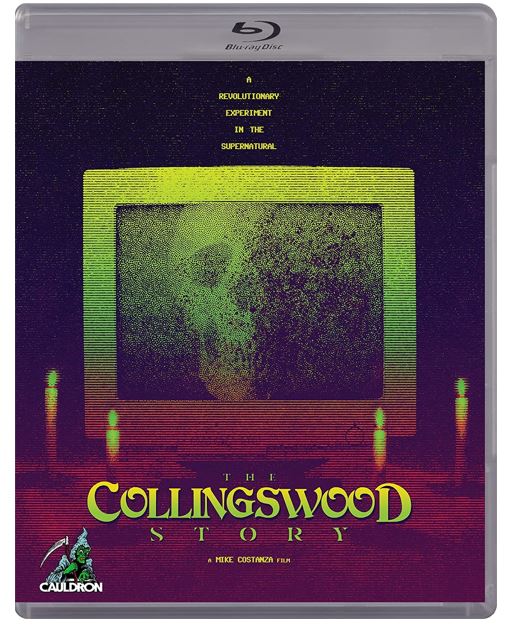 Rebecca (Stephanie Dees) is more than anxious to get the hell out of dodge and take up residence in a new off campus apartment house many states away from her hometown`. Thankfully she can still keep in touch with her Juggalo townie potential love interest Johnny (Johnny Burton) via a webcam based video messaging service (more on that in a bit).

Speaking of Johnny, that hombre does not trust Rebecca a single bit… thanks in part to the advice of his perpetually wasted-off-his-ass buddy Billy (Grant Edmonds and his balls), so he decides to hire an online psychic, Madam Vera (Diane Behrens) to hopefully straighten things out (an amateur Don Ho and the American antecedent to Alan Moore are also involved).

Of course this all goes completely to shit, as the psychic reveals that Rebecca has just moved to the most evil place in all of New Jersey… and that’s sayin’ somethin’… Collingswood (a mere “G” away from a Dan Curtis based lawsuit… just kidding, I know it’s a real place you terror turds!); a hotbed of occult activity and murder in years past… and as the night progresses, that past may become the present for Rebecca!

While revolutionary for 2002 (though shot a few years earlier), the antiquated video messaging (and search engine) on display throughout The Collingswood Story, and Rebecca’s wonder over it, is side-splittingly hilarious. You know damn well we were expected to go on a journey with The Becker where we learn about new technology arm in arm along with her… to make her relatable and all that. Now it just looks like Rebecca has mild brain damage of some variety when viewed with modern eyes… which will soon become dated as well… the times, the times…

And while you’ll definitely be rolling in the aisles over some of it, this use of tech was actually super-fuckin’-innovative for when this fright flick was made, so kudos to writer/director Michael Costanza on that, as well as for building a believable monstrous mythology for the supernatural shenanigans at hand.

And the world building isn’t the only thing tight and outta sight about this found footage fright flick, as the narrative is both super engaging, and is filled with a good dose of well-done mounting tension. The acting is also on point with both leads being relatable (huh, I guess that “learning tech” thing worked after all… ), believably terrified, and suitably sympathetic… but the real scene stealer in that department is Behrens as Vera Madeline, the sunglasses wearing, black clad psychic that constantly proclaims in her pre-recorded intro (another great bit) how peaceful she is, but comes across as a complete menacing figure thanks to her pitch black surroundings, candelabras (don’t laugh… shit gets serious when those bastards are involved), and Anton LaVey-level showmanship. Absolute perfection there folks!

Enhancing all of this are the bonus features Cauldron have included on this Blu-ray release, namely: an excellent audio commentary with Costanza where he offers a thoughtful and fascinating journey through the film’s production and the challenges faced while utilizing the technology of the day (though he does narrate the action on screen a tad too much), a “making of” featurette, archival interviews with Dees, Burton, and Edmonds, an image gallery, and the film’s trailer.

One of the best found footage flicks I’d never heard of, The Collingswood Story is a suspense filled tale of an ancient supernatural evil aided and abetted my “modern” technology and shouldn’t be missed by fans of the genre!