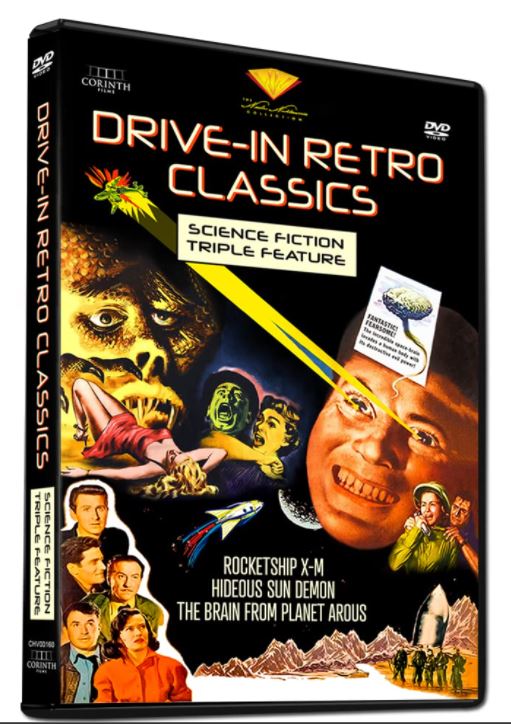 Let’s get this revoltin’ review sesh a rollin’ as we set our putrid peepers on Rocketship X-M:

Humanity stands poised to land the first men (four of them actually… and a woman too; will wonders never cease?!!) on the moon thanks to the experimental rocket, RX-M (Rocketship Expedition-Moon). After encountering a mishap or two, the rocket goes a wee bit off course and actually lands on Mars!

Once there, our heroes encounter traces of a once great civilization now reduced to a pile o’ crap, and the Martians themselves have devolved into crazed, radiation scarred cavemen! I’m sure a crew equipped to handle exploring a desolate, empty moon will have no trouble handling this unbelievable occurrence!

The main fun to be had with Rocketship X-M is that the picture makes some bold attempts to explain the now impossibly dated science that populates the film with thought given to how gravity would effect the ship, and what the atmosphere of Mars was like (to name a few)… hell, even some social commentary on the threat of nuclear war is proffered up (which at the time of this writing is unfortunately very relevant).

The cast on hand is strong and natural as well, with the exception of the usually top-shelf Lloyd Bridges who here comes of as an over-the-top cocky prick, and while this is enjoyable at time in it’s brashness, it stands in stark contrast to the sedate acting of the other members of the cast (minus those cave people, those mother fuckers are out-of-control).

All in all, director Kurt Neumann (who also co-wrote the picture) gives us a solid enough pre-cold War space race romp that features some entertaining concepts and visuals (especially in the nice touch of the black and white picture tinted red once the crew touchdown on the surface of Mars).

Moving on we arrive in creature feature country courtesy of The Hideous Sun Demon:

As treatment for his radiation exposure, Gil is prescribed time soaking up the sun’s rays in a solarium, and instead of dying from the cancer from the radiation and the sun like anyone… literally anyone would expect, Gil turns into a lizard creature which is admittedly no good.

With sunlight now being completely out of the question for our hero, he naturally decides to hole up in his house and become a world-class alcoholic, and I’ve never felt so damn seen in my whole entire fuckin’ life.

Will science find a cure for Gil, or will his life consist of heat rocks and Maker’s Mark for the rest of his days?

Now this is more like it! i know it may seem strange to some, but I think Rocketship X-M was a tad too classy for a collection of drive-in flicks… but the complete nonsense that is The Hideous Sun Demon well and truly satisfied the ol’ cheese tooth!

First of all, the “science” on display is complete horseshit, which is a good thing because I don’t want a science lecture, I want grossly misidentified slides of insects (you’ll absolutely lose your damn mind when you see the “mutated grasshopper”) and a lizard-man on a downward spiral making sexy with the blousey singer from the dive bar down the street (unfortunately not in lizard mode, this isn’t fuckin’ Humanoids From the Deep… ).

Also of note is the absolutely kick-ass creature design courtesy of an uncredited Richard Cassarino which features an impressive amount of scaly detail and a mouth that is the stuff of nightmares… and I’d be remiss if I didn’t mention the way-too emotional performance from Clarke that would make classic Shatner blush.

In short, The Hideous Sun Demon is classic creature feature goodness loaded with cheap T&A, a great monster, and some scenery chewing, and that is a recipe for a perfect movie night for this monsterkid!

Last up comes The Brain From Planet Arous:

After some patented ’50s era wise-assin’ and a trek through the desert, Steve March (John Agar) becomes possessed by an evil brain from outer space with bedroom eyes named Gor (voiced by Dale Tate and supplemented by non-stop War of the Worlds noises).

At first Steve/Gor is just an animal abusing handsy creep, but before long he sets his sights higher and begins threatening the entire world with his evil machinations, all realized through the glory of that sweet, sweet stock footage.

Remember how I said The Hideous Sun Demon was everything an enjoyable creature feature should be? Well double that and you get The Brain From Planet Arous!

You read that deliriously daffy sinister synopsis up top, so you already know that this sci-fi shocker has a hell of a yarn to spin, and boy-fucking-howdy does it ever! Add in some groovy creature designs for our creepy cerebrum, and another effective use of those foil contact lenses Commander Mitchell sported on Star Trek‘s second pilot, Where No Man Has Gone Before.

The real heavy lifting here however is done by Agar who is amiable as March, and completely full-on super-villain when controlled by Gor. It’s a fun performance, and it truly seems like the actor is eating the whole thing up with a spoon!

Taken as a whole, the Drive-In Retro Classics: Science Fiction Triple Feature is well worth your time; you get three rather fantastic sci-fi flicks from the golden age of sci-fi cinema for under 20 bucks, and all three run under 80 minutes apiece so you can easily make a night of it!

← Prev: Jennifer Tilly Returning For Season 2 Of "Chucky" Next: Here's Everything We Know So Far About Season 2 Of "The Wheel Of Time" →