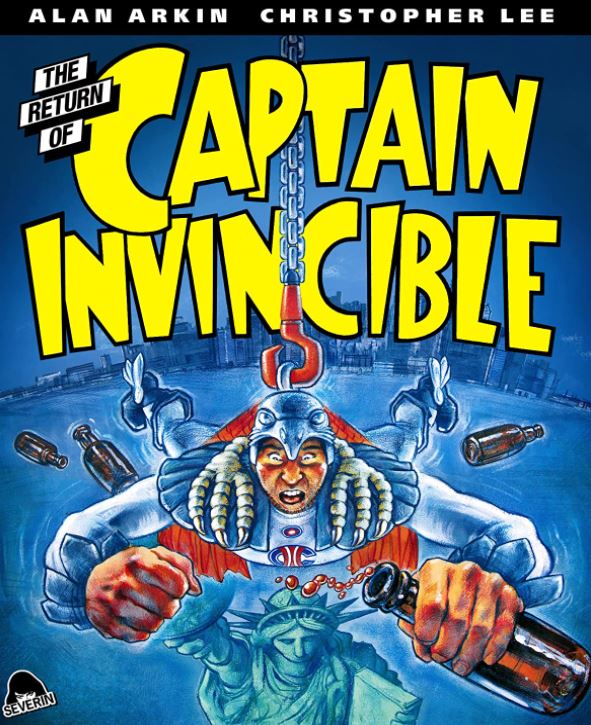 Before long we see the good Captain catching static during the McCarthy witch-hunt for red sympathizers, after which he vanishes from the public eye to become a drunk nomad in the wilds of Australia.

Fast forward to the early 1980’s (and cue the disco take on the Theme From Peter Gunn) and we learn after two musical numbers… one comprised strictly of the word “bullshit”, and the other a jaunty gospel number which comes complete with it’s own band (which is odd since the scene in question takes place in a top-secret government war room) that a powerful hypno-ray has turned up missing, and those same official officials, including the President (Michael Pate) himself (the same cat responsible for those swingin’ songs mentioned previous) want Captain Invincible to sober up and go find the damn thing… which he does after a somber country-western number (if you haven’t guessed, this film is a musical) and a pep talk.

They’ll need him too, as the one who stole said device is the super villain Mr. Midnight (the legend of legends, Sir Christopher Lee… Hammer’s Dracula series, Peter Jackson’s Lord of the Rings trilogy, and countless, countless more!) who along with his cadre of henchmen, exotic pets, flame shooting Volkswagens, sexy femme fatale dancers, killer vacuum cleaners, housing schemes, and an off-key singing alien cohort named Julius may spell the end for our over-the-hill hero and his detective gal pal Patty (Kate Fitzpatrick)!

Directed by Philippe Mora (Howling II and III, the adaptation of Whitely Strieber’s alien abduction account, Communion) from a screenplay by Steven E. de Souza (Die Hard), The Return of Captain Invincible, is unlike anything you have ever seen, and that is a fuckin’ stone cold promise… and it’s all positively brilliant!

About those numbers, many of them were written by none other than Rocky Horror creator Richard O’Brien (along with his composer Richard Hartley), and they are pretty damn fantastic and leans more towards their material from 1981’s vastly-underrated Shock Treatment style-wise here).

It’s all just a brash, wild, off-the-rails affair filled with all of the garish colors, (intentionally) scenery chewing performances, and derring-do of a classic four-color yarn! Shit, I forgot to mention the alien-assisted sex scene…

All of this insanity looks absolutely amazing on this Blu-ray release from Severin, with a crystal clear image with astounding colors and rich tones that make the film look absolutely new and pristine!

Adding to the fun comes a powerful array of bonus material featuring interviews with producer Andrew Gaty, cinematographer Mike Molloy (who has no love for the creation of the film’s front projection techniques utilized for the film’s flying sequences), actress Fitzpatrick, and actor Chris Haywood, as well as an interview and (a lip-synched) musical performance by Christopher Lee from German TV (where they claim his character is a descendent of Dracula while tossing out a homophobic slur for fun… ah, those ’80s vibes), an alternate opening title sequence (featuring the moniker Legend in Tights), and the film’s trailer!

And that’s just disc one…

Speaking of the director, this disc brings us a great audio commentary courtesy of Mora And Not Quite Hollywood Director Mark Hartley that takes us through the film’s production in detail with plenty of anecdotes along the way… it’s a fascinating listen devoid of those dreaded “dead spots” some commentaries suffer from.

Also included on this disc are interviews about the film featuring Mora in conversation with de Souza and film historian/former Beat the Geeks star Marc Edward Heuck.

Disc three includes the film’s stellar soundtrack, and believe me you’ll be spinnin’ this one often after getting these slappin’ songs in your eerie earholes!

Rounding out the package are a slipcase and reversible sleeve, all displaying differing promotional artwork for the film, and a postcard containing yet more promo art, and a track listing for the aforementioned soundtrack.

The Return of Captain Invincible is bawdy, bombastic, and absolutely brilliant… and that is no bullshit! Seriously cats n’ creeps, if you dig on postmodern takes on the old capes and tights set you need to snap this up immediately!