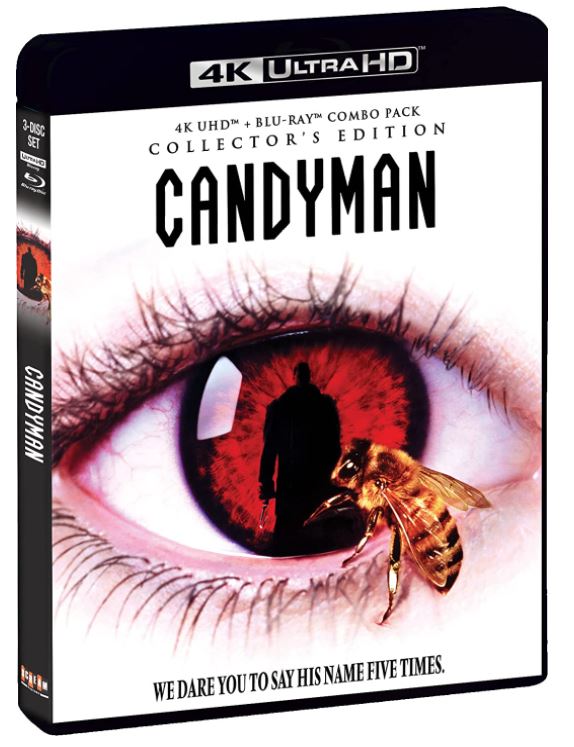 Helen (Virginia Madsen) and her friend Bernadette (Kasi Lemmons) are just a couple o’ ladies on their way to complete a thesis at the college they attend… a thesis revolving around the local urban legend of a supernatural menace known as the Candyman (the legendary Tony Todd) who has been rumored to stalk the absolute living nightmare of the tenements of Chicago’s Cabrini-Green if anyone is foolish enough to utter his name five times before a mirror.

And why wouldn’t they strut right on into the horribly depressed an violent projects? I mean besides the dangerous fellows out front, there’s the matter of the very real titular grotesquery; a son of a slave that was murdered for falling in love with a white woman who has come back from the dead with a real hatred for… well, everyone. Add in his meat hook hand, and belly full of bees guaranteed to take your ass out like My Girl-style Macaulay Culkin, and you have some bad times ahead amigo.

Before long Helen is deep within the clutches of evil as the Candyman enters (and fucks up) her life in a major way resulting in her being at the center of murder, child abduction, incarceration… and things spiral ever downward from there.

Let’s just get this out of the way; Candyman is the fuckin’ bee’s knees… and the rest of that mother fucker too! So much works in the film’s favor: it’s based The Forbidden, a story from the poison pen of horror maestro Clive Barker (Hellraiser, Nightbreed), it has amazing performances from Madsen and Todd, the later of which adds gravitas and poetry to a monster that could easily have been a Freddy knock-off if not handled properly, it has a unique and terrifying setting, it’s never afraid to absolutely brutalize it’s characters… it’s a bold mix that is unflinching in it’s portrayal of horror both preternatural and real world.

Additionally, writer/director Bernard Rose keeps things stylish, and never fails to present the grotesque as it’s own special kind of beautiful, and the ethereal score by composer Philip Glass gives the proceedings a dark, gothic fairy tale vibe that suits the tale of a doomed monster haunting a dilapidated, ancient structure and the woman he loves… as a victim sure, but he digs her!

Speaking of beautiful, the new 4K master taken from the film’s original negative (which was overseen by Rose and director of photography, Anthony Richmond) is rock solid and presents tons of image detail in crystal clarity, with a moderate amount of film grain noise, and nice, rich blacks that create those dreaded shadows the Candyman emerges from so often. Having previously viewed the film on DVD (not to mention the VHS copy I owned in the olden days) the presentation is stunning to say the least.

This new edition of Candyman is released via Scream Factory, and those magnificent bastards have loaded this release with a haunted hive of bonus content!

Disc one (of three) includes the 4K-UHD version of the film which features both a director’s cut and theatrical cut of the film, as well as two audio commentaries; one from Rose and Todd who take a thoughtful look back at the film’s production, and one from authors Stephen Jones and Kim Newman which features a friendly conversation about the film and it’s themes, not to mention the times in which it was released (the early ’90s to be precise). Additionally the film’s trailer is included as well.

Disc two contains a Blu-ray of the theatrical cut that features the previously mentioned commentaries, as well as two additional chats featuring Rose, Barker, Todd, Madsen, Lemmons, and producer Alan Poul, and the other with Rose moderated by filmmakers moderated by Adam Green and Joe Lynch.

Also included are: a look at the film’s mythos, interviews with Barker and Todd, a collection of Rose’s storyboards, the film’s theatrical trailer, a handful of TV spots, a still gallery, and the film’s script (on BD-ROM).

Disc three contains a Blu-ray of the directors cut along with: interviews with actress Vanessa Williams, Todd (yet again!), Madsen, Lemmons, and actor Dejuan Guy, looks at the film’s production design and make-up FX, an examination of Barker’s original story, and look at the film from the Black perspective.

Easily one of, if not THE best fright flicks of the 1990’s, Candyman is a horror biz knock-out that delivers the scares while beautifully adapting Barker’s original story, as it adds to it in a natural way.