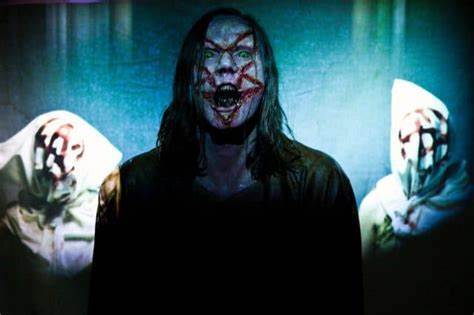 Filming has officially wrapped on the reimagining of the 2014 critically-acclaimed and terrifying horror film, Last Shift, from Anthony DiBlasi and Scott Poiley, the filmmakers behind the original.

The film centers on a police officer on her first day working on the last shift at a newly decommissioned police station in an attempt to uncover the mysterious connection between her father’s death and a vicious cult. Throughout the night, she finds herself plagued by terrifying supernatural events while discovering the truth about her family’s twisted past.

Last Shift marks the first film from Welcome Villain Films and will likely be released sometime in early 2023.

“The world Scott and I envisioned for this story was always meant to be a dark, twisted rollercoaster through Hell, and partnering with Welcome Villain allowed us to fully realize our vision without the limitations we faced with the original film,” says filmmaker Anthony DiBlasi. “The practical effects, authentic locations, incredible cast, and unwavering support from team Villain propelled this project to an entirely new level that we hope will more than satisfy existing fans and new fans alike.”

“This has been such a wild and fun project to be part of, and working with Anthony and the team has been amazing,” says Jessica Sula. “It was a rewarding challenge to take on this role and bring something new and unexpected to the character, and I think this movie will definitely give audiences a good scare!”

“Moviegoers should buckle up and prepare for a vicious, unrelenting nightmare with a powerhouse leading performance from the supremely talented Jessica Sula. Regardless of your expectations for this film, I promise you, you’re not ready for what’s in store.” Luke LaBeau of Welcome Villain Head of Development states.

Here’s a look back at the original film’s trailer. If you haven’t seen the original we highly recommend you do so. You can watch it now on Prime Video or free on Roku, VUDU, Tubi TV, or on Pluto TV.

← Prev: Comic 'The Silencers: The Definitive Edition' Is Out Today! (Preview) Next: Movie Review: You Need To Sink Your Fangs Into 'House Of Darkness' →