An Interview With Actor-Writer-Director Jose Prendes

Tonight, I had the pleasure of speaking with actor-writer-director Jose Prendes. Prendes has several films and series on his resume. He co-stared in ‘The Horror Geeks’, ‘Airplane vs. Volcano’ and ‘The Day the Earth Stopped’, Prendes has written films such as the upcoming dark horror film ‘Blood Brothers’,  ‘Hansel & Gretel’ (2013),’ The Haunting of Whaley House’, ‘Haunting of Winchester House’, ‘Corpses Are Forever’, ‘Song of the Vampire’ and the film ‘Mega Shark vs. Mecha Shark’ for the Syfy Channel. He was in the director’s chair for ‘Blood Brothers’, ‘The Haunting of Whaley House’ and others.

Horror Fuel: “How did you get into directing?”

JP: “I was an only child, and I lost my parents very early. I sort of felt disconnected to the world and reality. There was something about movies and books the are for escape. I took advantage of that and fell in love with this dream world. So, they became such a big part of my life early on, I knew I wanted to be a part of that. I want to be able to contribute my dreams, I guess, to this art form that meant so much to me through those really hard times and loneliness. The least I could do is dedicate me life to preserving it and continuing this beautiful art form. At first I wanted to be an actor and I’ve done that here and there. When I really discovered writing I realized that real power is story-telling, so I want to be the writer and director. Early on, I think I before my friends in school knew what they wanted to be I knew movies were going to be it.”

Horror Fuel: “You both wrote and directed The Haunting of Wheley House, what inspired the story?”

JP: “The studio wanted to make a haunted house film based on a real haunted location. I pitched a couple of ideas, one of them was based on the Wheley house in San Diego. It’s considered by many people to be the most haunted house in America. I wanted to throw that idea in the ring as a possibility and they liked that it was well known among paranormal fans. That’s where the inspiration came from, the tragedies that took place in the Wheley house and to the Wheley family, the hauntings that have been reported. We spun it a little more fantastic as movies usually do.”

Horror Fuel: “You also wrote Mega Shark vs. Mecha Shark. What was that like?”

JP: “The studio came to me with idea. It is the third film of the franchise. In the first film he fought an Octopus and in the second one I believe he fought a crocodile. They wanted him to fight a metal shark. They had the idea I just had to make it somewhat more plausible. That was both the fun part and the most difficult part.”

Horror Fuel: “How did Blood Brothers come to be?”

JP: “It was based on the 1924 murder trial of Nathan Leopold and Richard Loeb, who are very well known in serial killer history. In real life, they were gay lovers who thought they had the world’s highest IQ. They thought the were better than the common man.  They decided to prove it by committing the perfect murder as an intellectual exorcise. They actually end up killing an eight year-old boy, which is really tragic. I actually dedicated the film to that boy. Eventually they get caught because of a stupid mistake, and they are arrested and go to trail. I believe they are on death row. That’s sort of the nugget of where that came from. Before I wrote the movie I saw Hichcock’s Rope which is basically a retelling of that story. Another movie I love is Compulsion with Orson Welles and it’s basically the most accurate telling of that story.   I invited over my producer one night and told him that” I have always wanted to make something like this, but modernize it.” I wanted to make it a little Lynchy. I wanted to tell the story, but not the death of a kid. I wanted to explore the aspect of these two killers, instead make them brothers and explore the whole nature vs. nurture thing. That’s where that came from.”

Horror Fuel: “Tell us about Thomas and Charles, the brothers in Blood Brothers.”

JP: “Thomas, played by Jon Kondelik, starts the movie as the alpha male. He’s the engine driving the crazy train. Charles (Graham Denman) is meek. He’s the younger brother. He’s fallen under the shadow of his big brother. What ever Thomas says has to be correct. Charles is the favorite of their mother, who is the only living family member they have. Thomas is the one that the mother doesn’t like at all and resents Charles because his brother has their mother’s love. I think that adds to Thomas’ anger, his anger at his mother and his anger at the world. They are very much yin and yang. As the movie develops both actors get to explore both sides of that existence. I didn’t want it to be the average serial killer movie. I wanted to make an existential examination of what it means to take a life and it changes you. ”

Horror Fuel: “What are you working on now?”

JP: “Right now I’m very busy. I just published two books. My first two nonfiction books. One is called The High Concept Massacre which is 13 interviews with genre screenwriters. I’ve got everyone from Carl Gottlieb who wrote Jaws to the guy who wrote Tremors, to the guy who wrote Die Hard 2, about what a screenwriting career is really like. It was a lot of fun to put together but it is kind of scary for anyone thinking of becoming a screenwriter. I think there is a lot of good information in it that will prepare anyone for the better or worse. The other one I published came out on Halloween. It’s an Are You Afraid of the Dark companion. It’s an interview book/episode guide for the beloved series.

As for movies, I’m working on something now that is very different from Blood Brothers. I need to take a break from the bleakness so I’m doing a comedy. It’s a mockumentary called The Unspeakable Horror of the Plan 9 Conspiracy. It takes a Room 237 like approach to Plan 9 From Outer Space. We’ve awesome people like Nick Garass, Joe Dante, Tom Holland. They come in and I interview them and they go along with this whole scenario that Ed Wood has this secret meaning buried in this movie that is considered the worst movie ever made. That’s what I’m working on right now.”

Horror Fuel: “If you had any advice for budding screenwriters what would it be?”

JP: “Simple, this is not an easy career. This isn’t something where you will lock into a million dollar paycheck. You’ll be lucky if you will be able to pay the rent on time with some of the jobs available. If you love it, and you’ll know you love it, you will feel this fire inside of you. You’ll say ‘That’s it I’m done’ and the next day you’ll wake up and have an idea for a movie and that means you were meant to do it. There’s nothing I can say to inspire you. You were meant to do it. Just keep at it until you die, then you can say you tried.”

JP: “It’s a tie, but I’ll take the high-brow one. I’m going to go with Jaws. I could watch it over and over again. The other is Scream. I think the writing is so great. The characters are so likable.”

You can pick up your copy of Jose’s books ‘The High Concept Massacre‘ and ‘Are You Afraid of the Dark Companion‘ on Amazon now.

← Prev: Go 'Behind The Walls' In This Supernatural Film's First Trailer Next: British Paranormal Thriller 'The Snare' Will Soon Arrive In Theaters And On VOD → 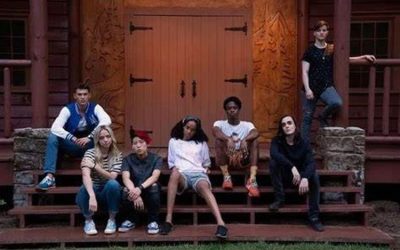