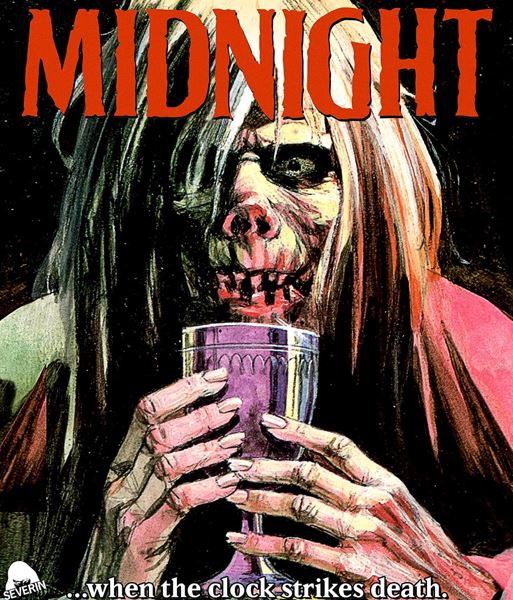 A mother and her offspring murder a little girl (that damn Jimmy Peterson’s sister) caught in a bear trap because they think she’s a demon, and then perform a satanic ritual on the body… “pot, kettle, black” there, eh cats n’ creeps?

Anyway, so begins John Russo’s 1982 opus Midnight, which just so happens to have recently had a spiffy Blu-ray release from the fine fiends over at Severin.

Shoplifting and encounters with hostile rednecks ensue, before our two plots dovetail to the anticipated horror biz!

If Midnight is anything, it’s about as uneven as the country backroads featured in it… good thing it’s entertaining as unholy hell most of the time as well!

The deal is, John Russo (who wrote and directed this picture) wrote 1968’s George Romero ground-breaker, Night of the Living Dead and everything he’s done in it’s wake seems to be an attempt to capture that lightning in a bottle again by mixing and matching social tropes and themes from that flick into new scenarios, rather than let the story be it’s own arcane animal.

What does that mean? Well, before we get to the Satanic goodness we were promised form the get-go, we have to hear treatises on race, youth, religious zealots, and the bleak social scene for modern students… plus a song. All of these are important topics for sure, but to double and triple them up at the sake of reducing the horror on screen (which is mostly relegated to the third act) is a bit of a hiccup to be sure.

Thankfully, there are plenty of positives as well.

Lead actress Verliin is solid, and gives off a real “easy-going”, young Jodie Foster vibe, the actors portraying the all growed-up versions of the kooky kult are great as well (and truly deliver scenes rife with terror and shocking violence), and Tierney does his normal routine, so you can expect some gruff-as-fuck shenanigans there.

Additionally, the cold dreary environs really set a fantastic tone here, as we move from the false security of suburbia, into the wild lands beyond; all dead tress and late Autumn landscapes under steel grey skies, There’s also a streak of brutality present that rears it’s head from time to time to deliver sequences jam-packed with unease and suspense that help add some effective horror to this slow-burn yarn.

Severin have also included some additional bonus content that adds to the over-all enjoyment of the film which is comprised of an isolated score track (remember my wicked words up yonder boils n’ ghouls!) featuring an interviews with Mazzei and actor John Hall, interviews with Russo, legendary producer Sam Sherman, actor John Amplas (who portrays one of the evil cultists in the film), and iconic special make-up effects artist Tom Savini (who did indeed provide the gory ghoulash for ol’ Midnight), an alternate title card displaying the film’s other title; Backwoods Massacre, the picture’s theatrical trailer, and a radio spot.

Midnight is, at the end of the day, a pretty damn fun backwoods fright flick that still manages to have enough of that ol’ ’70s occult cinema feel while showing the transition to the more popular slasher flicks of the day!