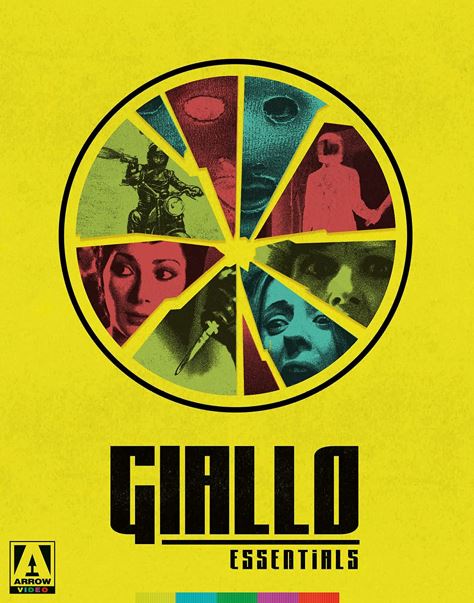 Remember like 5 fuckin’ days ago (give or take) when I reviewed the first edition of Arrow Video’s new Giallo Essentials collections (that one dubbed “red”)? If not head here…

All caught up? Peachy. Let’s dive in to the sinister selections present in round two… the “yellow” set (fitting as how “giallo” literally means “yellow”… but I’ll let you discover the German origins of that one on your own… ), if you will…

After a naked pregnant woman is found hung from the rafters in an attic (and not unlike an overcrowded submarine, she is packed to the gills with semen), Inspector Silvestri (Claudio Cassinelli) and Assistant District Attorney Vittoria Stori (Giovanna Ralli) spring into action.

As the duo dig deeper they discover the victim was part of an under-age teenage prostitution ring whose “clients” (read: abusers) are some of your garden variety high society perverts. As the search widens, the bodies begin piling up…thanks to a motorcycle helmet wearing, cleaver wielding psycho.

Will our heroes be able to keep their body parts intact until the crime is solved?

What Have They Done to Your Daughters? is a damn solid giallo picture, and being such their are a few things you can expect to see…namely excellent practical gore and bloodshed, some detective work through a twist filled plot, and a black gloved, masked killer dispatching folks six ways to Sunday.

Along with that we are treated to some rather spectacular stunt work (especially during a high speed chase involving a police car and a motorcycle), a rather high level of sleaziness in regards to the nature of the crimes at hand, and some solid, somber, acting from Cassinelli and Ralli in the lead roles…all handled with expert care by director Massimo Dallamano .

This being an Arrow Films Blu-ray release, there are some excellent bonus features to back up the frightful feature. First up we get an info packed and highly listenable audio commentary from giallo expert Troy Howarth and an excellent video essay from Kat Ellinger, the editor-in-chief of Diabolique magazine that explores the themes present in the film’s of Dallamano.

Following those are interviews with composer Stelvio Cipriani, editor Antonio Siciliano, a silent selection of unused hardcore footage intended for the film but never used (blowies and bananas abound…but there is a scene with a mask that is so absurd it steals the show), alternate english titles, the film’s theatrical trailer, and an image gallery.

What Have They Done to Your Daughters? is a great entry in the giallo entry, and shouldn’t be missed by fans of the genre (especially with the extras present here), but I dare say if you have been curious about gialli but haven’t taken the plunge, this would make a good choice to get your feet wet!

One sick mofo with a twisted fashion sense is murderin’ college co-eds with a black and red ascot, and American exchange student Jane (Suzy Kendall) has a notion in her noggin that she has seen that sinister scarf somewhere before.

With that revealed, J-dawg and her gal pals head to a remote villa for safety…but of course that murderous madman is clued in to where the one person that could blow his cover is layin’ low and he brings his horror-biz “A”-game to the countryside, stalkin’ and slayin with wild abandon! Soon Jane finds herself B.D. in a game of killer cat and mouse with the black gloved assailant in a fight for her life!

Director Sergio Martino delivers one hell of a sleazy, violence packed giallo with Torso. Filled with all of the trademarks of the genre; stylish murder set pieces, a black gloved clad killer, et.al.; this entry ups the nudity and sexual content…while still managing to maintain a great sense of mounting suspense (especially during the climax as Jane faces off against our resident psycho), some striking locations, and another memorable soundtrack from those masters of arcane audio; the DeAngelis Brothers (who also provided amazing scores for Yor: the Hunter From the Future, Keoma, Mannaja among many, many more).

Along with the feature, those breathtakin’ beauties at Arrow Video have included some bonus content in this Blu-ray release including: four versions of the film (the original Italian version, a hybrid Italian.english version, and two versions with alternate titles), a scholarly and lively audio commentary by Diabolique editor Kat Ellinger, interviews with Martino, Actor Luc Merenda, Co-writer Ernesto Gastaldi, Filmmaker (and Sergio’s daughter) Federica Martino, Mikel J. Koven, author of La Dolce Morte: Vernacular Cinema and the Italian Giallo Film, a Q&A with Martino, and two trailers for the film.

An often over-looked, yet supremely entertaining, entry in the giallo genre; Torso is a tense thriller packed with suspense, ample amounts of naked flesh, and style to spare and shouldn’t be missed by horror hounds!

Photographer Magda (Edwige Fenech) and her boy toy, the fiery tempered Carlo (Nino Castelnuovo) have got one hell of a sinister situation on their hands; the fashion agency where they work has been suffering a series of those “sex crimes” that are all the rage in Milan these days (perpetrated by a man dressed all in black and topped of by a motorcycle helmet)…and as fate and the script would have it, Carlo is a suspect and Magda a potential victim. Will our dynamic duo be able to crack the case before the body count grows higher?

Speaking of the story, it does tend to go off the rails a bit and features such nonsense as back alley abortions, ridiculous fashion shoots, and one hell of an anti-climatic final reveal…but the layers of kitsch and sleaze more than make-up for that last point.

As for extra features, ol’ Arrow Video has once again done a hero’s job. First up is a new audio commentary by HORRORPEDIA.com s Adrian J. Smith and David Flint that provides n engaging history lesson into the film and it’s place in the giallo genre, followed by an informative video essay from author and critic Kat Ellinger discussing actress Edwige Fenech. Next we get interviews with actor Castelnuovo, actress Erna Schurer, assistant director Daniele Sangiorgi, and actor and production manager Tino Polenghi. Following that comes trailers and an image gallery.

Sexy, lascivious, and oh-so-wrong; Strip Nude for Your Killer is a giallo that is anything but typical and will truly appeal to fans of vintage sleaze, masked slashers, and lovers of the absurd all at once!

← Prev: Game Review: 'Back 4 Blood' Next: Title And Release Date Announced For The English Reboot Of 'Train To Busan' →

Guy Pearce (Momento, The Hurt Locker) stars in the psychological thriller The Infernal Machine, based on “The Hilly...